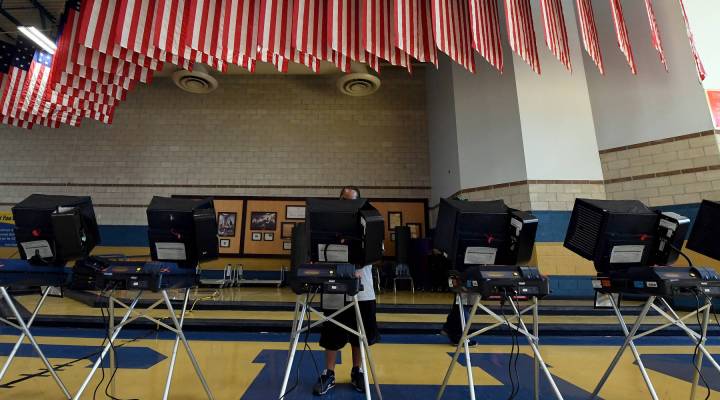 COPY
A voter casts a ballot at a voting machine at a polling station at Cheyenne High School on Election Day on November 8, 2016 in North Las Vegas, Nevada. Ethan Miller/Getty Images

A voter casts a ballot at a voting machine at a polling station at Cheyenne High School on Election Day on November 8, 2016 in North Las Vegas, Nevada. Ethan Miller/Getty Images
Listen Now

A congressional committee has voted to close a federal agency set up to ensure states meet certain standards for voting machines. The agency is called the Election Assistance Commission, and it was set up after the controversial 2000 presidential election in an effort to make sure states have secure, dependable voting equipment.

Remember the 2000 presidential election, that nail-biter between George W. Bush and Al Gore? Florida was the land of hanging chads — little bits of paper left dangling off of improperly punched ballots from voting machines that did not work as intended. Congress responded with legislation that established the Election Assistance Commission.

Now, Republican Rep. Gregg Harper of Mississippi has introduced a bill that would kill the commission. Actually, Harper has introduced this legislation several times.

“It is an agency, a federal agency that has long outlived its usefulness,” he said on the House floor in 2011.

Harper’s office didn’t respond to repeated requests for an interview. But in a statement on his website, he calls the commission a waste of money and says it was supposed to be temporary, closing after three years.

“I think that’s his interpretation,” said Thomas Hicks, the chairman of the Election Assistance Commission. He said commission members are appointed to four-year terms. “And we can be reappointed for another four years. So I don’t know where that three-year number is coming from.”

Hicks said the commission is continuing to do its work, writing updated standards new voting machines will have to meet on things like cyber security. The commission also teaches local elections officials how to keep the old, creaky voting machines they have now safe from, say, Russian hackers.

“Some of these machines might have some form that allows them to talk to other machines or be hooked up to the Internet,” Hicks said. “But we tell folks to make sure that those things are turned off.”

The League of Women Voters said this type of guidance is especially important now.

“We have seen attempts by foreigners to affect the election,” said Lloyd Leonard, the League’s advocacy director. “We believe that our voting machines are secure, and they are. But we need to be on guard.”

Plus, Leonard said, the advanced age of the voting machines we’re using now has led to other controversies about voting access and vote counting.

Leonard said if Congress did kill the Election Assistance Commission, states could still buy new voting machines. But without the commission around to write updated standards,  those machines wouldn’t have to meet any new tests for things like cyber security — or accuracy.