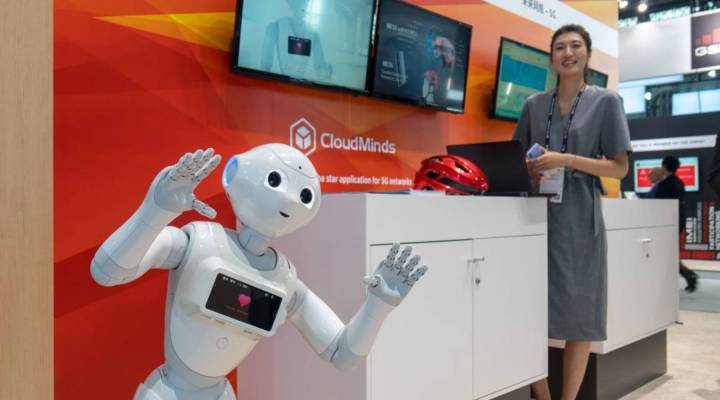 COPY
An AI robot (L) by CloudMinds is seen during the Mobile World Conference in Shanghai on June 27, 2018. AFP/Getty Images

An AI robot (L) by CloudMinds is seen during the Mobile World Conference in Shanghai on June 27, 2018. AFP/Getty Images
Listen Now

There’s a worldwide race for tech dominance, a race that ranges from nanotechnology to quantum computing. China has an explicit policy to be the world’s leader in artificial intelligence, while Israel spends more of its GDP on research and development than any other country. Where does the United States fit into all this? According to Robert Manning, a senior fellow at the Atlantic Council who has been following this race, the U.S. has a lot of catching up to do.

Manning, who also co-authored the report “The Global Innovation Sweepstakes: A Quest to Win the Future” for the Atlantic Council, shared more with Sabri Ben-Achour. Below is an edited transcript of the interview.

Sabri Ben-Achour: You’ve said that this moment in time, this moment in our history, should be another Sputnik moment and that basically we’re failing to see it. What do you mean by all that?

Robert Manning: Well, I think we’re at the beginning of a major transformation and technology revolution that is, by an order of magnitude, more disruptive than the internet revolution 20 years ago. AI, big data, robotics, biotech, nano engineering, nano manufacturing – all these things are converging, and the digital and the real world economy are sort of merging. This revolution will drive economic growth by the late 2020s, 2030s. And so, there’s a race on. Whoever is best at creating and adapting these technologies will be in the strongest position and certainly the most prosperous in terms of their people.

Ben-Achour: The federal deputy chief technology officer, Michael Kratsios, has said he’s very confident in the U.S. ability, and we’re doubling down on ensuring our next great inventions are developed here in the U.S. Do you think that confidence is maybe a little misplaced?

Manning: Let me be kind and say it’s way overly optimistic. If you look, for example, at graduates in science, math and engineering, the vast majority – probably more than three quarters of them – are foreign students. After Sputnik, we created NASA, we put money into basic R&D, and we put a big emphasis on channeling students into these areas. We’re not doing that. We haven’t had a leadership that’s mobilizing the public to move in this direction. We need to rethink our education and training system. We need to have a better social safety net, there’s a whole range of things we need to do, and that’s going to require a lot of public and private partnership. And I don’t see any sense of urgency out there.

Ben-Achour: What happens if China wins?

Manning: I think we need to be careful. It’s not like somebody wins absolutely and somebody loses, it’s just they’re going to they’re going to do better, they’re going to be in a stronger geopolitical position, and that will probably play out in ways we haven’t really thought about yet. If we don’t get wise to these trends that are reshaping our economy and are going to affect the way we work, the way we live and everything else, the future is going to take us by surprise.