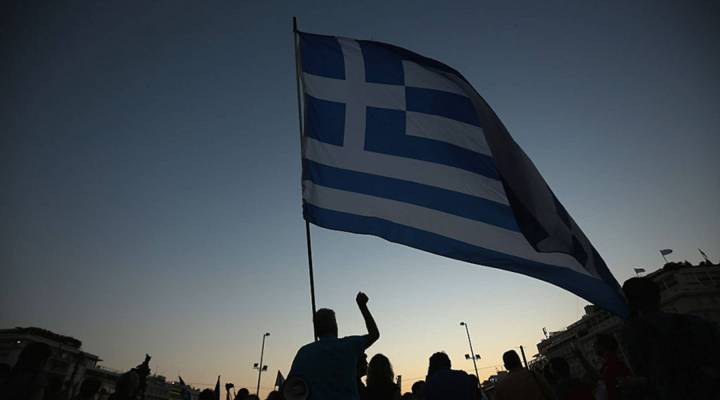 COPY
A man waves a Greek flag in front of the Greek parliament during a pro-European rally on July 9, 2015 in Athens, Greece. Christopher Furlong/Getty Images

A man waves a Greek flag in front of the Greek parliament during a pro-European rally on July 9, 2015 in Athens, Greece. Christopher Furlong/Getty Images
Listen Now

Monday, Aug. 20, is Bailout Exit Day for Greece. The country’s prime minister has described Greece’s exit from a long bailout program as a moment of liberation. “Greece is regaining its political and economic independence,” Alexis Tsipras said, as he predicted a rosy future for the eurozone’s most heavily-indebted member state.

Not all his fellow citizens are so optimistic.

“Basically, what is going to happen when we leave the bailout is that we stop borrowing money at 0.5 percent from our eurozone partners and start borrowing on the bond market at 4.5 percent,” said Nicos Voglis, boss of a sandwich bar in central Athens. “I don’t think that is anything to celebrate. It’s not something to have a party about. Come on!” he said.

Like many Greeks, Voglis does not believe the country has reformed itself sufficiently. He doesn’t think it is a fit state to go it alone.

The creditors don’t seem to think so either. Firstly, they’ve lent Greece an extra $25 billion so that it doesn’t have to resort to the financial markets in the immediate future. And they’ve required the country to stick to a very strict program of austerity, reform and big budget surpluses that could last for more than 40 years. This all adds up to a continuing, heavy burden of taxation for the Greeks.

“Seventy percent of my earnings go to the government. Yes, 70 percent,” said Dr. Dimitris Papadimitriadis, an Athens-based psychiatrist. “So, you can see there is a lot of frustration here and worry about what lies ahead.”

Effie Panoutsakapoulou, a bank worker, is fretting about what sort of future her two young sons, aged 11 and 8, are facing. She is already getting them used to the idea of emigrating when they grow up.

“I’m starting to tell them that they will eventually have to leave Greece and go somewhere else to live or to study or to work. I don’t think there’s a future for them here,” she said.

The International Monetary Fund’s solution to the Greek malaise is wholesale debt-cancellation. The IMF says the country cannot hope to prosper unless a big chunk of the third of a trillion dollars its government owes is written off.

But apart from deferring some repayments, the eurozone creditors don’t want to go along with that. Germany in particular, is adamant that the single currency bloc must not become what they call a “transfer union” under which the rich member states (like Germany) are expected to ship large amounts of cash to the poorer ones (like Greece) when the poorer nations get in to difficulty.

Some Greeks believe the answer to their plight may lie closer to home and not require large dollops of German cash.

“This is a crisis of values,” said actor and theater producer Yannis Sarakatsanis. “The solution lies in our learning a new set of values.”

In 2011, Sarakatsanis co-produced a satirical stage show in Athens called “The Foundation,” which ridiculed the Greeks for lacking foresight and discipline.

He said if he were producing the show today it would be exactly the same because too many Greeks still dodge taxes, evade rules and vote for pork-barrel politicians because they think it would be dumb to do otherwise.

But Sarakatsanis said the real jerks were the many dodgers, evaders and rule breakers who drove Greece into debt and disaster.

“The day we Greeks understand that, then that will be the day the crisis ends.”

But that, he said, is unlikely to be next Monday, Aug. 20, Bailout Exit Day.

What teachers in Greece think about the latest bailout