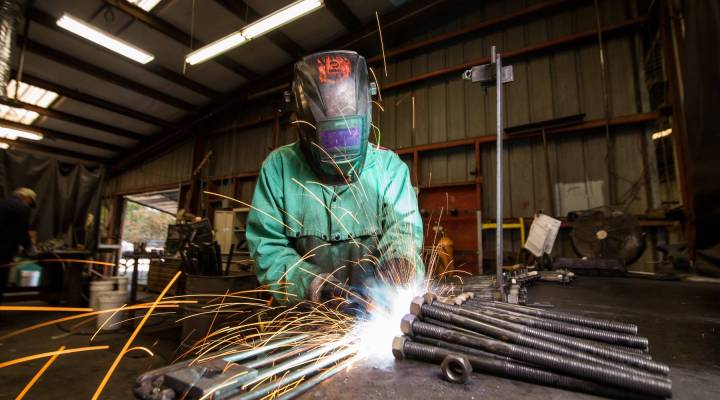 At a body shop in Atlanta, Leigh Anne Hatfield just finished taking apart the front of an SUV.

“This is a brand new Toyota Highlander. Got smacked in the front,” she said. Hatfield  said she loves her job here at the body shop. It’s her first job since she become a certified welder. A few month ago she was so poor, she had to apply for the Supplemental Nutrition Assistance Program, also known as SNAP or food stamps.

“I went to the Department of Family and Children’s Services and there was a wonderful lady there named Miss White and she sent me to Goodwill for their training program and I decided to get in to the welding program because it’s really good money actually,” Hatfield said.

Georgia’s SNAP program uses federal dollars to pay for half of the cost of job training at Goodwill Industries for SNAP recipients. When Hatfield entered a 13-week welding class, she had only held  low-wage service jobs, off and on. Goodwill offers training in 16 occupations and it costs between $4,000 and $6,000 to train someone like Hatfield. That’s money well spent, said Keith Parker, the CEO of Goodwill of North Georgia, because low-income people often earn higher wages once they acquire a skill.

“If we can help that person dramatically improve their financial situation, that’s a win for for us, the individual, the state, the federal government, all the above,” he said.

The SNAP work program started in Georgia two years ago with a pilot in three counties and so far 8,000 food stamp recipients have gone through it. The state is now expanding it statewide and wants to re-brand what it means to have a work requirement with food stamps.

“A work requirement doesn’t have to be something that’s punitive and that discontinues your food stamps. It could be something that actually connects you to a career,” said Tatrina Young, who runs Georgia’s SNAP works program.

State agencies that work with low-income people are closely watching the debate in Congress over the possible expansion of work requirements for SNAP recipients. In most states only adults who have no children have to work or get training, but Congress could add people with kids over 6-years-old to the roll.

Work is the best way out of poverty, but even in a super strong economy, it’s not that simple, said Russ Sykes with the American Public Human Services Association, which advocates for state agencies that work with SNAP recipients.

“Let’s be honest, in a lot of our programs we have people who don’t have as much labor market experience and yes jobs are going begging and there’s no doubt about that. But skilling people up among our population quite often will take more time and money,” he said.

Congress is looking to add $1 billion for training if lawmakers decide to expand work requirement for 3 million more people. That works out to about $330 per person, not nearly enough, under a program like Georgia’s, to get someone like Leigh Anne Hatfield into a welding job.