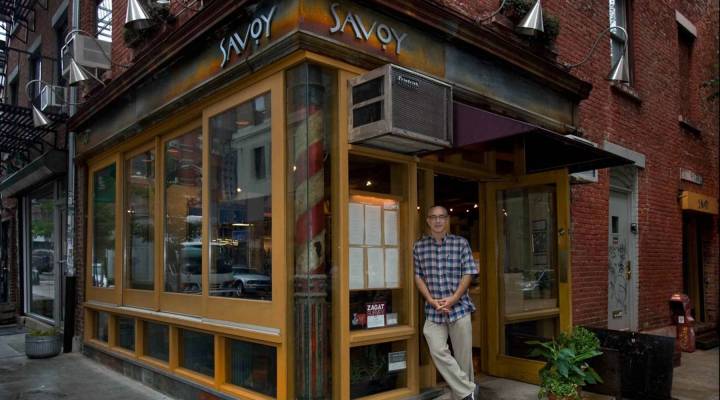 In fall of 2008, I was working in a restaurant in lower Manhattan while trying to learn how to be a radio producer. The restaurant was called Savoy, and it was a nice, comfortable place – lots of wood, fireplaces on both floors; we actually cooked things in those fireplaces — it kind of felt like a big family dining room, and the kitchen felt like it extended into the restaurant.

And generally, it had the bustle that went with a big family gathering — people would talk about ramps (sort of an oniony-type vegetable that’s still foraged, not cultivated), learn how to eat an oyster, and appreciate mushrooms that were grown at the base of pine trees. It was fun and relaxed, not fussy, with an emphasis on respecting food, and respecting the work that went into creating it.

But the weekend after the Lehman Brothers collapse, the actual volume in the restaurant dropped. People looked worried, ate fast, and didn’t talk much. It was one of the first times I saw something that I’d read about in the national news translating down to street level.

I wasn’t the only one who noticed the change. Peter Hoffman, the chef and founder of the restaurant, noticed it, too.

In the 26 years that Savoy (and a sister restaurant, Back Forty) operated in New York, Hoffman saw the changes in the world play out in the restaurant.

“We see that all the time now, that the global and political reverberations affect everybody’s mood in New York City,” Hoffman said. “And that mood translates into: Am I in the mood for having a party? Or am I living with a piece of anxiety, and how close to the surface is that?”

The financial crisis wasn’t the first time that world events affected how the restaurant operated. When the attacks of September 11th took place, Savoy was in the quarantine zone, lots of flights were grounded, and Hoffman realized that despite being focused on local ingredients, he was still dependent on the global food supply.

“I think we felt that we were the driver of our fate,” Hoffman said. “9/11 was a huge awakening for me that that wasn’t the case at all. It changed my whole view on being in business, and the extent to which I was willing to be a risk taker.”

And Hoffman IS a risk taker. He started Savoy in 1990, back when the idea of making local ramps the highlight of a dish was a novel one. He would visit the city’s biggest farmer’s market, in Union Square, and build meals based on the ingredients he found there. That made him something of a trailblazer in the organic, local food movement, at a time when the term “farm-to-table” didn’t really exist.

A look inside Savoy.

Hoffman said that in order to be successful as an entrepreneur, you need to be willing to embrace risk.  “You need to commit to an idea that you’re going to bring forth into the world. And I had that. But come 9/11, I was like – oh my god.  The balance is extremely tenuous.”

By the time the financial crisis took place, Hoffman wasn’t just an entrepreneur — he was a small business owner. “At that point, the restaurant has been open for 17 years, and there are a lot of people whose livelihoods are intertwined with the restaurant. So, it’s not just about paying the rent and my responsibilities to the landlord, but my responsibilities to 30 or 40 people.”

Those responsibilities made Hoffman want to tend to the businesses he had opened, and not branch out into other ventures. He had other ideas: He thought about opening a butcher shop or starting a farm, and linking them to restaurants, to give customers a better idea of where their food was coming from. But he was concerned about taking on more debt.

“Yeah, those are regrets,” Hoffman said.  “People who were a little younger than me have butcher shops associated with their businesses, or upstate farms that feed into them. So, the idea was great, and I wasn’t quite bold enough to bring it forth.”

Hoffman kept both Savoy and Back Forty going through the financial crisis. He has since closed both, and is now catering, consulting, and working on a book.

“The other side is,” Hoffman said, “there may be regrets, but there’s also the work towards coming to accept that — this is enough. And it ties into the financial crisis, because the reason we had that problem is that people weren’t comfortable saying: ‘this is enough.’ So, I may not have an empire. But I know what’s enough.”

Click the above audio player to hear the full interview between Marketplace Morning Report host David Brancaccio and Peter Hoffman.