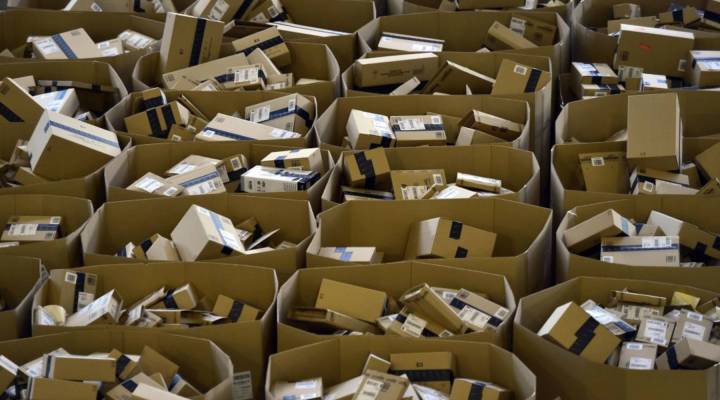 COPY
Packages are stored at the Amazon's logistics center in San Fernando de Henares, near Madrid, on the eve of 'Black Friday', on Nov. 24, 2016. Gerard Julien/AFP/Getty Images

Packages are stored at the Amazon's logistics center in San Fernando de Henares, near Madrid, on the eve of 'Black Friday', on Nov. 24, 2016. Gerard Julien/AFP/Getty Images
Listen Now

In the gig economy, it seems like no task is specialized. Regular people can do pretty much anything as long as they can download an app and pass a background check. That’s how easy it is to deliver packages with Amazon Flex, the e-commerce giant’s ever-expanding delivery program where you can pick up packages at a warehouse somewhere and deliver them right out of your car. While it may be easy to get hired, the work itself is a bit trickier. The Atlantic’s Alana Semuels decided to give it a try, and ended up finding out a lot about what the gig economy runs on. Marketplace host Kai Ryssdal talked with her about what went down on her first day on the job. The following is an edited transcript of their conversation.

Kai Ryssdal: Did it seem like a good idea, right out the gate, to do this? Because loading a bunch of packages in the trunk of your car … I don’t know.

Alana Semuels: I actually thought it wouldn’t be that bad. I live in San Francisco and I imagined going to some suburbs, listening to an audio book … just being a little chill while I deliver packages. Figured it’d be a good way to get out of the office for a day and it actually ended up being a lot harder than I thought it was going to be.

Ryssdal: Yeah, well, so describe to me day one, would you?

Semuels: Well so you drive into the warehouse and they give you this yellow vest to put on. And I started loading the packages into my car and I kind of paused because the first group of them were on Market Street, which is kind of the main thoroughfare of downtown San Francisco. And I thought … okay, this is not going to be a nice drive through the suburbs.

Ryssdal: Yeah, there are many anecdotes in this piece, which I encourage folks to read. I want you to tell me about the parking enforcement guy.

Semuels: So I came out of this building and saw this guy about to write me a ticket. And I said, you know, I’m delivering packages for Amazon, is there anywhere I can park? And he said, “see this red meter? You can’t park here. See that yellow meter across the street? You can’t park there. See that white meter? You can’t park there.” And so I said, “where can I park?” and he said, “you can park in a garage, basically.” And I convinced him not to give me a ticket, but he said, you know, parking enforcement people are constantly circling the blocks downtown San Francisco, and “I’m leaving. .. I’m not going to give you a ticket but someone could pull up in two minutes and give you another ticket.” You know, the guys at the Flex warehouse told me that a lot of people just do get tickets. But there really is no solution as Flex has expanded, a lot of cities haven’t really responded to make it easier for drivers driving out of their own cars.

Ryssdal: Let me ask you this, though: if you had gotten — it would have been a $110 ticket, right?

Ryssdal: Would you be making enough money to pay a $110 ticket and still have enough to, like, buy lunch?

Semuels: No. I mean that would have wiped out all of my earnings. As it was, I made less than the minimum wage in San Francisco. You know, a lot of expenses come up that you don’t think about when you sign up to drive for Flex. And that’s, for a lot of people, one of the biggest problems.

Ryssdal: Well, you know, it’s really interesting because you quote, I guess it’s an economist in this piece, as saying “the driving that people used to do to go to a store and take something off a shelf and drive home, we’re turning that into jobs.”

Semuels: Yeah, that’s right, and I think we’re going to do that even more in the future, you know, there are certain things that the tech economy makes really convenient. You know, I love ordering things online because that means I don’t have to go to a store. But you just have to think about the things that are good for the consumer aren’t always good for the worker. And I think that’s going to be a really big divide in the tech economy in the coming years, and something that workers and these tech companies should really be thinking about.

Ryssdal: Which gets me to this: tell me who you were delivering these packages to?

Semuels: Well, some of them were big tech firms. And that’s really when this started to bother me. I went into these offices, and, you know, if you go to a lot of these tech offices, they get free food and free coffee. They have these fancy coffee bars and these people were walking around with their free lattes talking about their weekend plans and it just felt like these people were really winning in the tech economy and the people that were delivering packages were really losing. And it just seemed like as the tech economy grows, it should be helping everyone do better. 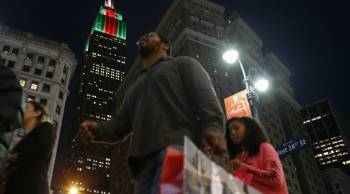