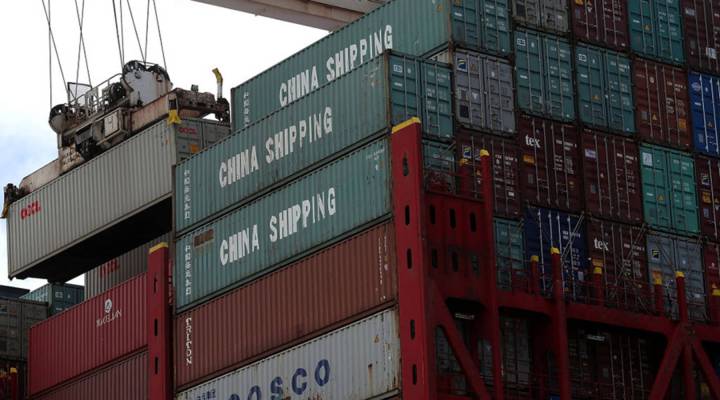 COPY
A shipping container is offloaded from the Hong Kong based CSCL East China Sea container ship at the Port of Oakland on June 20, 2018 in Oakland, California.  Justin Sullivan/Getty Images
Trade showdown

A shipping container is offloaded from the Hong Kong based CSCL East China Sea container ship at the Port of Oakland on June 20, 2018 in Oakland, California.  Justin Sullivan/Getty Images
Listen Now

On July 6, the U.S. is due to impose tariffs on $34 billion worth of goods from China. When he announced the tariffs last month, President Donald Trump said they would prevent “further unfair transfers of American technology and intellectual property to China, which will protect American jobs.” But some doubt that the tariffs will be a jobs booster in the U.S.

Chibitronics is one of the American firms that could be hit by the moves. The tech education startup with a warehouse in New Jersey makes videos and educational tools to help children learn about robotics. Right now, the company is waiting for a consignment of children’s learning kits from China, expected to turn up in mid-July. But by then, those goods – categorized as electronic parts – will be subject to tariffs, along with water pumps, industrial robots and electric cars.

He says the products are now going to see a 25 percent cost increase and he might have to pass that on to the schools that buy the products. Another option would be cutting pay for his staff.

Huang says American tariffs on electronic parts make it harder for small tech manufacturers to produce in the U.S.: “Every maker who wants to build any electronics is going to need a soldering iron. That just got 25 percent more expensive. Your typical battery that you’d need to power your project, all of the little tiny piece parts on the circuit board, like the resisters and capacitors, got more expensive.”

Bonnie Huang, the co-founder of Chibitronics.

The Trump administration has also threatened further measures against another $16 billion worth of Chinese goods to be introduced at a later stage. The administration is taking public comments on that second list of products right now. Microchips and plastics for 3-D printers could be among the affected items.

What U.S. officials haven’t put on either list so far, are finished goods from China like TVs and cell phones, something that Bunnie Huang finds bewildering: “They’ve essentially saddled ‘Made in America’ with 25 percent tariffs whereas stuff made in China has no tariffs. It’s really ironic. It seems to be the opposite of what they’re trying to achieve.”

This second list of tariffs is meant to target China’s push to gain dominance in high-tech manufacturing, under a plan called Made in China 2025. Chinese economist Hu Xingdou in Beijing says the way the tariffs are being applied won’t achieve that. He adds, “very few of the products that benefit from this policy will be exported to the U.S. China mainly sends low-end products to the U.S. or assembled products such as Apple’s iPhone.”

The Trump administration says the tariffs are about protecting American innovation and jobs. But Bunnie Huang, who also advises other start-ups, says the best way to protect American intellectual property or IP, is to assemble the products that use that IP in the U.S.

“The most critical IP is often added late in the stages of the firmware or the final assemblies, sort of how all the bits and pieces come together to form the magic thing that they’re doing,” Huang said. “If they do that final assembly, the last screw operation in the United States, they actually get really, really strong intellectual property protection because it’s all done in the United States and never leaves the shore.”

Because the U.S. tariffs target electronic components, Huang says smaller tech firms that have been buying parts from China and producing in America will have to choose between incurring increased costs or producing their goods in a cheaper country and risk losing their intellectual property.

He bets that firms will choose to stay competitive and manufacture abroad – perhaps, even in China.

“The tariffs do absolutely nothing to try and prevent the forced technology transfer. In fact, the tariffs enhance the flight of technology out of the United States,” Huang said.