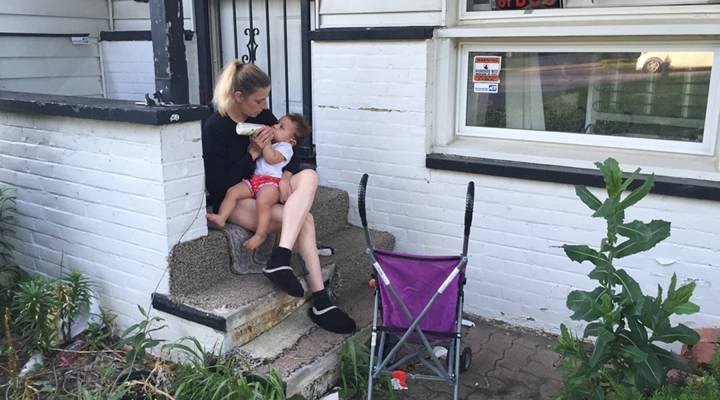 COPY
The house Maureen Seymour has been trying to buy could be condemned by the city and demolished, along with her $25,000 investment. Amy Scott/Marketplace
Divided Decade

The house Maureen Seymour has been trying to buy could be condemned by the city and demolished, along with her $25,000 investment. Amy Scott/Marketplace
Listen Now

Maria Torres needed a place to live — fast. She had been renting a house in South Euclid, Ohio, with her husband and three kids, when she was told the house was in foreclosure. They had just a few weeks to get out. “So we’re calling, going back and forth, like ‘please help us understand what’s going on here?’” she said. They had kids. It was the middle of the school year. “It was just a big disaster.”

Then, in the middle of all that, Torres noticed a sign in front of a house nearby. It said, “rent to own.” She called the number and quickly qualified. “We could stay in the same neighborhood and just get out of there, and that’s what we did,” she said. “We literally walked all our stuff over here and that was it.”

The house is a three-bedroom 1920s brick colonial. When Torres’ family moved in last year, it had some broken windows and the paint was peeling, but it had possibility. The lease came with an option to buy the house for $45,000. After a $1,250 move-in fee, they’ve been paying just over $400 a month in rent – much less than the going rate in their middle-class neighborhood outside Cleveland. Nearly half the rent goes toward a down payment.

Maria Torres stands in front of the house she’s working to buy in South Euclid, Ohio.

But there’s a catch: Torres and her husband are on the hook for repairs.

“It was kind of an act of desperation,” she said. “We knew that there were some things that needed to be done, but we’d rather do some work than be homeless.”

Torres is among thousands of people around the country still caught up in the aftermath of the foreclosure crisis. In South Euclid, 20 percent of homes ended up in foreclosure. Investors swooped in to buy many of them on the cheap — often sight unseen — with the intent of flipping them. But as credit dried up, those homes became harder to sell. “So people were looking for alternatives,” said Sally Martin, housing director for the city of South Euclid. Alternatives that create income for investors and, she said, illegally saddle would-be buyers with the responsibility for thousands of dollars in taxes and repairs.

In Torres’ case, “some things that needed to be done” turned out to include 112 code violations, ranging from cracks in the driveway, to dangerous wiring. Since they moved in in early 2017, she and her husband have repaired the basement walls, installed railings in the attic, replaced the shower in the bathroom, fixed the flooring in the kids’ rooms and much more. About $12,000 later, there is still a long way to go. Both of them have good jobs: She sells insurance; he works for a bank, but a history of poor credit and bankruptcy ruled them out for a traditional mortgage. So even with all the work, they were feeling pretty good about their decision. “You start to see a lot of potential and it just made us proud that we accomplished it,” she said.

An excerpt from the lease agreement signed by Maria Torres: “Lessee accepts Premises ‘as-is’, and agrees that no verbal promises have been made which do not appear in writing. Lessee specifically acknowledges that the property, the subject of this Agreement, may have been acquired by Owner from a foreclosing entity, and that Owner has never taken possession of, inspected the property or caused the property to be inspected. Lessee understands that the property may have defects, visible or hidden and that Owner shall not be liable or responsible for any such defects.”

Then she got a phone call. “‘Okay, here comes the carpet rip from under our feet,’” Torres recalled thinking. The call was from Sally Martin, whose job is to enforce the city’s housing code. That often puts her in the business of delivering bad news. After they talked, Torres found out she owed $3,000 in property taxes. According to her lease, she’s responsible for those, too. “If you don’t pay the taxes can they put you out, because that was part of your obligation?” Martin wondered aloud, standing with Torres in her driveway on a recent morning. “And you’d lose your $12,000, and you’d lose all that you paid.”

“I’m in no position to pay that amount of money upfront,” Torres said.

It’s the rare rent-to-own deal that actually works out, said Sarah Mancini, an attorney with the National Consumer Law Center. “If they miss a single payment they can lose everything and be evicted like a tenant,” she said. “So they’re really not building up any equity in the home. They don’t have any right to protections in the form of a foreclosure process.”

Many rent-to-own and other “seller-financed” housing schemes target low-income people of color, who can’t access traditional credit, Mancini said. “It’s partly based on the history of racial, residential segregation across the country,” she said. “You had this pattern of disinvestment and redlining, where banks did not equally make credit available in communities of color.” Then came subprime lending and the foreclosure crisis, “and now we see this resurgence in these really predatory transactions that are, again, being targeted at these same communities of color.”

In most states, Mancini said, contracts like the one Torres signed are illegal, because landlords are responsible for keeping a property “habitable,” which means it’s on them to fix any code violations. “The law is very explicit,” Martin said. “I think the question is who’s going to prosecute it, and how easy is it going to be to prosecute when many of the parties are not local?”

In South Euclid, Martin has taken it upon herself to investigate. In 2008, she was brought in as the city’s first housing director, to manage the foreclosure crisis and make sure this middle-class community — with its good schools and low crime rate — didn’t sink into a sea of abandoned homes and blight. She and her team have made progress. Houses have been condemned and torn down, vacant lots have been turn into parks and property values have risen more than 50 percent in the last six years.

Sally Martin is housing director for the city of South Euclid, where she was brought in to help contain the foreclosure crisis.

But a decade later, Martin is still trying to dig out from the crisis she was brought on to contain. And that means tracking down some hard-to-find investors.

Maria Torres’s landlord, originally, was Odell Roy LLC, a company owned by real estate investor James Odell Barnes, based in South Carolina. Over the years he’s bought thousands of bank-owned properties, earning him the nickname “foreclosure king” in news stories. Two years ago, his company paid just $14,000 for Torres’s house in South Euclid, then, earlier this year flipped it another company, PCM Real Estate, for almost $85,000. Torres sends her rent to a third company, Red Dot House Management. None of these companies would make someone available for an interview.

Sometimes just tracking owners down puts Martin in a tricky spot. She’s responsible for making sure the city’s houses are up to code, but she also knows going after the landlord could get Torres and her three kids evicted. “We find in code enforcement we really do become social workers, most of the time,” she said. “It just becomes a job full of a lot of human drama.” Because these risky rent-to-own deals often aren’t recorded, it’s impossible to know just how many are out there. In South Euclid, Martin estimated there may be between 10 and 20 current contracts in a city of about 9,600 houses. “Unfortunately, the outcomes are usually terrible,” she said.

Armed with a stack of fat manila folders, she drove me by house after house to see what “terrible” looks like. One where the county had foreclosed for $63,000 in unpaid taxes and the family was going to be evicted. Another needed such extensive repairs the renter just walked away.

We stopped in front of a small white house on a quiet street, with weeds coming up through the walkway and a stroller parked out front. From outside, you could see a refrigerator blocking one of the living room windows. We found out later that’s because most of the outlets don’t work. The home was another foreclosure, bought in 2011 for just under $15,000. It’s supposed to be vacant, Martin said. Inspectors discovered more than 40 code violations — some of them life-threatening electrical problems — and a woman living inside with several children, under a land installment contract. Similar to a rent-to-own deal, under a land contract the would-be buyer pays monthly installments to the seller, plus interest, until the house is paid off in full. This time Martin found the seller, an out-of-town investor who declined to be interviewed. The city has taken him to court.

“He’s not willing to make the repairs,” Martin said. “My guess is that he’s going to end up evicting her.”

The woman facing eviction is Maureen Seymour, who answered the door holding her baby granddaughter. She’d found the place on Craigslist. She doesn’t make much money as a restaurant server, and her credit was shot. So $660 a month toward home ownership seemed like a good deal. Now she’s facing at least $30,000 worth of repairs, and more than $8,000 in unpaid property taxes.

“I think I’m just going to work on them a little bit at a time and look for somewhere else to live,” she said.

That would mean walking away from the $25,000 she estimated she’s paid so far, almost half the purchase price of $55,000. If the seller refuses to fix it, the house will be condemned and demolished, along with Seymour’s investment.

“It’s absolutely tragic,” Martin said. “These types of arrangements tend to victimize people who feel that they don’t have any other choice.”