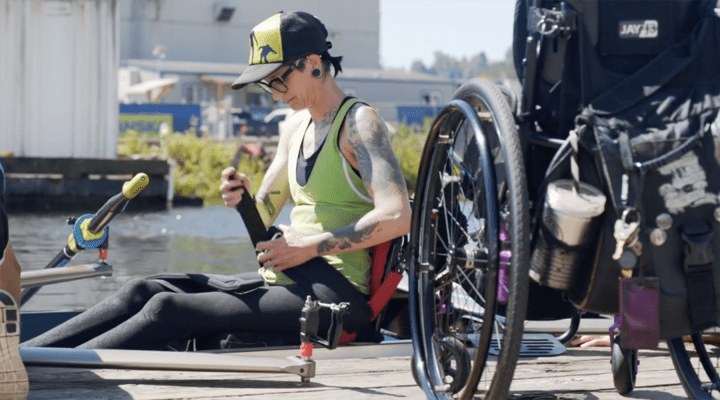 COPY
[Image description: A rower from Seize the Oar is setting up to practice on Lake Washington in Renton, Washington. She is wearing black tights and a lime green top. She is wearing dark rimmed glasses, and her hair is in a ponytail, tucked inside of the green and black baseball cap. She has multiple tattoos across both of her arms and has small gauges in her ears. She is slightly smiling as she puts on the boat’s safety straps.] Courtesy of Teal Sherer/Seize the Oar
Economics of Disability

[Image description: A rower from Seize the Oar is setting up to practice on Lake Washington in Renton, Washington. She is wearing black tights and a lime green top. She is wearing dark rimmed glasses, and her hair is in a ponytail, tucked inside of the green and black baseball cap. She has multiple tattoos across both of her arms and has small gauges in her ears. She is slightly smiling as she puts on the boat’s safety straps.] Courtesy of Teal Sherer/Seize the Oar
Listen Now

Teal Sherer is a fitness junkie. Sherer, an actor and writer, has been tapped into inclusive fitness since college. But Sherer says that finding a place in the fitness and wellness community wasn’t always easy for her.

She was injured in a car accident and paralyzed from the hips down at 14. In her Tennessee suburb, adaptive exercise just didn’t exist. Sherer found community when she joined an inclusive dance group at her college. She met her husband in California while learning to surf with a program called Life Rolls On.

“[Exercise] made me feel strong again and confident,” Sherer said. “I began to love my body and how it moved, and yeah, it worked a little differently for me, but that was OK.”

Now Sherer rows with the Seattle adaptive rowing team, Seize the Oar, which was founded in 2013.

The crew is made up of wheelchair users, many of whom were just looking for good exercise when they first joined. Rowing is great for people who use wheelchairs because the rotation of their arms when they row is in the opposite direction of what they do when they propel themselves in their chairs. It helps balance things out.

The team started out on rowing machines in a CrossFit gym. Eventually, coach Tara Morgan brought everyone out on the water. Sherer and her Seize the Oar crew row in two-person teams, using straps to stabilize their legs inside the boats.

Rowing pairs are made up of people who have similar fitness goals or equivalent experience and strength. Sherer rows with Megan Knoernschild, Seize the Oar’s youngest team member, a 19-year-old who goes to the University of Washington. They compete with Erin Martin and Amy Ruby, a very competitive pair of rowers whose team nickname is “Tiny Mighty.”

[Image Description: Three members of Seize the Oar are working out on rowing machines on a deck in front of Lake Washington in Renton, Washington. They are each mid-pull, and are facing towards a whiteboard with a workout written out. Each rower’s hair is pulled into a ponytail, with the one on the farthest right also wearing a crimson and gray baseball cap.  Each of their wheelchairs are close to where they are sitting. Beyond the water in the background are hills with both Evergreen trees and homes filling out the skyline, and a city can be seen farther back. The sky is bright blue, partially filled with clouds]

Sherer and the rest of the team have been spending weekend mornings at Renton Rowing Center on Lake Washington, where baby ducks join them. They can see planes being built at the Boeing Factory next door.

They’re preparing for competition, but for now, even practice is pretty great.