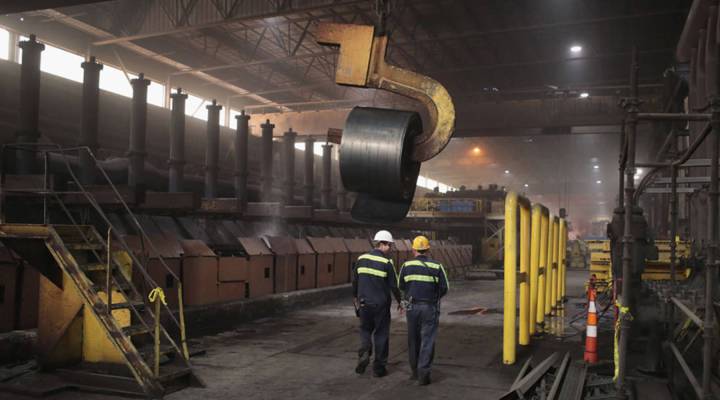 COPY
Workers remove a coil from the production line for quality-control testing during steel production at the NLMK Indiana steel mill in March in Portage, Indiana. Scott Olson/Getty Images

Workers remove a coil from the production line for quality-control testing during steel production at the NLMK Indiana steel mill in March in Portage, Indiana. Scott Olson/Getty Images
Listen Now

The Group of Seven leading industrialized nations will meet in Quebec, Canada, this week for the annual G-7 summit. Given all the points of trade unrest between the United States and Canada, that might make it a tad awkward for Canadian Prime Minister Justin Trudeau and President Donald Trump. Last week, Canada retaliated against the United State’s steel and aluminum tariffs by announcing metal tariffs of its own. Marketplace host Kai Ryssdal talked with Paul McGrath, president of JEM Strapping Systems in Ontario, Canada, for some perspective on how the U.S.-Canadian trade dispute will impact companies there.

Kai Ryssdal: Tell me what JEM strapping does, would you sir?

Paul McGrath: Well, what we do is we take cold roll steel, we slit it, we edge roll it, we paint it, we wax it, we oscillate it into 100-pound coils or jumbo coils. And then we sell it to industry. We sell it to U.S. industry, we sell it to Canadian industry. Half of my purchases are Canadian steel and the other half is U.S. Steel.

Ryssdal: Tell me what your thoughts are, sir, about this whole trade discussion, I guess, is what the White House likes to call it.

McGrath: (Laughs) Well, I see it as a big loss for Americans, because American steel mills, their biggest customer for exports is Canada. And in Canada, the United States is basically shut themselves off from steel from anywhere in the world, pretty much. The United States is not self-sufficient in steel and actually needs Canadian steel for American manufacturers to make whatever they’re making. And they’re going to be deprived of enough steel to make what they need to make. I see it as a huge lose-lose for Canada, I see it as a huge lose for the United States and Mexico. We should all be working together.

Ryssdal: You’ve got a U.S. division, right, with a certain number of people working down here? What’s going to happen to them, do you think?

McGrath: Good question. Probably going to put American people out of work. Can’t supply them. How am I gonna supply them? I can’t bring U.S. steel into Canada without getting hit with 25 percent and I can’t send Canadians steel to the U.S. without getting hit with 25 percent. So it means unemployment for some nice-paying jobs in the United States.

Ryssdal: What’s the long run on this one, Mr. McGrath? After this blows over with whatever end result happens, what’s the long-term impact?

McGrath: Long-term impact is Canada and United States have had a very special relationship. Americans are very concerned about security. We are your northern security. We’re part of NORAD and we’re part of the U.S. military complex. We’re your best partners and friends. But you don’t take your best friend and poke them in the eyes and hit them over the head and then hug them up and say, “Hey, you support us.” It’s basically destroying the relationship with your most important allies.

Ryssdal: So when you get down to the coffee shop, sir, and have a cup of coffee in the morning or you’re at the supermarket in the afternoon or whatever, what’s the conversation about these tariffs?

McGrath: Well, the Canadian feelings are betrayal, insult. I talk to a lot of Canadians through all the provinces, and I talk to a lot of Americans. And a lot of Americans don’t understand why they’re doing this to Canada. I understand why you want to do it to China. China has been very guilty of dumping steel into Canada and in the U.S. and so forth. But Canada is not China. I don’t know.