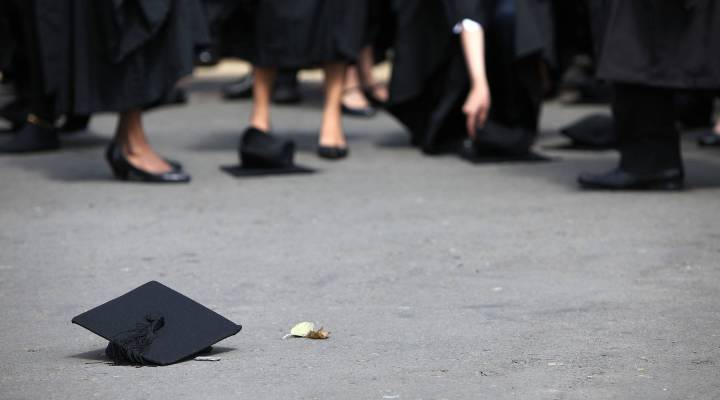 College students who graduate into a recession fall into a deep job market hole. That’s clear from the economic  literature, and its also clear from the words of 2008 graduates from the University of Central Arkansas.

“I’ve always been told that if I went to college I would graduate and have a good job and be comfortable, and that wasn’t true at the time,” said Lena Harrison, an art history major. “I remember that being kind of a kick in the teeth. That one hurt.”

“I don’t know that I was aware how your first job salary was going to work,” said Paul Kroger, who double majored in communications and film studies. “Coming into a job, if it’s 30, 40 maybe 50 percent less than what some people are saying they expect, that can be an ego blow.”

Paul Kroger at his company Granite Transformations in Central Arkansas.

“We all felt a little bit like we were lied to,” said psychology major Candice Hoke Kennedy. “You graduate college and you go do these amazing things, and everything turns out great – and we found out pretty quickly that it wasn’t like that.”

Studies suggest recession graduates tend to fall behind their non-recession  peers  in terms of salary, and don’t catch up for 10 to 20 years. But there is evidence for two ways to catch up more quickly and make up the gap.

One: move around early in your career.

Philip Oreopoulos, an economics professor at the University of Toronto, remembers advising grim-faced undergraduates in the dark days of 2008. He told them: “Stay flexible, and be willing to consider other types of jobs or industries you may not have thought of previously. This catch-up process can take three, four, five years.”

Paul Kroger moved around after realizing in college that the film industry wasn’t for him. He wanted a 9-to-5 job. So Kroger started his career at a telecom company, and proceeded to move five times in six years.

“We were in Little Rock twice, we were in Charlotte, North Carolina once, we were in Des Moines, Iowa, and we were in Cedar Rapids,” Kroger said. “Kind of second-tier cities. It wasn’t a whole lot of flash, but there were really good professional development opportunities.”

Kroger and his wife ate a lot of peanut butter, he said. As he moved around, his income and responsibilities grew in the firm. Then, in 2013, five years after graduation, he decided to go out on his own and started up a kitchen remodeling franchise in Little Rock.

“In my head I’ve always had an entrepreneurial desire,” Kroger said.

“The people that I’ve met in my life who are successful never really rest,” he said. “They never really sit back. They’re always looking for the next opportunity.”

Conversely, young college graduates who stay in their first jobs, don’t move around and let inertia set in tend to remain in underpaying jobs. They move up more slowly.

Strategy two for digging out of a soft job market: sit it out, and go back to school.

“Upgrading one’s skills might be a good idea,” Oreopoulos said, “and a way to press pause and avoid having to enter the labor market in worse conditions.”

That’s the story of University of Central Arkansas 2008 graduate Lena Harrison. After getting a degree in art history, she could not find a paying job in her field, or a masters program in art history that would take her. So Harrison studied for a masters in something else: teaching high school.

“I hated it. It was just miserable,” Harrison said. “High schoolers are kind of intimidating people.”

Back to school she went, for two more years to be an elementary teacher – a job she loves — in Fayetteville, Arkansas.

It wasn’t easy. Harrison and her husband each worked three jobs to get themselves through college and graduate school. In the end, she said moving around and returning to school made her more resilient for the future. She said she always has a Plan B for her career — and C, D, E and F.

“I always keep about five different plans for my future in mind,” Harrison said, “and kind of simultaneously try to work towards all of them, just in case one of them exists and the other does not.”

For Candice Hoke Kennedy, who is now studying for a psychology Ph.D. in Oregon, putting herself through graduate school in economically lean times reinforced the value of hard work, something she said she takes pride in.

“I work almost all the time that I’m not doing school work,” Hoke Kennedy said. “A lot of people say, ‘when are you going to quit your job?’ And I just go: ‘Anyone who asks me that has never been poor. You don’t know what it’s like to be so worried about when am I going to be paid again, and can I afford this box of noodles? What am I going to do so I can put gas in my car and go to my class so that I can get a better job?’”

It sounds simple. But Kroger said that from his vantage point now, as an employer, many of today’s new college graduates may not have that; they’ve only gone to the School of Soft Knocks, according to Kroger.

“’What’s the hardest thing you’ve ever done?’ I ask that in interviews, almost every time. What I hear from people I’d say under the age of 30 often times is, ‘mowing a yard, doing the dishes.’ Adversity is where skills are born.”

Kroger said another skill he learned was knowing his limits.