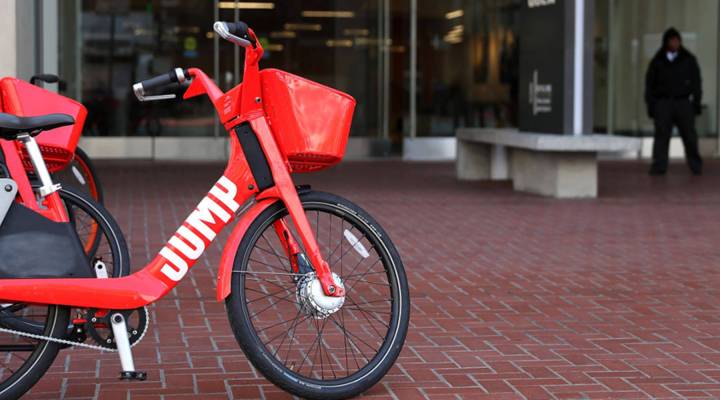 Uber is looking beyond cars in its bid to control the future of mobility. The company recently acquired electric bike share startup Jump. That means in select cities, Uber users can opt for a bike instead of a driver to help them get around. In San Francisco, Jump recently became the first stationless bike share company after winning an exclusive 18-month permit with the city. But the uptick in two-wheeled transportation sharing has some worried about pedestrian safety on sidewalks, not to mention the implications surrounding data privacy. Marketplace Tech host Molly Wood met up with Jump CEO Ryan Rzepecki on a busy street in San Francisco to get a handle on the ride share ecosystem. The following is an edited transcript of their conversation.

Ryan Rzepecki: I feel like we’re at the birth of a new industry, which is really exciting. You see a ton of investment from a lot of different players right now investing in electric bikes and electric scooters and really shifting away from large, heavy, expensive automobiles. There’s going to be some growing pains where people are used to having cars on the street, but they’re not used to seeing all these new vehicle types around. So, there’s a bit of a learning curve, but there’s a huge opportunity to change how people travel in cities.

Molly Wood: How can you help with that learning curve? Because we see people riding around without helmets or on the sidewalk instead of the street, which I think is where you’re supposed to have your bike.

Rzepecki: There’s definitely some education for the users. The bigger threat to both bicyclists and pedestrians is cars, though. A lot of cities now are working on Vision Zero, which is reducing car crash fatalities with a goal of eventually having zero. Generally, when you shift people to bikes, it’s a safer mode for everybody.

Wood: Although this is also a bike with a bit of an electric boost.

Rzepecki: It is, but the top speed is 20 mph, which is comparable to what you could do if you’re really exerting yourself on a regular bike. And I noticed that most novice users just kind of putt along around 10 to 15 mph.

Wood: So tell us about the relationship with Uber. You started out in a partnership and now Uber has acquired Jump, is that right?

Rzepecki: Yeah, that’s correct. So I think Uber saw that some of their existing customers were taking the bikes rather than cars for some of these trips. Our average trip length is 2.6 miles, which is actually very similar to trip lengths for Uber in cities. And it made sense to put the two pieces together.

Wood: Well, it’s interesting, because one of the concerns about Uber and Lyft is that they’ve added a lot of cars to the road. Do you think that they saw you first as competition and then complementary?

Rzepecki: I think that there’s a big opportunity here where one of the primary criticisms is this congestion claim. I think that the overall societal benefit of having ride share is a net reduction of automobile usage, but that is one of the criticisms. And there is this opportunity to shift people out of those car trips and onto bikes very directly. Where if you’re in the app you can see, OK, this is how much it’s going to cost and how long it’s going to take in a car. And this is what it’s going to cost and how long it’s going to take on a bike. So I think there’s a direct impact there. There’s an understanding that there may be some amount of trips that are shifted from the cars to the bikes, but Uber has been really good over the years about disrupting itself.

Wood: And then talk to me about data. My understanding is that part of that deal with the city was that you would provide real-time GPS location information. Now obviously, that is a part of Uber’s app already, location collection. How much data are you collecting?

Rzepecki: Yes, so we really believe in sharing that data with cities to improve bike infrastructure, so they can see where bikes are traveling and hopefully build out more bike lanes. We have to be mindful of user’s privacy and so that we’re sharing the data in a way that’s anonymized. But yeah, we have had a historical policy of being very open to cities with the data. And Uber has been supportive of that approach.

Wood: How are you communicating that to users?

Wood: I mean, is it clear to users? If I open the app, am I going to see something that says, “Hey, listen, there’s a GPS on this bike … I know this is something you’re all worried about right now?”

Rzepecki: I think there’s always been a bit more acceptance because people realize that this is a bike that we’re tracking. This is our asset that we’re tracking and that they are riding, which is different than tracking something that they own. The fact is that many apps and services or telecom providers have this type of data already. The fact that it’s tracking our vehicle, generally more people have been accepting of that.