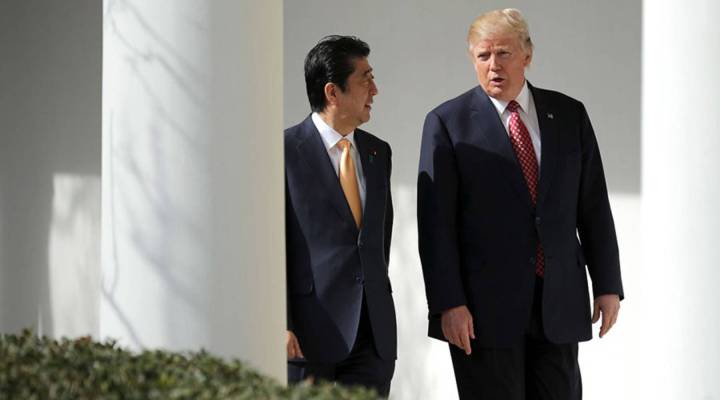 There’s arguably no foreign leader who’s tried harder to get into President Donald Trump’s good economic graces than Japanese Prime Minister Shinzo Abe. He was the first foreign leader to visit him after his election, and they’ve bonded over golf games. But all the photo ops and visits to Mar-a-Lago haven’t done him any good. Japanese steel and aluminum exporters are among the relative few to have the president’s tariffs levied on them. So what gives? Marketplace host Kai Ryssdal talked with Shihoko Goto, who’s a senior Northeast Asia associate with the Woodrow Wilson Center’s Asia program, about what’s going on in the U.S.-Japanese economic relationship. The following is an edited transcript of their conversation.

Kai Ryssdal: Before we get into the nuts and bolts, do me a favor and give me an overview of the U.S.-Japanese economic relationship.

Shihoko Goto: The U.S.-Japan economic relationship isn’t what it used to be 20 years ago. Twenty years ago, it used to be that of friction. They were on the verge of or in the midst of a trade war at any given time, and there was a lot of concern about Japan really overtaking the global economy. That is certainly no longer the case. What is happening now though, the Trump administration is really focused on reducing the bilateral trade deficit. Shinzo Abe has really tried very hard to ingratiate Japan to the United States and it also wants the United States to be part of a multilateral free trade agreement.

Ryssdal: So with that in mind then, with with Prime Minister Abe wanting multilateral relationships and President Trump being emphatic about bilateral trade deals being the way he’s going to do business, where’s the opportunity for compromise?

Goto: The compromise can really be on focusing on what may unite them. The big one is China and the concern about China and its trade practices, especially in stealing intellectual property. Japan is really trying to have the current administration focus on those issues, but it’s been a really hard struggle for them. So people are looking for results, and the results just haven’t been there.

Ryssdal: And here we have then, speaking of results, the Japanese being subjected to these steel and aluminum tariffs when basically everybody else, except maybe the Chinese, are getting these exemptions.

Goto: Right. And this has been greatly disappointing to Tokyo. Abe and Trump met at Mar-a-Lago, they played golf, the expectation was that yes, Japan has a very strong, personal relationship with Trump that would translate into at least equal treatment of Japan with the European Union or Australia. But no, it’s actually been treated in the way that Russia and Turkey are.

Ryssdal: Well how much longer do you think Abe can keep going to Trump and Trump basically saying, “Yeah, talk to the hand,” and Abe going home with nothing? Right?

Goto: Prime Minister Abe currently is having a lot of trouble back home as well. He is facing a lot of discontent from the opposition on cronyism. So, he really needs to bring home some kind of tangible result. So in the case of steel, the Japanese strategy from here on out is going to be to continue to press for exemption, but also to try to get exemptions line by line, item by item on each steel and aluminium thing. The other strategy that the Japanese want is, of course, to have the United States part of multilateral agreements like the TPP, the Trans-Pacific Partnership agreement, or if failing that, at least avoid having to negotiate a bilateral trade agreement with the United States.