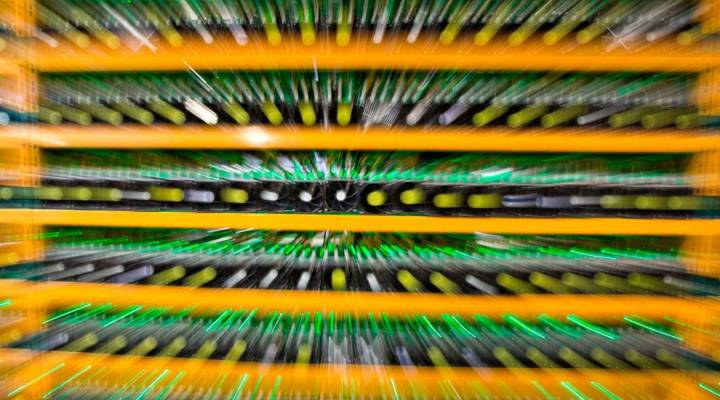 COPY
Who makes the rules for what can and can't happen on the internet gets complicated. LARS HAGBERG/AFP/Getty Images

Who makes the rules for what can and can't happen on the internet gets complicated. LARS HAGBERG/AFP/Getty Images
Listen Now

Who decides how the internet works, what can and can’t be done, and what standards are used? Laura DeNardis, a professor at American University and author of the book “The Global War for Internet Governance,” joined Marketplace Weekend host Lizzie O’Leary to break it all down. An edited version of their conversation follows.

O’Leary: So I’m going to ask you sort of a basic, but I guess complicated, question which is who governs the internet?

DeNardis: Well many people view the internet as uncontrollable or not governed, but it is already governed. Just not in the traditional sense of governmental control. It is governed through an ecosystem that involves the private sector, traditional governments and also new institutions.

O’Leary: Well and when we think about it in that way, you mentioned we’re not talking about traditional governance in a, I guess, political way, how do governments feel about that? After all, different governments have very different approaches to how they see the internet.

DeNardis: Well that’s true. There is a very essential tension right now between different visions for the internet. One envisions an internet that generally supports the free flow of information. But there is another view of the internet that is in some ways rising. And that’s what I would call “cyber sovereignty.” And you see that coming out of China with the systems of filtering and censorship that they have. You see it in Russia, you see it in Iran and it’s actually been happening for quite a while. Probably the best example of that authoritarian tendency towards the free flow of information was the 2011 Egyptian shut off of parts of the internet and cellular networks as well.

O’Leary: Well so how then when we think about kind of the internet moving forward and this kind of series of governing actors that you mentioned, how does that tension either get resolved or or does it explode in some way?

DeNardis: It’s going to explode more so than it has already. This is why I sometimes use the term global war for internet governance.

DeNardis: I stand by that provocative title because now governments recognize that control of the internet has become a proxy for political power. It’s a way to reach across borders to enact different activities that can’t be done locally. So you see this with cyber security attacks that take down governments or hack into infrastructures that are very critical, such as energy systems. Cyber is absolutely now considered the fifth domain of warfare and so we see these kinds of politically motivated attacks on various sectors, as well as governments.

O’Leary: Well so how do private companies figure into this? Because you know some of them are kind of domiciled in one country but then others operate across borders.

DeNardis: The private sector owns and operates the networks that keep everything running. They cross borders and they make decisions on their own about what information to block, what are the conditions of speech, for examples on social media platforms, what kinds of privacy we have. They’re increasingly involved in dealing with attacks such as the Russian social media influence campaign around the U.S. presidential election. So they’re absolutely at the front and center of this and governments in fact can’t really do anything on the internet without turning to these private companies.

O’Leary: I want to ask you about one specific thing, we’ve been talking about internet governance but there also seems to be, to use the war metaphor, an arms race for control of a lot of different kinds of cyber technology and, in particular, blockchain. What is happening there and why is that important?

DeNardis: Blockchain tracks and manages any kind of transaction via encryption and mathematical calculations rather than a transaction being authorized by a central authority. It takes central authorities out. One way to think about it is a distributed database that tracks a continuously growing set of records.

So we’ve heard Russia make a lot of claims to wanting to become very savvy in blockchain wanting to take the lead in blockchain. Who sets the standards for these things? Who controls these kinds of systems? The whole purpose of it is to take centralized authorities out. But it’s very important to remember that these are not black box technologies. Somebody actually designs them and somebody sets the standards for them.

O’Leary: When we think about this idea of a war for internet governance, is there a way to measure who’s winning that war?

DeNardis: Depends on who you ask. So for an authoritarian country winning the war means how do you co-opt the infrastructure of the internet in order to enact surveillance, to stop the flow of information and to enact control over citizens. In other countries, winning the war means how do we keep innovation flowing, how do we have, you know, economic success and how do you enable freedom of expression to occur.

O’Leary: We’ve been talking about, sort of, things we know but where are we going next? What are the new fights here?

DeNardis: The internet is no longer merely a communications system. It’s something that is embedded into the physical world, whether medical systems, cars or refrigerators. There is attention to using this to further intelligence gathering and to disrupt systems. So I think that we’re at a moment of opportunity now, as the technologies develop, to get out ahead of it. And I do hope there is more policy attention to this emerging area.