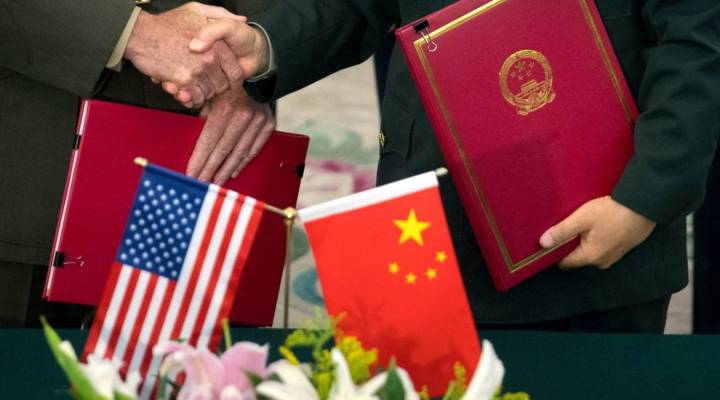 COPY
The American flag placed next to a Chinese flag. MARK SCHIEFELBEIN/AFP/Getty Images

Treasury Secretary Stephen Mnuchin and a high-level delegation from the Trump administration are heading to Beijing this week for trade negotiations on what the American business community says are unfair trade practices. Marketplace’s former China bureau chief Scott Tong talked with host Kai Ryssdal about what both sides hope to accomplish. The following is an edited transcript of their conversation.

Kai Ryssdal: So, look, what — and this is a big question, and you got like a minute to answer it — what is the Trump administration’s big issue that they’re trying to solve with this trip?

Scott Tong: The big issue is one that many administrations have tried to deal with and that is China has this policy — it’s long tried — to build national champion companies to be global winners. When I first went to China 13 years ago, it was happening then. Imagine our government owned the most important businesses in all these sectors: JPMorgan in banking, Exxon Mobil, Verizon, NBC, and the government said no to outside competition, or if you come in, you have to partner with us and hand over your technology. That’s kind of how it works. Now first of all, a lot of countries historically have done this kind of thing. In China, it’s now at another level. So under President Xi Jinping, this is woven into the party ideology of a proud China being resurgent in the world. It’s putting hundreds of billions of dollars in this, and now the Chinese companies want to win the next-generation technology arms race — 5G, autonomous cars, AI, all of these things. So for the Trump administration, this is unfair, threatens the U.S. and its allies and is threatening to fire back with the whole litany of tariffs against China.

Ryssdal: Right. And so that delegation — you know, I read the list of members, Mnuchin and [White House trade adviser Peter] Navarro and all those folks — are going over there, they say they want to negotiate. But the Chinese said today, “We’re not negotiating.” So now what?

Tong: This is not a surprise. I mean, this industrial policy, it may be a fundamentally intractable issue for the U.S. and China to deal with. This goes to the heart of how China runs its economy and how it’s run it for a long time. And to Americans who have been in China recently, what they think is, you know, the Chinese, when they say this is off limits, they might be misreading the United States. That is, the Chinese might think, you know, that that Trump administration, they want to make deals, they may just take a couple cosmetic concessions, you know, an inch in the auto sector or an inch in the banking sector or something, get a press release, everybody declares victory. But what the Chinese may not understand is how broad this frustration is in the United States.

Ryssdal: Take a detour for me into the makeup of this delegation, because it is not on a policy level necessarily cohesive.

Tong: It’s split. You have trade nationalists on one side — the trade rep, [Robert] Lighthizer, Navarro, the White House assistant on trade policy — they’re the nationalists. And then we have Larry Kudlow, the assistant for economic policy, who is much more of a free trader. And for weeks now, as this has been simmering, the big question has been what do the Americans really want? You know, do they just want a quick deal, or do they want some promises of a trade deficit that might shrink over time? It’s not clear what the U.S. wants, and it’s pretty hard to go over and negotiate if you don’t make clear what your list is.

Ryssdal: Yeah, let me just actually pick up real quick on that trade deficit part. That’s been the thing that the president has been harping on since he started running, even before. The Chinese again said, “No! That is not our issue right now.”

Tong: Well, there’s a lot of bluster going both ways. And what I learned about the Chinese side is if a foreign country is explicitly asking for something, demanding something, the Chinese are not going to give it. Right? That’s losing face. They’ll never do that. They could find a way to say, “Oh, we’re going to, you know, buy a certain amount of U.S. soybeans, we’re not going to sell you too much steel.” They could kind of put it on their terms, and in the end the deficit might come down a little bit. But we do know is, historically, the Chinese have been very good at putting on a show, giving the appearance of some kind of a deal, and the status quo remains.