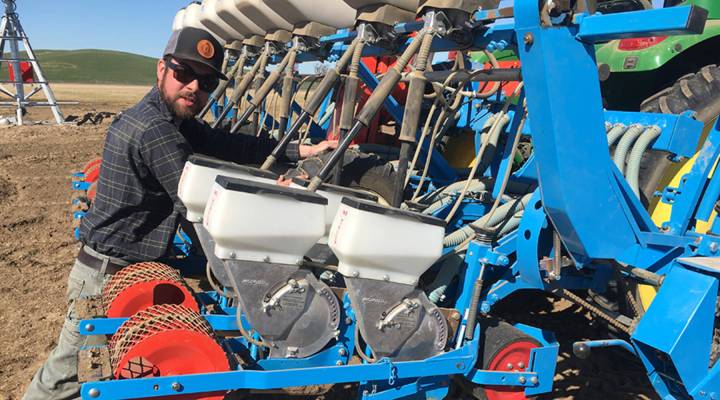 Despite documented risks to people and wildlife, a controversial pesticide has escaped regulation under the Environmental Protection Agency under the Trump administration and now may receive additional protections from Congress.

The pesticide at the center of this is called chlorpyrifos. First approved in 1965, the product has helped protect a broad range of crops against pests. But chlorpyrifos is also a neurotoxin designed to attack the nervous system and is linked in studies to low-IQ babies and dead fish. Twice in the past year, the agency had to decide whether to limit or ban the product; twice is declined. At issue is food production on one side and enhanced environmental safety on the other in official Washington.

“Cut up some fresh tomatoes, Walla Walla sweet onions and some cucumbers,” Locati said. “And put some olive oil and vinegar and salt and pepper. It’s a pretty simple salad.”

Key to growing this onion is chlorpyrifos. It kills pests like the local wire worm by attacking their central nervous systems so they can’t wreak havoc on his plants.

“As that seedling develops, they just put a hole in the crop,” Locati said. “You know, when an onion is that small, it doesn’t have a lot of root development to overcome the stress of a wire worm.” If the wire worm destroys a crop, Locati estimates that costs him up to $1,500 per acre. He uses high-end machines to spread his seeds, as well as tiny grains of the pesticide.

But other farmers spray the chemical up in the air, and wind can carry it into waterways — where Pacific salmon live. That can affect fishermen like tribal fisherman Michael McConville, who works in the Columbia River Basin. He said salmon catches have fallen in a generation.

“It’s about half, I would say, half what we fish today as we did once before,” McConville said. “The fish are smaller, they’re a lot smaller than they were once before.” Salmon struggle for many reasons: Overfishing, dams and water pollution. “Forty years ago, I actually came down to the river, and I was so thirsty in the summertime that I could drink the water and not get nothing happen to me,” McConville said. “I’m afraid to touch the water nowadays.”

Several Pacific salmon species are on the federal endangered species list. And now, chlorpyrifos and other pesticides in its class known as organophosphates are “likely to jeopardize the continued existence of 38 of the 77 listed species,” according to a new biological opinion from the federal National Marine Fisheries Service.

“We’re talking about extinction,” said marine fisheries scientist Andrew Rosenberg of the Union of Concerned Scientists, which has criticized this administration’s regulatory policy on chlorpyrifos. “Salmon are particularly vulnerable because their spawning habitat is in streams with relatively shallow water. And that’s the place where the chemicals concentrate when they run off from land.” Rosenberg expected the EPA to respond to the biological finding with new restrictions on chlorpyrifos use. Those have not materialized.

Instead, industry groups have criticized the scientific findings in the more than 3,700-page opinion on grounds that it relies too much on computer models.

“Because of the types of models they’re using, they are coming up with results that show the impact is going to be dramatically greater than we think it really is,” said Heather Hansen, executive director of Washington Friends of Farms and Forests, whose members include agribusiness, pesticide and farming groups.

EPA Administrator Scott Pruitt echoed that sentiment in January, noting in a speech that the study ignored data on farmers’ actual use of the pesticide.

“We have usage data, frankly, that wasn’t considered,” he told the National Association of State Departments of Agriculture on Jan. 30. In general, Pruitt has been unapologetic about easing rules on industry, including power plants, oil and gas drillers and automakers. “Regulators exist to give certainty to those that they regulate,” Pruitt stated in a February 2017 speech at the EPA. “Those we regulate ought to know what is expected of them. So that they can plan and allocate resources to comply.”

Last spring, Pruitt faced a choice on whether to ban chlorpyrifos outright. He went against the view of agency scientists and kept it on the market, stating that the pesticide’s effect on neurodevelopment “remains unresolved.” Several environmental groups suspect the decision came after lobbying from the maker of the pesticide, Dow Chemical. Dow was a top contributor to the president’s inauguration, and its chairman and CEO chaired the president’s Manufacturing Council. Dow and the EPA declined to comment on lobbying and regulation.

In an email statement on the endangered species biological opinion (BiOp) from the National Marine Fisheries Service, the agency said the Endangered Species Act “does not mandate that federal agencies such as EPA adopt NMFS’ suggested measures. The law makes clear that following receipt of a BiOp, the federal agency must determine how it will comply with the ESA and whether it will adopt NMFS’ recommended measures or take another course of action. EPA is currently engaged in that process.”

The upshot of all this is that in the Pacific Northwest, there is no change afoot in the rules or use of pesticides such as chlorpyrifos.

“It’s inconceivable to me,” said commercial fisherman Joel Kawahara at the Seattle Fisherman’s Terminal, “that there, are as a class of people, citizens who feel that they are above nature and that they can continue their business as usual just because they doubt the science.”

Yet for onion farmer Locati, he keeps using a pesticide he deems essential.

“I understand other people make a living on salmon,” Locati said. “And I hope they can continue that on, just as I would like to continue on the family legacy that I have.” Farmers like him, and pesticide makers, could get additional help from Congress. The Republican farm bill in the House would exempt pesticide makers and users from liability if they harm endangered wildlife.