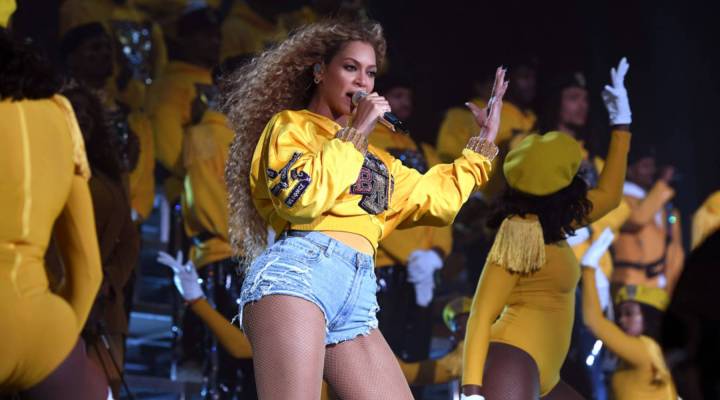 COPY
“Beyoncé opened up a whole can of blackness to the world,” at Coachella, writer Danielle Young says. Larry Busacca/Getty Images for Coachella

“Beyoncé opened up a whole can of blackness to the world,” at Coachella, writer Danielle Young says. Larry Busacca/Getty Images for Coachella
Listen Now

Beyoncé made her Coachella Valley Music and Arts Festival debut this weekend. She’s the first black woman to headline at Coachella. Some reviewers described her two-hour set at the highest-grossing music festival in the country as a tribute to black culture. Danielle Young is a writer and producer at The Root. She talked with Marketplace host Kai Ryssdal about Beyoncé’s performance. The following is an edited transcript of their conversation.

Kai Ryssdal: She didn’t have to do this right? I mean, it’s not like she needs the gig. Why? Give me your best sense. Why did she do Coachella this year?

Danielle Young: Listen, Beyoncé never needs a gig, but she’s an artist. Beyoncé could not work for the rest of her life and still maintain her lifestyle and be fine. But I think like any artist, you know, you need that outlet. Beyoncé opened up a whole can of blackness to the world, and I love that she was able to do that. So I think with that, with this performance, what Beyoncé was trying to do was using her artistry to be a voice for the voiceless, and for right now, that voiceless population is black America.

Ryssdal: That’s a great line, “a whole can of blackness.” I imagine you were, as you were sitting there watching the live stream — first of all, they have a live stream of Coachella, right, so you didn’t actually have to haul out into the desert?

Young: I did not have to go to the desert. Thank goodness (laughs).

Young: I mean, first of all, it was a preparation. Beyoncé put out a statement on her social media basically letting us know what time she would be on in every time zone that there has ever been. And so being here on the East Coast, I knew that my time was 2:05 a.m. Immediately I was a little bit sad, because I’m in my 30s, and that is a time where I’m either rolling over or trying to figure out why I’m not asleep yet. So it was one of those moments that I hit up my friends, and I was like, “OK we have to plan.” Because it’s not enough to just be like, OK, 2:05. No, I needed to be up at 1:45 so I can shake myself awake, I can fix myself a cocktail and sit myself in front of the TV to make sure that I am ready to experience every drip drop. I didn’t want to miss anything.

Ryssdal: Yeah, I hear you. What do you think happens next year though, right? What’s the what’s the follow? I mean, Beyoncé is going to be there next weekend, but Coachella a year from now, then what?

Young: Man, I don’t know, it’s like she constantly raises the bar. Gone are the days where artists put out these albums and people are lined up at the record store waiting to get their hands on a copy. So Beyoncé brings back the nostalgia of waiting for music to be released, waiting to consume albums together. So I think she does that with everything that she releases, and this is going to be another episode of what can’t Beyoncé do. Because this kind of performance is not typically seen at Coachella, where it’s like a full-on spectacle. And hopefully, you know, the artists that sign on for next year realize that there’s a big pair of beautiful silvery boots that needs to be filled, and Beyoncé has left those there for the next artist to really, you know, dig deep within their talents and show that performing at Coachella is more than just letting your hair blow in the breeze. It’s like a full-on show.