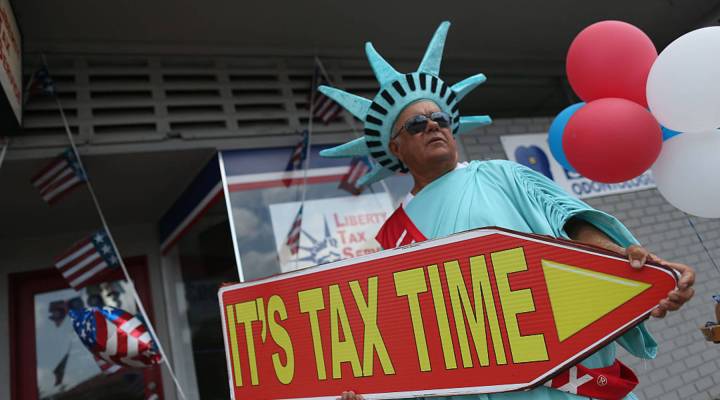 It’s the last weekend before tax season ends, and a lot of us are already thinking ahead, particularly because the whole tax system is going to change. The Tax Cuts and Jobs Act signed into law in December 2017 will apply to our tax filing for 2018, but accountants are already fielding questions from clients about it. We checked in with accountants around the country about it.

Does the new tax law apply yet?

Clients are asking questions about whether the new tax law applies to the taxes filed this year or next, partly because the media has been covering the new tax provisions extensively — and confusing people.

“We’re getting a lot of clients coming in here, and they’re surprised that all of this press and all of these changes doesn’t affect them for the year that they’re filing at that time,” said Rachel Moncure, managing director at Ross & Moncure in Alexandria, Virginia.

Brian Thompson from Little Rock, Arkansas, said his clients “have sat in my office and said they’ve heard so many different stories in the media that they don’t know whether their taxes are going up or down.”

The new tax law “will have a huge effect in terms of the behaviors it incentivizes,” Moncure said. “If you have a smaller mortgage and the mortgage interest doesn’t get you over the new standard deduction limit for a married couple, which is $24,000, which is quite a lot of money, maybe it won’t incentivize homeownership in the same way.”

She said she’s heard a lot of concern from charities about how they might receive less money.

Thompson shared a similar observation: “Arkansas is part of the Bible Belt, and I’ve had many clients that donate money to churches and other charitable organizations. The other day I was meeting with a client who asked me if they were going to be able to deduct their charitable contributions because they had heard that contributions were going were not going to be beneficial in the future.”

Everyone’s trying to change the way their company is structured

Since the main headline about the new tax law has been corporate tax cuts, several accountants we spoke to say their clients are asking what kind of corporation they should be.

“They’re asking questions now, ‘Do I keep the S-corp, or do I switch to a C-corp, or go back to one individual propietorship?'” said Arthur Auerbach in Atlanta. “‘Which one of those options is going to give me the lower tax? Which type of entity choice should I pick,’ and that’s not a very easy decision anymore.”

How people file taxes will be different

We heard from several accountants that lots of people may choose not to itemize deductions because the new law doubles the standard deduction.

“When we start looking at some people, we’re realizing, ‘Oh, the 24k dollar deduction is going to be substantially more than they could do itemizing,'” said certified public accountant Jim Oliver in San Antonio, Texas. This has led Oliver and his clients to look for new ways to take full advantage of the tax system, including shifting some of those charitable contributions we mentioned earlier: “Can we move contributions to a different year or double them up?”

Auerbach is also concerned about the way state and federal taxes are going to interact in Georgia.

These changes may seem stressful for those of us with little experience filing tax returns, but Oliver said adapting was sometimes fun.

“It’s so different in many ways that it’s almost requiring a shift in our mindset. We used to have almost automatic answers to people, and now you have to stop and think it through a little bit more. The more I get into it the more I realize, ‘Well, it’s interesting every time you’ve got a puzzle to solve,’ and that’s essentially what this is. And the puzzle for every person is different, the pieces fit together differently, and so there’s a lot to think about every time we look at a client.”

For Auerbach, adaptation is part of the job.

We’ll be following all the ways the new tax law will affect our lives in the months to come. If you want to share your experience with us, email the show at Weekend@marketplace.org.