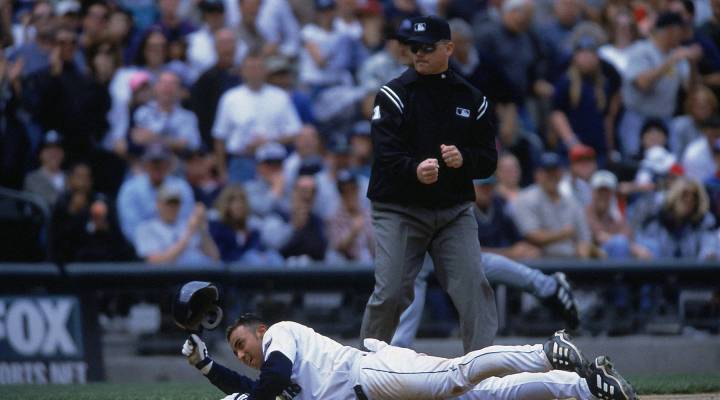 COPY
Carlos Guillen of the Seattle Mariners gets called out by umpire Rich Rieker during a game against the Tampa Bay Devil Rays at Safeco Field in Seattle, Washington. Otto Greule Jr /Allsport
How to be a...

Carlos Guillen of the Seattle Mariners gets called out by umpire Rich Rieker during a game against the Tampa Bay Devil Rays at Safeco Field in Seattle, Washington. Otto Greule Jr /Allsport
Listen Now

Everyone has a dream job growing up: doctor, vet, ice cream taste tester. But how do you actually get the gig? Marketplace Weekend is looking into how, with the occasional series, “How to be a …”

In honor of baseball season, we are looking at how to be an umpire. Let’s get the basics out of the way: Yes, you need good eyesight. Yes, women can be major league umpires, too. And no, you can’t have a favorite team

Rich Rieker is the director of umpire development for Major League Baseball. He told us everything you need to know about how to become an umpire:

I guess it’s been in my blood. I actually met my wife in an umpire meeting. She used to umpire. She gave it up a few years afterwards, but I stuck with it and went to umpire school. I finished my college education in bits and pieces after that and worked in the minor leagues and went onto the major leagues.

If you have good judgment, you’re responsive to constructive criticism and you can react well under pressure situations, you know, those are the basic fundamentals of umpiring. After that, there are two professional umpires schools that you have to go to — those are the two gateways. The top students are selected to go into the minor leagues. Basically, you start with a rules session and you have to get your nose in the rulebook to show good rules knowledge. You’re tested on those rules at both schools. And there’s a tremendous amount of field work and ball and strike work in the batting cages. So the average day starts at about 8 a.m. and winds up around 6 where you go back, have dinner and study. But after five weeks, the best candidates are sorted out and the best prospects move on to the evaluation course. At the major league level, we scout at Triple-A.

By the time they get to Triple-A, these candidates have been in the minor leagues for six or seven years and generally have the skill set of handling pressure situations. We then look at them possibly for a Fall League in Arizona, which is the next step for a Triple-A umpire. After the Fall League, candidates are vetted out, then we look at those umpires to possibly go to major league spring training, and after that, they fill in at the major league level for vacations and injuries. Our average hires in the major league, we hire maybe two or three per year. There are 76 full-time major league umpires.

That average career is about 27 years at the big league level. It comes out to an average — in the last 10 years, we’ve hired 30 people. The biggest difference between a major league umpire and a minor league umpire is that when a routine play becomes nonroutine, the major league umpire can make the adjustment to try to see the play clearly. It’s really handling the pressure. We know that that umpire has seen tens of thousands of pitches and thousands of plays and has the reps necessary to succeed the major league level. You work home plate in the major leagues every fourth game. They rotate clockwise, so obviously an umpire would go from home plate, to third base, to second base, to first and so on. So basically there’s one kind of umpire that does many jobs. The starting salary at the major league level is over $100,000, and then it climbs up with annual increases to where you’re making a very good living with very good benefits.

You know, we’d like to say unfortunately one team loses every night, fortunately one team wins, and I’d like to think we as umpires try to win every night. The umpires are really a third team out there competing just as well. The goal of their successful competition is to have a game that was fairly officiated and as least amount as possible attention drawn to the umpires as you can. We like to go unnoticed and sometimes that’s not always possible, but when a situation does arise, we like to handle it as professionally as possible. I enjoyed every day out there and it was a lot of fun. Getting that call in Chicago to say I was hired to the full-time staff, it’s a phone call you never forget. You’ve attained an ultimate goal, and I think that’s probably my biggest memory. That’s a great career. You get to see the country, you get to meet a lot of neat people and you’re part of baseball, and I don’t think you can ask for anything better than that.