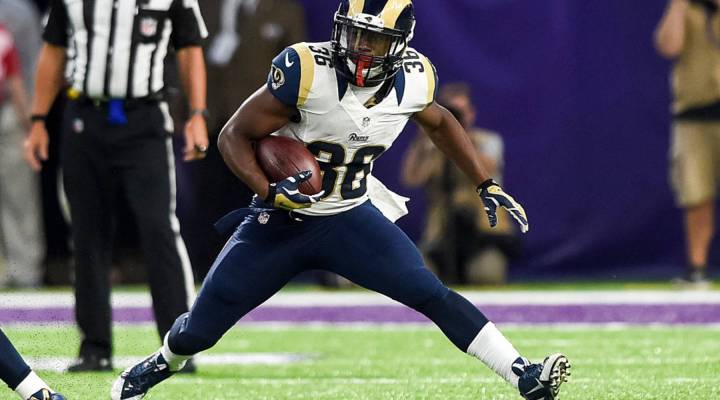 COPY
Rohan Gaines of the Los Angeles Rams carries the ball during a game against the Minnesota Vikings on Sept. 1 in Minneapolis. Hannah Foslien/Getty Images

Rohan Gaines of the Los Angeles Rams carries the ball during a game against the Minnesota Vikings on Sept. 1 in Minneapolis. Hannah Foslien/Getty Images
Listen Now

Tonight is the season opener of the Los Angeles Rams after their relocation back to L.A. from St. Louis.

Before the first snap, the team managed to double its market value, close to $3 billion, thanks in no small part to the fact that L.A. is the second largest TV market in the country.

Factor into the deal the fact that the Rams have a long history in the area makes the deal an even bigger hit with fans.

“They were there before the Los Angeles Dodgers; they were the first team to integrate. There are thousands and thousands of fans, across Los Angeles and the Southland, but also across the country,” Hock said.

Starting in 2019, the team will have a brand new multibillion dollar stadium, which will could generate millions in retail sales, merchandising, as well as high-priced luxury suites.

Even though the NFL shares the revenue from national TV contracts, those contracts are an increasing part of the underlying value.

It’s not all upside though. While moving a team to a new football-crazy city might be good business for the team, those benefits don’t always translate to the city itself.

“Having a major league team, whether or not its football, baseball or you name it, does not convey any economic benefits,” said Ted Gayer, a senior fellow at the Brookings Institution.

According to a study released last week, the tax subsidies municipalities hand out to teams are often greater than what the city gets back in economic development.

Correction: An earlier version of this story had an incorrect title for Jim Hock’s book. The piece has been updated to reflect the correct title.