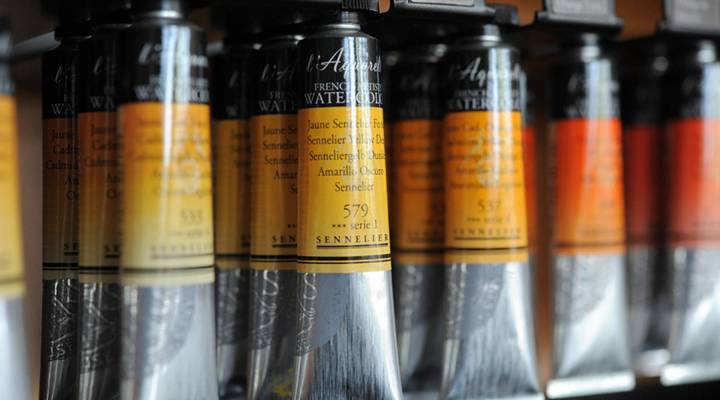 The 2008 financial crisis put many people out of a job, but some took it as an opportunity to redraw their career path.

Ann Shen is an illustrator and author of two books: “Bad Girls Throughout History” and “Legendary Ladies,” the latest. She sat down in an interview with Marketplace host Kai Ryssdal to talk about how the financial crisis has changed her career. The following is an edited transcript of the conversation.

Kai Ryssdal: For those who can’t see the books that I have here in front of me — and they can go online and we’ll have pictures and stuff at marketplace.org — describe your art style for me, would you?

Ann Shen: Well, I paint in gouache, which is an opaque watercolor, and it’s very influenced by ’50s fashion illustration.

Ryssdal: Oh yeah, I can totally see that.

Shen: I love that style and that sophistication of work. But I want to apply it to a more inclusive representation of women and people.

Ann Shen’s rendition of Durga, Hindu goddess of war and a fierce protector, from “Legendary Ladies.”

Ryssdal: How much of your time is Ann Shen artist versus Ann Shen small businesswoman?

Ryssdal: Wow, did I not have that right. Well, how can you possibly output all the art you make when you’re spending so much time runnning your business?

Shen draws from 1950s fashion illustration, but wants “to apply it to a more inclusive representation of women and people.” Above, the Norse goddess of love Freya in her cat-drawn chariot.

Shen: It’s just a lot of density of work in both. When I have the time to make the work, I get into, like, flow, and I’m like a juggernaut when I do that. And then when I’m in the business, it’s every aspect of it — it’s accounting, it’s doing the planning and then also my own marketing for it.

Ryssdal: How did you get started doing this?

Shen: So I graduated college in 2006. I went to UCSD, so I went to a large university and studied writing. So I didn’t have a whole lot of other technical skills besides that. So I worked for a few years in nonprofits here in L.A. And then 2008 happened, and then I couldn’t get another job. I hated the job I was in. And then I thought, “Well, I’m spending all my time reading design blogs and looking at artists’ work, so maybe I should do that.” So I decided to take a figure-drawing class, and then I decided to go to art school.

Ryssdal: Yeah, clearly you’ve got skills right? I mean, you look at these books and …

Shen: You know, I actually didn’t draw that much until I decided I wanted to in my 20s. I didn’t know anyone who went to art school or was a working artist, so I didn’t know how to do that. And then my boyfriend at the time, who’s now my husband, he was going to Cal Arts, and I finally went onto this campus and saw these people doing this. And there was a connection there for me of “Oh, this is how you can make it a career.” And I was also meeting people who are going back to school around that time later in life for a second act. And so I was, like, “I’m going to school. I’m going back to art school.”

Ryssdal: So you made the investment as many did during the financial crisis. Since you couldn’t get the job you wanted, you went back and got training.

Shen: Yeah, because all salaries are frozen, and no jobs are being listed. And I just felt stuck and I was still at entry level at that point. I had done everything I thought I was supposed to do right. Like, I was an excellent student; I went to a UC that was a really great school; I had graduated with honors. And then all that was on the other side was just entry-level jobs that were, like, administrative assistants. And so I realized there’s no more path set out for me, and I done everything right, and I’m still not getting anywhere I want to get, then I need to start making my own path.

Ryssdal: How different do you suppose your life would be if when you had gotten out of school in 2006, the economy wasn’t headed for a crash and things have been humming right along? Would you be here?

Shen: I don’t think I would have taken the risks that I did that early on in my career. I wouldn’t have felt confident or secure enough. I felt like I had nothing to lose then because we were all stuck, so I might as well take time out to go back to school and learn a skill and do something I’ve always wanted to do.

Shen: Yeah, it’s really great. I’ve been working for myself for four years now, which is the longest job I’ve ever kept.

Shen: Is it terrifying?

Shen: Some days it is, but it gets easier. The things that used to terrify me, like, four years ago don’t scare me as much anymore, but it’s new, bigger things that scare me.