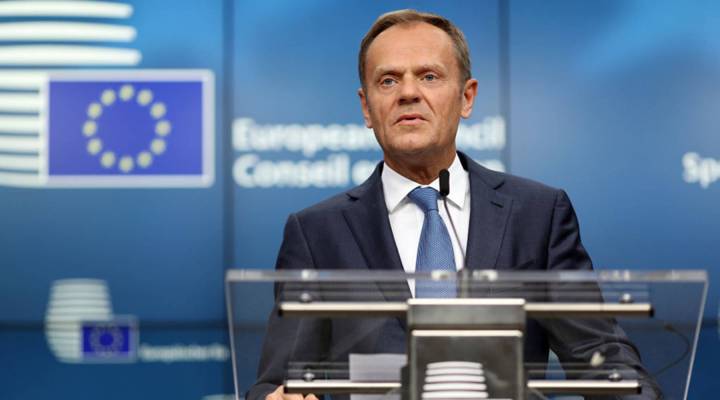 COPY
Donald Tusk, president of the European Council, said any new trade deal with Britain would be “more complicated and costly than today for all of us.” Dan Kitwood/Getty Images

Donald Tusk, president of the European Council, said any new trade deal with Britain would be “more complicated and costly than today for all of us.” Dan Kitwood/Getty Images
Listen Now

Britain got some bad news about Brexit on Wednesday. The European Council, one of the main governing bodies of the European Union, set out its guidelines for the next phase of the talks over the United Kingdom’s future relationship with the bloc after it formally leaves in a year’s time. The council is playing hardball. It said any new deal with Britain would likely make trade more complicated and costly than it is today. Britain and its European trading partners will suffer, said the council. Although unwelcome in Britain, this negative message was not unexpected.

Since June 2016 when the Brits voted in a referendum to leave the EU, the government has struggled to implement the decision and has been heavily criticized by opponents of Brexit both at home and abroad.

Oddly enough, since Britain is a country famous for its culinary shortcomings, much of the criticism has been couched in food-related terms. Prime Minister Theresa May has been accused of “cherry picking” for trying to retain only the choicest fruits of EU membership. Her ministers have been taken to task for trying “to have their cake and eat it” as they seek the best possible trade deal for Britain. A former British trade official said that Britain, by leaving the EU with hopes of striking new free trade deals with fast-growing economies around the world, was “swapping a three-course meal for the promise of a packet of crisps.”

May denied cherry picking or trying to have her cake and eat it. In a keynote speech last week, she said she is seeking the closest possible free trade deal with Britain’s European partners while respecting the referendum result. She also argued that since the rest of the bloc has a trade surplus with Britain of $110 billion a year, it is in the EU’s interests to guarantee frictionless trade after Britain’s departure.

Donald Tusk, president of the European Council, gave that a frosty response:

“Our free trade agreement will not make trade between Britain and the EU frictionless. It will make it more complicated and costly than today for all of us. This is the essence of Brexit,” Tusk said at a news conference in Brussels to publicize the guidelines for the next phase of the Brexit negotiations. Tusk said there could be a free trade deal with Britain rather like the one the EU recently struck with Canada. But he offered no special access for Britain’s all-important finance industry. And he firmly rejected May’s discreet attempt at cherry picking.

“A pick-and-mix approach for a nonmember state is out of the question. We’re not going to sacrifice this principle. It’s simply not in our interest,” Tusk said.

The Brexiteers are undaunted, though. And, going back to the food metaphor, Cabinet minister Michael Gove recently talked of a recipe for success: Britain “freeing itself from the table d’hote (fixed menu) of EU membership” and striking its own trade deals around the world or “dining a la carte across the globe.”

In other words, after Brexit, the world will be Britain’s oyster. Cynics point out, however, that seafood has a tendency to go bad.