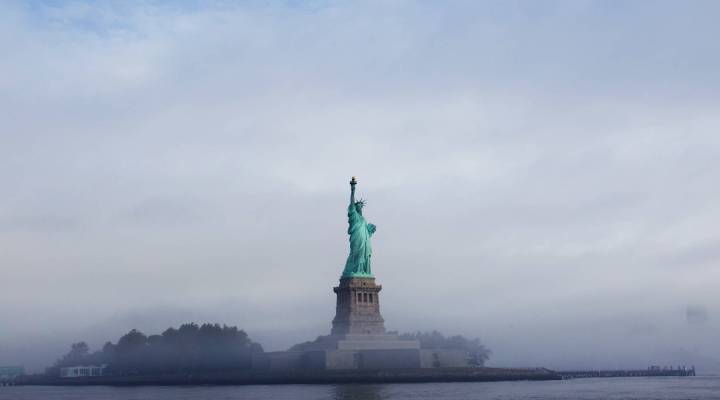 In the debate over immigration, President Donald Trump has advocated for a system that favors skills over family reunification. He’s called for an end to so-called chain migration, claiming that under the current system, a single immigrant can bring in virtually unlimited numbers of distant relatives.

But truth is, there’s very little that’s quick or easy about family migration.

Ella, a 66-year-old woman living in Los Angeles, said she’s been waiting for six years for her adult children in the Philippines to join her in the United States. Marketplace agreed to not use her full name because she worries that speaking out could hurt her case.

Her story starts in 1991, when she brought one of her youngest children to the U.S. for special medical treatment. Ella’s daughter, Iris, was born with a rare genetic disorder known as Apert Syndrome, which has left her permanently disabled and unable to care for herself. When they both left the Philippines for L.A. more than 25 years ago, Ella said she remembers saying goodbye to her three other small children, who stayed behind with the family.

“I promised my children, ‘don’t worry, I’ll be back.’ I thought all and all, it will take just a year,” Ella said.

But because Iris needed multiple surgeries, they ended up staying. Ella got a job as an insurance agent, started volunteering at the local church and eventually married a U.S. citizen after her husband abroad passed away.

Then, when she got her green card in 2012, she filed a petition to her bring her son and two daughters to California.

“Imagine all the important moments that I have missed: you know, their birthdays, Christmases, first communion,” Ella said.

Ella’s children, now in their 30s, are still waiting, along with close to four million other would-be immigrants around the world.

“It’s a myth that people can immigrate here quickly based on family relationships. In many cases, they absolutely cannot,” said Susan Cohen, an immigration lawyer with Mintz Levin in Boston.

She said the government doesn’t set caps on the number of spouses, minor children or parents of U.S. citizens who can come to the country each year. But there are limits to the number of family-based immigrant visas awarded for other types of relatives, like siblings and adult children.

And the wait to get here – depending on which country you’re from and how you’re related to the U.S. citizen or green card holder – can be epic.

Because a single country can’t account for more than 7 percent of all family-based visas issued each year, would-be immigrants from countries like Mexico, China, the Philippines and India face particularly long waits.

Had Ella become a citizen while her kids were still young, they might have been here in a year. But once children turn 21, they are pushed to the back of the line, which could mean a decade or more. And if they’re married and trying to come from the Philippines? Two decades.

“It’s an extremely long waiting period,” Cohen said. “A huge amount of things can change in that amount of time.”

Ella’s children now have children of their own. But they’ve held off getting married to keep their place in line, as the U.S. gives lower priority to married adult children.

And the wait isn’t the only challenge. Just putting the process in motion can cost petitioners thousands of dollars in legal fees. They also need to prove they can support their relatives when they get here, said Jennifer Hunt, an economics professor at Rutgers University.

“They need to submit their tax returns to show that they’re earning over 125 percent of the poverty line,” Hunt said.

Petitioners are financially responsible for a relative for up to 10 years, or until they become a citizen.

Roughly two-thirds of people who come to the U.S. legally each year do it through family migration. But Hunt said there’s little hard data on how the economic lives of those immigrants take shape once they get here – like what type of work they do, or how long they stay.

“It’s really quite shocking actually how little we know even about the administrative data that must be somewhere,” Hunt said.

Ella said she thinks her college-educated children will have better job opportunities in the U.S. and will be able to earn more – even if it’s takes six more years of waiting. She’ll be 73 by then, and said she’d like someone to look after her, and after Iris.