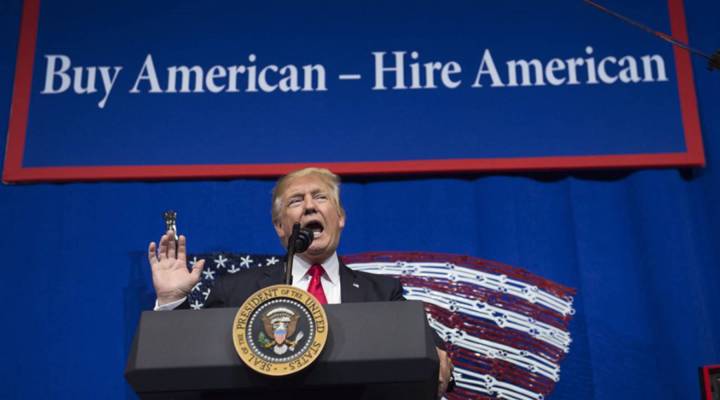 President Donald Trump signed an executive order back in April 2017 called “Buy American and Hire American.” It instructed the agencies of the federal government to “rigorously enforce and administer the laws governing entry into the United States of workers from abroad.”

Over the past year and a half, that’s resulted in a bunch of changes — some small, some big — to immigration policy.

Those changes are showing up.

Peter Lin is a 28-year-old management consultant with a couple of master’s degrees (we’re not using Lin’s real name or identifying his employer because it could jeopardize his job). He wants to grow in his career, wants to move on. But he feels trapped.

“It’s really frustrating for me because it’s really hard for me to transfer jobs,” he said.

Lin emigrated from China. He has a skilled worker H-1B visa. The problem is that in order to switch jobs, he has to transfer his visa from one employer to another. That process under the Trump administration now takes six months or longer. It used to take a couple weeks. Even though he’s perfectly qualified, potential employers are telling him: Forget it. They don’t want to wait six months.

“It’s really stressful because my future career is limited by the visa,” he said.

Lin is one of many educated, skilled people whose lives have essentially been put on hold by a pile of changes to immigration policies. In Lin’s case, the administration ended expedited processing for urgent applications. That’s why it now takes months where it used to take days. They are taking so long, in fact, that temporary work authorizations like those given to recent graduates are running out.

“People may not be able to start jobs or continue,” said Justin Storch with the Society for Human Resource Management. “A lot of people are looking at a situation where employers are going to have to be taking people off the payroll, potentially.”

It’s also become more difficult to extend an H-1B work visa. Immigration officials have become more strict. New rules make it easier for them to reject applications. In the last quarter of 2017, there was a 70 percent increase in applications held up by further questioning by immigration, according to the National Foundation for American Policy. Denials increased 41 percent.

“There’s this wall being built to restrict legal immigration and make it as hard as possible as a deterrent for companies and people to use the process that exists,” said Nell Barker, a Chicago-based immigration attorney who has seen a lot of clients affected by the new policies.

This is not the best time to be making work visas more difficult, Storch said.

“There are more open jobs right now than Americans looking for jobs, so employers are really looking for the talent they need, wherever they’re from,” he said. “So visas, immigration is obviously required in that situation in many cases.”

U.S. immigration officials declined to be interviewed for this story but said in an August press release they were committed to protecting wages and working conditions. They also said the total number of visas granted met the limit of 85,000 set by Congress.

“They are enforcing the law as it is,” said Sara Blackwell, who heads the advocacy group Protect US Workers. She sees the policy changes as a way to fight abuses of the work visa system.

“American tech workers are being forced to train these foreigners who are coming in and then they lose their jobs,” she said.

Firms with more than 15 percent foreign workers do tend to pay substantially less than other firms, according to the Migration Policy Institute.

“That’s definitely a good issue to focus on. The H-1B visa program was, of course, never intended to replace U.S. workers,” said MPI analyst Sarah Pierce. “But it might not be the best way to go about it,” she continued. “The Trump administration is making life more difficult not only for foreign consulting companies that might be replacing U.S. workers, but they’re also making it more difficult for legitimate employers that are just trying to hire the best and the brightest.”

The changes to immigration policy rolled out over the past year and half are not the end of what is an evolving set of rules. The administration is expected to announce additional changes next year.