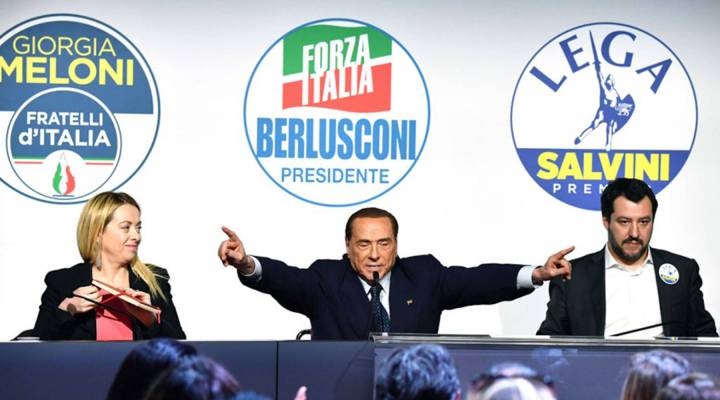 Immigration is the key issue in this Sunday’s general election in Italy. The country has taken in more than 600,000 migrants over the past four years, most of them arriving from North Africa, crossing the Mediterranean in small, overladen and leaky boats. Many have been rescued at sea.

The influx is not generally popular in Italy. And that’s been reflected in the election campaign.

Former Prime Minister Silvio Berlusconi has promised that if the center-right coalition, which includes his Forza Italia party, the anti-immigrant Lega party and the more right-wing Brothers of Italy, wins power, it will deport hundreds of thousands of the migrants.

Huddled inside their tents at a disused bus depot on the outskirts of Rome, more than a hundred migrants seem oblivious to the political storm gathering across the country. Johannes Skodana from Eritrea says he’s relieved and happy to be living in Italy.

Piazzale Maslax, a migrant camp on the outskirts of Rome.

But in a marquee on one side of the makeshift camp was a reminder that Skodana and the other migrants are not entirely welcome in Italy.

Volunteer Giulia Rompel, who works for Baobab Experience, the charity that runs the camp, gave a lesson in both the English language and human rights.

She taught a small group of migrants phrases like: “I need a lawyer because it’s my right”; “Why are you arresting me?”; and “I need food and shelter. It is my right.”

After the lesson, Rompel told Marketplace: “All the workers here are worried about the election on March fourth and what will happen to this camp and to the migrants. The atmosphere in Italy is very heavy at the moment. Politicians are stirring up hatred and fear in order to get elected.”

The recent wounding of six migrants in a drive-by shooting in the central Italian town of Macerata, allegedly by a right-wing extremist, has raised the level of tension.

But the pushback against mass immigration into Italy was already well underway before the election campaign started. And not just from the fast-growing neo-fascist groups and their shaven-headed supporters. Resentment and fear over the influx has gone mainstream.

“Immigration must be controlled, restricted, limited,” Linda Sumoni, a teacher from Tuscany, told Marketplace. “Too many people. Many, many, many people come to Italy at this moment,” she said.

Forza Italia would certainly agree with that. Lucio Malan, who represents the party in the Italian Senate, says that the vast majority of the migrants are not refugees, and the Italian people are fed up with their demands.

“They ask for food, housing, TV, Wi-Fi. They don’t like pasta, which is the main food for Italians,” he said. Malan, who describes himself as a moderate, said each immigrant is costing Italy $60 a day. His coalition is pledging to repatriate 600,000 of them, even though it might prove quite costly.

Opponents of the repatriation pledge say it could cost more than $3,500 per migrant to implement and would, in any case, be practically impossible to achieve.

“Where do you send these people without treaties, without agreements with the countries they came from?” said Roberto d’Alimonte, professor of political science at LUISS University in Rome. “Where do you send them? To the moon? To Mars? This is baloney. This is nonsense.”

The center-right coalition claims that the hundreds of thousands of mostly Muslim migrants here represent a social time bomb in this largely Catholic country. But their opponents say it’s surely a Christian duty to welcome and absorb the incomers.

Manlio Di Stefano, a lawmaker with the anti-establishment Five Star Movement, the single-most popular party in the country, argued that the influx is manageable.

Di Stefano added that the center-right should focus on the real emergency: Italian unemployment, which has doubled since the financial crisis.

But the polls suggest immigration is the bigger worry.

This is the issue that is shifting the whole landscape of European politics and seems certain to shake up Italy’s political kaleidoscope as well.