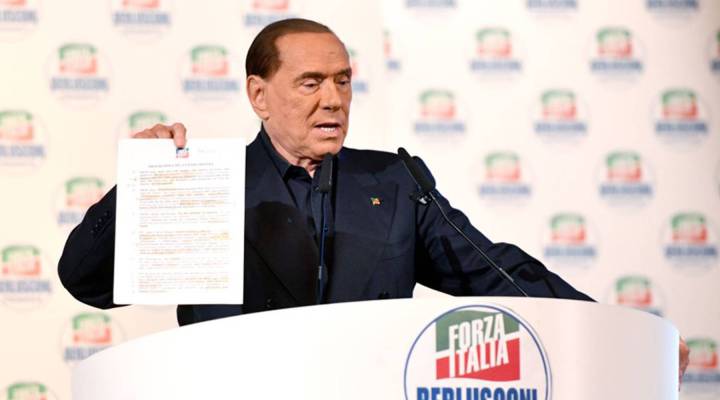 COPY
Silvio Berlusconi, leader of the Italian right-wing party Forza Italia (Go Italy), gestures as he delivers a speech on stage during a campaign rally in Milan on Feb. 25, 2018, ahead of the Italian general elections. PIERO CRUCIATTI/AFP/Getty Images

Silvio Berlusconi, leader of the Italian right-wing party Forza Italia (Go Italy), gestures as he delivers a speech on stage during a campaign rally in Milan on Feb. 25, 2018, ahead of the Italian general elections. PIERO CRUCIATTI/AFP/Getty Images
Listen Now

Italians are preparing to vote in their general election on Sunday. The result seems unlikely to be clear cut. But if, as expected, the center-right coalition wins most votes, the media mogul and former Prime Minister Silvio Berlusconi will be a major figure. He’ll play a key role in creating the new government — a stunning comeback for the 81-year-old convicted tax fraudster and highly controversial businessman turned politician.

Not everyone is happy that Berlusconi still dominates national politics in Italy.

“I’m not surprised but I am disgusted,” said teacher Sylvia Bisagni, while charity worker Jiulia Rompel told Marketplace, “Berlusconi is the cancer of Italy and we’re not getting rid of it.”

But the tycoon, a four-time prime minister, still has his fans. He is widely praised for his ability to unite Italy’s fractious right wing into an electoral alliance and for his political skill.

“He has an extraordinary political instinct,” said political commentator Patrizio Nissirio. “He can talk, as we say in Italy, to the belly of the electorate.”

During the election campaign, Berlusconi made many crowd-pleasing promises that would be very difficult, if not impossible, to deliver. He pledged, for example, that if his coalition wins power, it will deport more than 600,000 unauthorized migrants. A lot of voters like him, Nissirio said.

OK, he is a convicted tax evader. And yes, he will be forever tainted by the scandal surrounding the so-called “bunga bunga” parties where prostitutes and politicians mingled. But Roberto d’Alimonte, a professor of political science at LUISS University in Rome, says Italy is often willing to forgive certain types of sin.

Even Berlusconi’s critics have a perverse sort of national pride in him. When it comes to populist billionaires winning political power, it was Italy first. Berlusconi made it to the pinnacle of political power in his country almost a quarter of a century before U.S. President Donald Trump.

“Rather than see Berlusconi as the Italian Trump, Italians see Trump as the American Berlusconi,” said Cecilia Sottilotta of the American University of Rome.

There’s at least one big difference between the two billionaires turned political leaders: Because of his tax fraud conviction, Berlusconi cannot take office. If his coalition wins on Sunday, he will have to wield power behind the scenes.