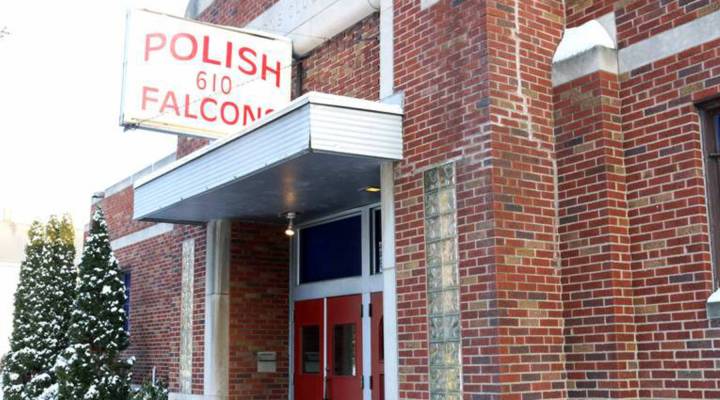 Erie, Penn. was built on manufacturing, but a lot of those companies and the jobs they offered have up and left, and that’s left a lot of people in Erie feeling left behind — which is how we found ourselves back at the Polish Falcons Social Club. It’s a neighborhood gathering spot where people of all ages come after work for a drink or two. We were here last January, right before the inauguration, to see how people were feeling about their economies going into a new administration. We heard people lamenting the lack of jobs, cuts at G.E. and the death of manufacturing.

Now we’re back, one year later, to see how things have changed. Marketplace host Kai Ryssdal talked with several Polish Falcon regulars, beginning with Fred and Nancy Dash. They’re retired and living on about $3,000 a month.

Nancy Dash: Erie is pretty much poverty stricken. Sorry. There’s not a lot of good paying jobs for the – I have grandsons, I have grandchildren. They can’t find a decent job here. One just started working at a dog training place. Started today.

Kai Ryssdal: How much is he gonna make? Do you know?

Ryssdal: So what do you think is the future of this city?

Nancy Dash: I think it sucks. I think it’s done. I really do. I don’t think Erie is gonna go too far.

Ryssdal: What do you think of the future of this country — of the businesses and the companies and of the people that make things in this economy? What’s your guess as to how that’s gonna go?

Ryssdal: Did you vote for Mr. Trump?

Nancy Dash:  I can’t really honestly tell you that.

Ryssdal: How you feeling about how he’s doing?

Ryssdal: You happy with him?

Nancy Dash: I think so. My husband is.

Fred Dash: Mr. Trump left a billionaire lifestyle because he’s an American and loves this country. That’s how I look at it. And you have these idiots, like Pelosi. They’re idiots. What’s wrong with them? They can’t accept that they lost the election.

Ryssdal: You think that’s what it’s still all about?

Ryssdal: Are you better off today than you were a year ago?

Fred Dash: Because of Trump, yes.

Ryssdal: So, you like what Mr. Trump is doing on the economy, the tax bill and regulations. All of that?

For years, GE Transportation was Erie’s main economic driver. But in 2016, there were 1,500 job cuts and plans for another 600 in 2018. Now, most of the decent-paying jobs here are at the hospital, the university or Erie Insurance Company, places that require skills that are different from the ones a lot of the lifelong residents of this city have. Bob, who did not want to give us his last name, is 62 and an assembler at General Electric. He’s been there for 14 years and makes around $72,000 a year.

Bob: I am very angry. I’m very angry, very angry at what’s happening to this country. Coming to the end of my working life and to see this happening and watch the younger guys I work with — they’re going to have to struggle for 20 years. They don’t know from month to month what’s going to happen. And you should go to work and be able to know that you have a job, that you can make your house payments, or whatever, send your kids to school. That’s just the uncertainty of everything now. The American people better wake up if they haven’t. We’re done. I believe we’re done as a country.

Ryssdal: So, are you just getting up in the morning and putting in your time at GE?

Johnette Kent has lived in Erie her entire life. She’s 66 years old and retired from the state Department of Public Welfare.

Ryssdal: Here’s a question though: I mean, the economy is growing. Jobs are being added. Consumers are extremely confident. They’re spending money.

Kent: Let me ask you this: Now, how many jobs? When they say jobs are added, does that balance the jobs lost? I’m not sure they are. Lower-paying jobs are being added, instead of the manufacturing jobs that paid a decent living.

Ryssdal: Here’s the other part of the economic equation. There’s a big tax-cut law that just went into effect. Right? People are going to start seeing money in their paychecks. Businesses are happy because regulations are being cut. You’re not having that?

Kent: It’ll all come home to roost when the company is bankrupt. Who’s going to pay the bills then? People who were eating bread, suddenly you’re giving them cake. It may look good, but again it’s all smoke and mirrors. The money for a revitalization of the infrastructure has to come from somewhere. The way the government gets money is taxation, come on.

What was interesting about that night at the Polish Falcon was that there was a kind of divide — an economic generational divide between who was feeling alright and who wasn’t. Sitting at a table at the back of the bar is a group of 5 friends. Two of them, Elspeth Koehle, 41, and Martha Nwachukwu, 25, work as regional organizers for Erie County United.

Elspeth Koehle: I’m doing much better this year than I was last year, and I think it’s a bit of a reaction to recent events.

Ryssdal: The organizing business is good?

Ryssdal: How about your own personal economy? How are you feeling?

Koehle: Yes. I mean, my brothers and sisters in Erie, I don’t feel so great about how they’re doing. And that’s why I’m doing the work I do.

Martha Nwachukwu: I graduated college, and I got a job, and I think I’m making the natural progression I’m supposed to.

Ryssdal: What would make it better for you?

Nwachukwu: If I didn’t have student loans to pay.

Ryssdal: Can you afford a car and an apartment and all of that?

Nwachukwu: Yeah, but all on loans. I hate having debt. I hate the idea of debt.

Ryssdal: So, in five years, where do you think you are economically? I mean if you’re doing fine now at 25, not great, but fine, how you gonna be doing at 30?

Nwachukwu: I hope to have my student loans paid off. I would love to own my car. And I honestly don’t know, I don’t know where I will be at 30. Beyond this, I hope.

Ryssdal: Are you two optimistic? Not just about Erie, but about your own economic futures? Elspeth?

Koehle: Of course. I mean, she’s 25 years old. I hope she has optimism, because if she doesn’t, she’s gonna have a hard go, you know? But yeah. Right?

Matt Texter is 39. He’s a graphic artist, originally from Grove City, Penn. He came to Erie looking for some career advancement, and he found it. But his personal economy in the last year?

Matt Texter: It’s like two paychecks away from being not good, if you include debt and mortgage and things like that. You know, not much of a savings.

Texter: I have a lot of hope that it’s going to get better. I don’t feel like I’m stuck because I like Erie. You know what I mean? It is affordable, and it’s given me a lot. I see a lot of potential in Erie. I mean, it’s beautiful. I don’t know if you’ve been here in the summer, but it’s a beautiful place to be.