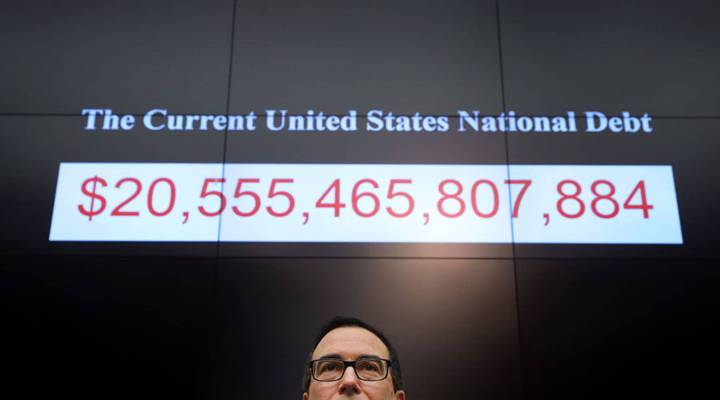 COPY
“I'm not concerned about market volatility. The fundamentals are quite strong,” Treasury Secretary Steven Mnuchin said today during testimony before the House Financial Services Committee after two days of historic losses in the stock markets. Chip Somodevilla/Getty Images

“I'm not concerned about market volatility. The fundamentals are quite strong,” Treasury Secretary Steven Mnuchin said today during testimony before the House Financial Services Committee after two days of historic losses in the stock markets. Chip Somodevilla/Getty Images
Listen Now

We are now two days away from another potential government shutdown and there’s no budget deal in sight. The government pushed through a temporary funding bill last month to end a three-day shutdown. Senate Democrats dropped their objections to the bill in exchange for Republican leaders agreeing to discuss immigration and other contentious issues, but the funding was only slated to last through Thursday. Politics aside, there are fundamental money issues at play in this fight — fiscal policy — that play into what’s happening in the markets. Marketplace senior reporter Kimberly Adams gives host Kai Ryssdal the view from Washington, D.C.:

So first update us on the shutdown fight. No one really wants a shutdown in the middle of all this.

The Senate is scrambling for a two-year budget deal. In the house, there’s currently fighting over defense versus nondefense spending. Any deal will add even more to the deficit on top of tax cuts — it’s not the kind of money you can just offset with spending cuts to discretionary programs.

So what you’re really saying here is that the government’s fiscal policy is a mess?

A mess that’s being kept afloat by deficit spending and a rising national debt, which means more government borrowing.  The U.S. government is on track to borrow about a trillion dollars this year, which is up 84 percent from last year. And you can say that’s all fine so long as people want to keep buying U.S. treasuries. We’ll hear more about that soon, but now investors are starting to worry all that borrowing is going to push up inflation. Also, Treasury Secretary Steve Mnuchin said today he didn’t think all the borrowing was really affecting markets much.

But some investors and economists would disagree since a ton of government borrowing can “crowd out” other investments.

Yes, and paying interest on all that debt can mean the government has even less money available for things that might stimulate the economy. Infrastructure, for example. The Congressional Budget Office says we’ll probably spend at least $5.6 trillion on interest in the next decade. Plus, all that government borrowing creates competition for other borrowers out there.

So the counter to inflation is monetary policy, which comes out of the Fed, which leads to “What is Jerome Powell thinking?”

That’s what the markets really want to know right now. The Fed was on track to do possibly three more interest rate hikes this year, and now it’s a little less clear what the Fed is going to do. If inflation goes up too much, the Fed raises interest rates to slow it down, which raises the cost of borrowing for everybody — you, me, businesses and the federal government. So to bring it back from Wall Street to Washington, a deal to avoid a government shutdown the day after tomorrow will probably have to include some kind of additional spending, financed by debt in a time where market conditions the government helped create are making it more expensive to borrow money.