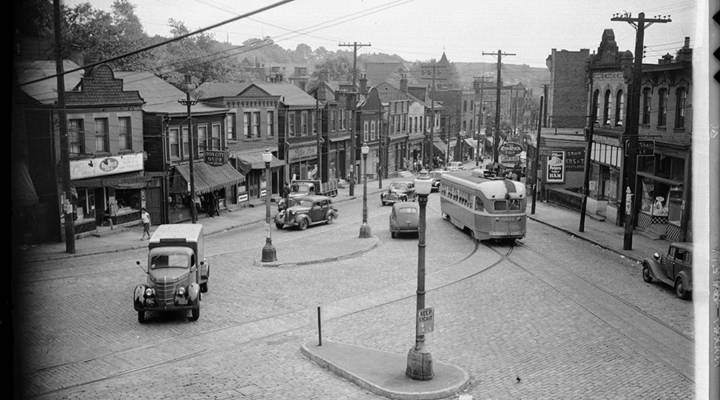 COPY
In the Hill District of the 1940s, Herron Avenue marked the boundary between the upper-class "Sugartop" neighborhood and the working-class "Middle Hill." Getty Images/Teenie Harris Archive/Carnegie Museum of Art
Shelf Life

In the Hill District of the 1940s, Herron Avenue marked the boundary between the upper-class "Sugartop" neighborhood and the working-class "Middle Hill." Getty Images/Teenie Harris Archive/Carnegie Museum of Art
Listen Now

For a handful of decades in the middle of the 20th century, Pittsburgh — yes, Pittsburgh — was a nexus for the Black Renaissance. Influential musicians like Lena Horne and Billy Strayhorn passed through, so did sports figures like Joe Louis and Jackie Robinson. And the Pittsburgh Courier, the local black newspaper, was read across the country. In his new book, “Smoketown: The Untold Story of the Other Great Black Renaissance,” Mark Whitaker details the rise and fall of the city as a center for black culture. What follows is an edited transcript of his interview with host Kai Ryssdal.

Kai Ryssdal: We should say at the outset here you are a Pennsylvania guy, mostly Philadelphia though, but you had family in Pittsburgh and you went back a lot.

Mark Whitaker: My dad grew up in Pittsburgh. And he had moved away. I was born, as you say, outside of Philadelphia, but I used to go and visit every year. My grandparents were still there. They were undertakers. My grandfather, at a certain point, suffered a stroke, and my grandmother took over the business. But, you know, if you visited Pittsburgh in that era, you would have never known that just 20 years earlier, it was one of the most vibrant and influential black communities in all of America.

Ryssdal: It is an amazing story that you tell in this book for a couple of reasons. One is the relatively brief period of time which, as you write, black Pittsburgh was so dynamic, but also the people and the things that came out of there, right? I mean, Lena Horne and Billy Strayhorn and music, August Wilson, the Negro leagues in baseball, the Pittsburgh Courier, the newspaper — there was so much. It’s a sense of history that you can’t quite wrap your brain around.

Whitaker: Well, you know, when I was working on this book, I would tell people that I’m working on a book on the legacy of black Pittsburgh and that I would say what it really is, is a story of black history in the middle of the 20th century because every major story in black history passed through Pittsburgh. You had swing and the birth of bebop, Joe Louis, you had the Jackie Robinson story in the Negro leagues, but you also had huge political influence. It was really in Pittsburgh, thanks to the Courier, that that led the migration of the black vote from the Republican Party to the Democratic Party in 1932.

Ryssdal: The thing that jumps out at you, at this, as you read this book is how brief this moment in time was. It was basically like 30 years, ’20s to the ’50s. So what happened? How did it disappear?

Whitaker: I would say that the three major factors that contributed to the decline — and it was very fast — so like a lot of Northern cities where black folks had migrated, once the industries that had attracted them started to go in decline, white folks started moving out of the city, moved to the suburbs. Black folks were stuck there. It’s a sad, familiar story. In Pittsburgh, there was also the factor of urban renewal, which was particularly dramatic in Pittsburgh. And then the third factor which gets less attention is what you could call sort of black brain drain. That with the civil rights movement and affirmative action and so forth, in that era, talented ambitious black folks, like my father, were able to leave Pittsburgh to go to college and have careers outside of Pittsburgh. And they never came back. So at precisely the point where these black neighborhoods in Pittsburgh needed leadership, they were losing it to the wider world.

The Bethel AME Church, the last building to be destroyed on the Lower Hill in 1957.

Ryssdal: So Pittsburgh today, I mean, it’s moved past the whole, you know, steel industry historical context, right? And it’s, I mean, Uber’s there doing self-driving cars. And Pittsburgh is on the short list for Amazon second headquarters. And so I guess the question is how do you gauge the odds of success of present day African-Americans in the future economics of Pittsburgh? Are they going to be able to get back?

Whitaker: Well, as you say, Pittsburgh is undergoing yet another broader renaissance. The black neighborhoods have not yet, but I’m hoping that learning this story will give both black folks in the city but also, you know, business and political leaders a sense of pride in the past and hope that, you know, perhaps some of it can be brought back.