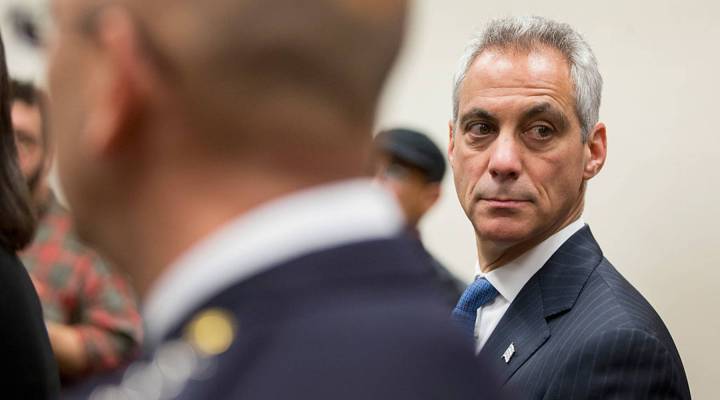 Sometimes “jagoff” can be a compliment.

Kai and Molly’s conversation with Chicago Mayor Rahm Emanuel was combative — sometimes playfully so, sometimes not. He objected to our questions and then softened the blow with some light name-calling before settling into a long anecdote. It didn’t matter the topic either: As we hopped from immigration to education to the city’s finances to his tenure as Obama’s chief of staff, the mayor was always verbose and punchy.

But then again, Emanuel’s always kind of punchy, and that’s what makes him one of the most fascinating local politicians in the still-young Trump era. When the president cuts down your city and threatens to “send in the feds” via tweet, some concerned citizens might want their mayor to hit back.

As journalist Edward McClelland said in Chicago Magazine last month, “rebranding himself as an anti-Trump warrior” could help Emanuel recover from the Laquan McDonald scandal and other setbacks:

He’s equipped to fight for us. All the qualities that make him insufferable to so many—his arrogance, his contempt for critics, his willingness to jettison any principle that might interfere with political advantage — are virtues in a battle against a president who is, arguably, cut from the same cloth. To use a Chicago term, Emanuel may be a jagoff, but he’s our jagoff.

Molly Wood invoked that last line when she introduced Emanuel this week, and Kai Ryssdal had a cow. We’re a family show, he said. We’re gonna get the little “E” for explicit on Apple Podcasts. Molly said no way, and let another “jagoff” fly.

So who’s right? When Mark Cuban got up at a rally last summer and asked “Is there any bigger jagoff in the world than Donald Trump?” was he pandering to his hometown crowd with some local slang, or hurling a nasty insult?

First, we should establish, if you’re not from Chicago or Pittsburgh, that “jagoff” is legit. It’s in the dictionary! It’s an insult you hurl at someone who’s stupid, foolish, inept, etc. But then, a lot of swear words are in the dictionary. Being a quote-unquote “real word” doesn’t absolve Make Me Smart from getting the dreaded “E,” does it?

Well, it’s important to note that “jagoff” isn’t meant to reference any kind of, um, sexual act. It comes from “jag,” which means to poke or annoy, Carnegie Mellon University professor Barbara Johnstone told the Pittsburgh City Paper back in 2012. People tend to confuse “jagoff” with that other thing as Chicagoans and Pittsburghers dropped the working-class, European accents immigrants used when they brought the term to America.

Jagoff. One word. Pittsburghese.
A language gift from our Scots Irish early settlers.
“Yinz see him cut her off? What a jagoff!”

Folks from both cities have embraced the term: Lumpen magazine published “A Field Guide to Chicago Jagoffs” and YaJagoff.com sells shirts emblazoned with more Pittsburghese.

All told, it’s not too explicit for a family podcast, though that doesn’t mean Kai’s wrong — plenty of people still hate the word. After hosts and guests let a few “jagoffs” fly on Chicago Public Radio, a column in the Chicago Reader argued the word’s still offensive if enough people think it means something gross. Well aware of its origins, Pittsburgh Post-Gazette Executive Editor David Shribman once banned the word from the paper anyway.

The counter-argument, laid out in the Reader by Northwestern professor and offending public radio guest Bill Savage, is pretty convincing:

“We’ve got freedom of speech, but we shouldn’t use it or we might offend somebody. That’s a jagoff attitude.”