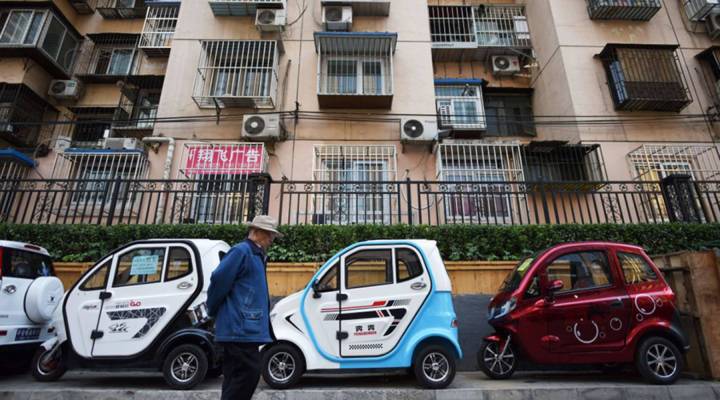 COPY
A man walks past electric cars and tricycles on a sidewalk in Beijing in 2017. Greg Baker/AFP/Getty Images
Marketplace Tech Blogs

A man walks past electric cars and tricycles on a sidewalk in Beijing in 2017. Greg Baker/AFP/Getty Images
Listen Now

In China, if you buy an electric vehicle, you’ll receive a license plate for free — only one of the benefits the Chinese government is offering in order to rev up the country’s EV market. Chinese consumers bought more than double the number of electric cars that the U.S. did in 2016, according to analyst data, and the government has said it wants 11 percent of all cars sold there to be electric by 2020. Marketplace Tech host Molly Wood talked with Marketplace’s China correspondent Jennifer Pak about the supply and demand of the Chinese electric vehicle industry. Below is an edited transcript of their conversation.

Molly Wood: Jennifer, what’s the infrastructure like there? What’s necessary for electric vehicles to really take off?

Jennifer Pak: Here in China, the charging stations, they’re are not nearly enough, according to analysts. State media says there are roughly some 170,000 charging stations. The other factor is that most of the people living in the major cities, they’re living in high rises, meaning they can’t just pull out a cable cord and charge their car. But this is not the biggest deterrent. Analysts say the Chinese consumers are actually quite flexible when it comes to this point about charging stations.

Wood: So they’re, you think, 170,000 charging stations in a country of 1.4 billion people, not to mention a gigantic land mass. That definitely does not sound like enough.

Pak: No, but the government is fully behind this idea that electric cars are the future. So the infrastructure maybe is not fully in place yet, but it will be.

Wood: And who are the major companies that are working on electric cars there? Are there any in China besides Tesla?

Pak: Well, Tesla is in the luxury electric vehicle market, let’s put that out there, and they have plans to perhaps start manufacturing locally by 2019. If that really does go ahead, what they’re going to find is a little bit of competition from BMW, Audi, Mercedes. They’re all going to come out with their own electric vehicles with their Chinese joint ventures. For the more affordable range though, this is primarily dominated by Chinese brands. Leading the pack of course, is Build Your Dreams, or BYD. This is the company that counts Warren Buffett as an investor, and they’re moving into not just commercial vehicles, but electric buses. And in their home base in Shenzhen, they’re aiming to help the government achieve its goal of having only electric buses by the end of the year.

Wood: Now we’ve talked to you before about how China is not a free capitalist market, it’s a communist country, and the government has a lot of power over business there. What role does the government play in electric car rollout?

Pak: A lot — that’s the short answer. And here’s how an automotive analyst at IHS Markit in Shanghai, James Chow, describes it:

James Chow: This is really artificial demand. This is, in fact, one of the greatest distortions in terms of national natural supply and demand in the automotive world which we’ve ever seen.

Pak: So what he’s pointing to are two things. First, the electric cars are still very expensive. So the Chinese government steps in with subsidies of $10,000, sometimes even more per car. What that means is that electric vehicles are now roughly the same price as a normal car. But in China, just because you have the money to buy a car, does not mean you can drive it. License plates here are restricted in China. In some big cities like in Beijing, you can only get a license through a lottery system, or here in Shanghai, you get it through an auction system. So if you get an electric car, the government has said you can get a license plate for free, but not only that, you can jump ahead of the line and you can drive your car right away.