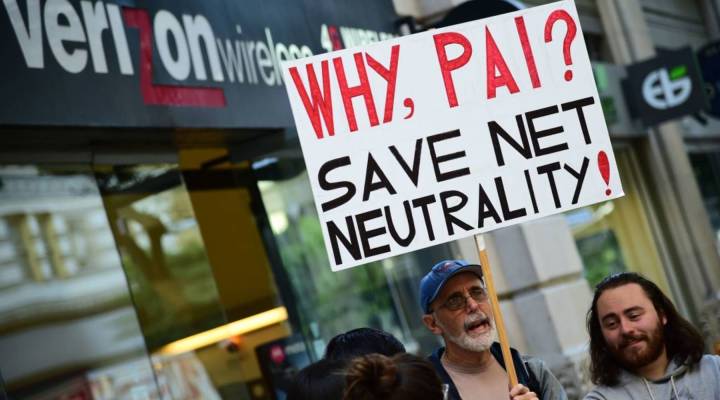 The Federal Communication Commission voted today to roll back net neutrality rules put in place during the Obama administration. In a 3-to-2 vote along partisan lines, the agency ruled that internet providers are no longer required to treat all internet content equally and can deliver some content faster than others. Ajit Pai, who was appointed to lead the FCC by President Donald Trump, said that the decision would encourage competition and spur innovation.

“I think it means better, faster, cheaper internet access,” he told Marketplace earlier this week. “If you talk to smaller providers in particular, and I’ve spoken to many of them from Minnesota to Montana over the past week, they have said that these heavy handed regulations stand in the way of them building a business case for deploying internet infrastructure, especially in rural and low income urban areas.”

Critics of the FCC’s decision worry that with net neutrality rules overturned large internet service providers like Comcast or Verizon could begin charging different rates for certain internet content or even begin selectively slowing down data delivery. Small businesses that depend on traffic to their websites and online sales are concerned that this might increase their costs and stifle competition — the opposite of what the FCC says it hopes would happen. Internet providers like AT&T, Comcast and Verizon have promised not to block and throttle content.

Here is what companies on both sides had to say about the FCC’s decision:

“The internet industry opposes Chairman Pai’s repeal of the 2015 Open Internet Order. Today’s vote represents a departure from more than a decade of broad, bipartisan consensus on the rules governing the internet. Relying on ISPs to live up to their own ‘promises’ is not net neutrality and is bad for consumers. Let’s remember why we have these rules in the first place. There is little competition in the broadband service market — more than half of all Americans have no choice in their provider — so consumers will be forced to accept ISP interference in their online experience. This is in stark contrast to the websites and apps that make up Internet Association, where competition is a click away and switching costs are low.

The fight isn’t over. Internet Association is currently weighing our legal options in a lawsuit against today’s Order, and remains open to Congress enshrining strong, enforceable net neutrality protections into law.”

We’re disappointed in the decision to gut #NetNeutrality protections that ushered in an unprecedented era of innovation, creativity & civic engagement. This is the beginning of a longer legal battle. Netflix stands w/ innovators, large & small, to oppose this misguided FCC order.

This isn’t only about Netflix. Without #NetNeutrality, we would never have been able to grow into the business we have today. There’s a whole future of startups that deserve that chance.

“It is disappointing that the FCC Chairman plowed ahead with his planned repeal despite all of this public concern, not to mention the objections expressed by his fellow commissioners, the FCC’s own CTO, more than a hundred members of Congress, dozens of senators, and the very builders of the modern internet. Nevertheless, today’s vote is the beginning, not the end. While the fight to preserve net neutrality is going to be longer than we had hoped, this is far from over.

Many of you have asked what comes next. We don’t exactly know yet, but it seems likely that the FCC’s decision will be challenged in court soon, and we would be supportive of that challenge. It’s also possible that Congress can decide to take up the cause and create strong, enforceable net neutrality rules that aren’t subject to the political winds at the FCC. Nevertheless, this will be a complex process that takes time. What is certain is that Reddit will continue to be involved in this issue in the way that we know best: seeking out every opportunity to amplify your voices and share them with those who have the power to make a difference.”

We have met with the @FCC ahead of today’s vote to continue our push for strong #NetNeutrality rules. Ensuring our customers can enjoy an open internet remains a top priority for Amazon.

Today’s misguided vote to gut #NetNeutrality protections is a blow to creativity, innovation, and free speech.

Congress can overturn this order. Hit up https://t.co/cQpx7nDCqc to learn how. pic.twitter.com/lSaDD6GWSA

It’s difficult to understand the rationale for a policy that will harm consumers, civil society and the most dynamic parts of our economy. We’ll all come to regret this. https://t.co/fqyKkoXhXA

“For more than a decade, under both Republican and Democratic Administrations, AT&T has consistently made clear that we provide broadband service in an open and transparent way.  We do not block websites, nor censor online content, nor throttle or degrade traffic based on the content, nor unfairly discriminate in our treatment of internet traffic. These principles, which were laid out in the FCC’s 2010 Open Internet Order and fully supported by AT&T, are clearly articulated on our website and are fully enforceable against us.  In short, the internet will continue to work tomorrow just as it always has.  Despite the existence and the enforce-ability of all of these commitments, we have, since 2010, also repeatedly called for a non-Title II legislative solution that would make these consumer protections permanent. We continue to support a legislative solution and will work with any interested members of Congress to achieve that solution.”

Hi Patrick. Comcast customers will continue to enjoy all of the benefits of an open Internet today, tomorrow, and in the future. Learn more here: https://t.co/JiRP3DZfWh. -Kim

“This is not the end of net neutrality.  Despite repeated distortions and biased information, as well as misguided, inaccurate attacks from detractors, our Internet service is not going to change.  Comcast customers will continue to enjoy all of the benefits of an open Internet today, tomorrow, and in the future.  Period.

Consumers will remain fully protected.  We have repeatedly stated, and reiterate today, that we do not and will not block, throttle, or discriminate against lawful content.  These fundamental tenets of net neutrality are also key components of our core network and business practices – they govern how we run our Internet business.”

“Today’s FCC vote to undo the 1930s rotary-phone era regulation of the internet will restore certainty to the private sector and encourage investment in the broadband infrastructure necessary to power emerging technologies that contribute to economic growth. The Restoring Internet Freedom Order passed today is simply a return to the regulatory framework that allowed for a thriving internet, before the FCC placed it under unnecessary public-utility-style treatment. While we don’t support Title II regulation of the internet, the U.S. Chamber strongly endorses net neutrality principles and the rights of consumers to access their favorite legal online content and websites. We encourage Congress to provide long-term regulatory certainty by enacting legislation that permanently preserves net neutrality and prevents federal agencies from stifling innovation through outdated and overly-burdensome regulatory regimes on our nation’s communications and technology industries.”