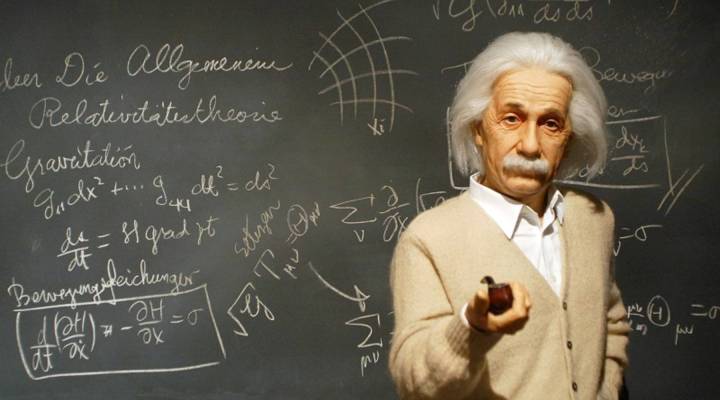 COPY
“Lost Einsteins” are a group of people, including minorities and women, who could have become successful innovators but didn't have the right opportunities to come through the innovation pipeline, says Raj Chetty, a Stanford economist. Above, a Seoul, South Korea, exhibit of physicist Albert Einstein. Photo by Chung Sung-Jun/Getty Images

“Lost Einsteins” are a group of people, including minorities and women, who could have become successful innovators but didn't have the right opportunities to come through the innovation pipeline, says Raj Chetty, a Stanford economist. Above, a Seoul, South Korea, exhibit of physicist Albert Einstein. Photo by Chung Sung-Jun/Getty Images
Listen Now

Innovation’s one of those economic buzzwords you hear constantly, so much so maybe that it loses some of its impact. But some new work from Stanford economist Raj Chetty about who gets to be innovative in this economy is pretty sobering. Chetty’s study, from the Equality of Opportunity Project, finds that women, minorities, people with lower incomes and people from certain regions are all less likely to become inventors. That matters, not just because it highlights a level of inequality, but also because it means that our country is missing out on discoveries that might have happened if those people had pursued careers as inventors. Marketplace host Kai Ryssdal talked to Chetty about his findings. The following is an edited transcript of their conversation.

Kai Ryssdal: This is going to sound like a basic question, but I need to start with you helping me understand why innovation matters in an economy.

Raj Chetty: Well, innovation is really the source of economic growth — the discovery of new technologies, discovery of new drugs, things that make our lives better, things that ultimately allow us to be much more productive. For example, computers or the internet or the industrial revolution. All of that is at the heart of why human beings today, in the U.S. and most other developed countries, live much better lives, much richer lives, much longer lives than they did in the past.

Ryssdal: And what we have here in this paper most recently from you and your colleagues is in essence the absence of innovation because of inequality, right?

Chetty: The paper is about what we call “lost Einsteins,” a large set of people who we think could have become highly impactful innovators, people who could have discovered the next iPhone, the next blockbuster drug. But because they didn’t have the right opportunities, the right background, because they were kids from minority families or low-income families or women, they ended up not coming through the innovation pipeline. And as a result, we have less innovation than we could.

Chetty: There are sharp geographic disparities, and what that goes to is one of the key explanations for why we see these lost Einsteins. It really seems to be about exposure to innovation while you’re growing up. So if you grow up in an area like Silicon Valley, for example, where there’s a lot of innovation going on, you’re much more likely to become an inventor yourself. In the South, what’s interesting is in general, we don’t see many kids that are growing up to become inventors. One exception to that is Austin, Texas, which as you know, especially recently, has really become a hub of innovation.

Ryssdal: And you did the regression analyses or whatever econometrics you did, and you segregated out for income levels and all of that stuff, right?

Chetty: Yeah, that’s exactly right. Let me give you a concrete example of how we do that. It’s actually quite simple. We look at the exact technology category in which people are innovating, and what you find is it’s not just that people innovate more when they grow up around inventors. It’s that the specific type of innovation they do is greatly influenced by who they grow up around. An additional dimension that I think is extremely important is that these effects vary by gender. So it turns out that women tend to patent in exactly the categories that the women around them were inventing. And so if you grew up in an area where women were innovating a lot in a particular technology, you’re more likely to do that yourself. Meanwhile, boys are much more influenced by men. So it’s a very particular pattern by gender as well in terms of exposure.

Ryssdal: So that’s where I was going to go actually. Let’s move on to the solution of this, right? Should we get more women into typically male fields? I mean, what is the answer, I guess is the question.

Chetty: Yeah, so our sense is if we could bring in this pool of women, kids from low-income families and minorities, we would have four times as much innovation in the U.S. as we currently do. So there are big stakes here. Now the question is, how do you actually go about doing that? What I think you really need is to change the environments, the childhood environments of these kids. And usually when people talk about childhood environment, they mean things like improving schools, improving neighborhoods, reducing segregation and things like that, and I think all of that could matter. But there’s also something much more specific here that I think could really matter, which is creating more opportunities for exposure to innovation for kids who are very talented, excelling in math and science at early ages. And then you have systematic programs to connect them with people from similar backgrounds who become mentors. I think you really need a role model that you can see yourself in that person’s shoes. That’s the type of program I think could be effective here if done at scale.