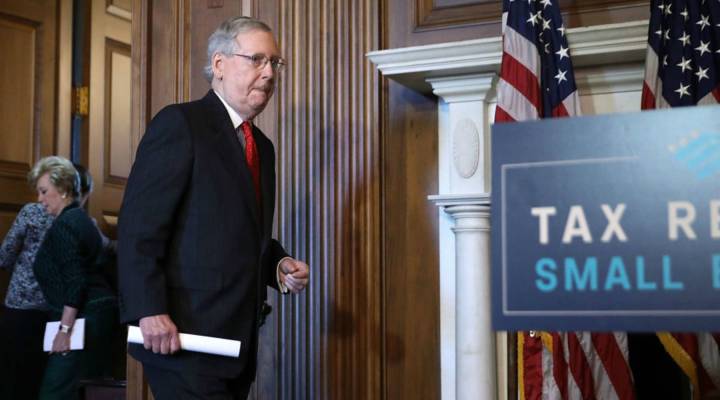 Now that the Republican majority in the Senate has passed its version of a controversial tax bill, a new process begins. And it could be just as complicated and byzantine: melding the two tax bills into one so it can pass both chambers of Congress and go on to President Donald Trump for his signature.

The House and Senate bills include a lot of the same tax code changes, but there are also differences. The House wants to reduce the number of tax brackets to four (12 percent, 25 percent, 35 percent and 39.6 percent for top earners), while the Senate would keep it at seven, our current number, albeit with some changes to the rates. The House wants to double the estate tax and then eventually phase it out, while the Senate would keep the estate tax and raise the threshold to $11 million.

“The only thing that’s required is that the House and the Senate pass a bill in identical form,” said Steven Smith, director of the Center on the Economy, Government and Public Policy at Washington University.

Smith said historically, getting to a single bill has been the job of a bipartisan conference committee.

But GOP leaders plan to pass this with only Republican votes. So the negotiations will happen between Republicans, said James Thurber at American University’s Center for Congressional and Presidential Studies.

“It could be a fait accompli, with the leaders deciding behind the scenes what would be in it, and then the conference committee would simply announce: ‘this is what we’ve agreed to,’” Thurber added.

But even that could prove too hard for Republicans, noted Norman Ornstein from the American Enterprise Institute. And that’ll leave them one other option:

“Just take the Senate bill and bring it up for a vote in the House. And have Speaker [Paul] Ryan tell his Republicans: ‘This is your last chance. Things here you don’t like — hold your nose and vote for it,’” he said.

If it passes, the tax overhaul would be the most sweeping since the 1980s.