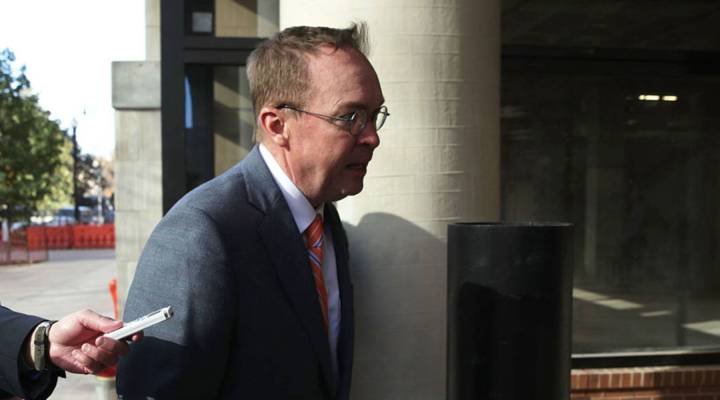 COPY
White House Budget Director Mick Mulvaney, President Donald Trump's pick for acting director of the Consumer Financial Protection Bureau, walks back to the White House from the CFPB building after he showed up for his first day of work today in Washington, D.C. Alex Wong/Getty Images

White House Budget Director Mick Mulvaney, President Donald Trump's pick for acting director of the Consumer Financial Protection Bureau, walks back to the White House from the CFPB building after he showed up for his first day of work today in Washington, D.C. Alex Wong/Getty Images
Listen Now

The Consumer Financial Protection Bureau, created in the wake of the financial crisis, is locked in a leadership struggle after its first director stepped down last week. President Donald Trump named an interim director, while a deputy director at the CFPB has sued in federal court, arguing that role is hers.

Meanwhile,  President Trump has been very public about his dislike for the CFPB — he tweeted this weekend that it was a “disaster” and said that “financial institutions have been devastated.” Mick Mulvaney, the White House budget director who President Trump tapped to warm the directors’ seat, has previously called the agency a “joke.”

“The CFPB in its short existence has been incredibly effective,” counters Rachel Weintraub, the legislative director and general counsel with Consumer Federation of America. “For example, it has obtained $12 billion in refunds to almost 30 million Americans who were harmed by a large financial institution.”

Diane Katz, with the Heritage Foundation, agrees the agency has been “extremely effective.”

“Whether that is a good thing or not is a different calculation,” she said. “But they have promulgated a great many rules, many of which have made consumer financial products and services more costly and harder to obtain.”

Despite President Trump’s dislike for the agency, neither he nor its new leader can simply shutter the CFPB. Katz said Congress imbued the CFPB with great power and independence, so only Congress could force real change at the agency.

She said rolling back existing CFPB rules is trickier and would take longer, but that’s also possible.

The long-term impact of these changes is still an open question, according to Andrew Metrick, a finance professor at the Yale School of Management. It’s still unclear whether a new leader could hollow out the agency, such that a later administration couldn’t simply undo all its changes once again.

“I don’t think it’s that easy, absent changing the statute, to have a long-term impact on the ability of the CFPB to do its job,” he said.

Nor does he think it will be “open season” for the companies regulated by the CFPB.

“I think they realize that unless the law changes significantly, anything they do over the next few years, they can still get in trouble for if there’s a different director five years from now.”