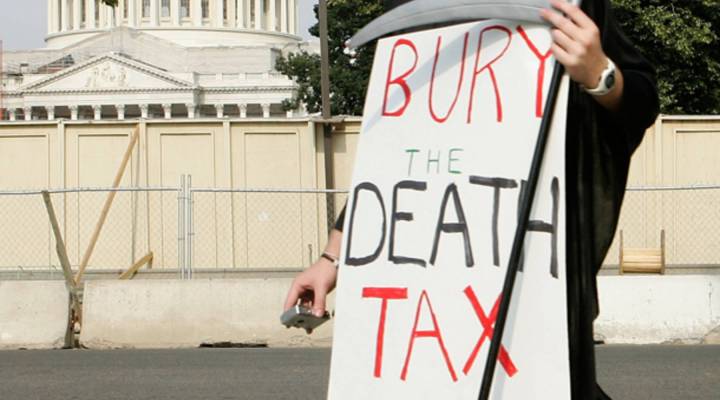 COPY
A member of College Republicans National Committee dresses as Grim Reaper as he marches on Capitol Hill to call on the Senate to eliminate the death tax June 8, 2006 in Washington, D.C. Alex Wong/Getty Images

A member of College Republicans National Committee dresses as Grim Reaper as he marches on Capitol Hill to call on the Senate to eliminate the death tax June 8, 2006 in Washington, D.C. Alex Wong/Getty Images
Listen Now

With the U.S. Congress determined to get tax reform done before the end of the year, one of the taxes on the chopping block is the estate tax. Up till now, if you had a lot of money —  more than $5.5 million for an individual or $11 million for a couple — and you wanted to leave it to your kids when you died, Uncle Sam would get a piece. And not a small piece: 40 percent.

If House Republicans have their way, in six years’ time, the estate tax will be a thing of a past. Their plan, which passed in a 227 to 205 vote last week, would also immediately increase the exemption threshold from $5.5 million to $11 million for individuals. The Senate bill, which has yet to come up for a vote, does not repeal the estate tax — often referred to as the death tax — but does raise the exemption to $11 million.

If Pete Bonds had his way, the estate tax would long be dead. Bonds owns Bonds Ranch, which raises cattle in nine states and is valued above the current $5.5 million threshold. That means that anything above that threshold will be taxed at 40 percent when he dies.

“It’s bad enough on my children that I die and now the government is going to tax that event,” Bonds said. “The way it makes me feel is that upon my death the kids will have to buy the ranch back from the government and that’s not fair.”

How you feel about the estate tax really depends on how you conceive of fairness. How fair is it, for example, to essentially tax heirs?

“It’s income sort-of lottery windfall for people and this is a tax on that windfall,” said Chuck Marr, director of federal tax policy at the Center on Budget and Policy Priorities. He said we tax lottery winnings and heirs won the lottery by being born. “The United States is not an aristocracy. We don’t want to have generation upon generation of assets to build up untaxed till you get these wealthy dynasties.”

Adam Michel, a policy analyst at the Heritage Foundation, said the estate tax is unfair for another reason.

“This is money the government has already taxed, often multiple times,” he points out.

“Roughly half of the money in wealthy estates has never been taxed before,” Marr said. That half consists of investments that have never been cashed out and, therefore, never taxed. Taxing that is pretty fair, according to Marr.

In any case, middle-class income earners are no strangers to double taxation, either.

“Middle-class people pay income and payroll taxes on every paycheck,” Marr said. “They get double taxed every two weeks.”

When the estate tax was created in 1916, the idea was to make sure the wealthy were paying something on their assets just like wage earners were. Opponents of the estate tax say these days it affects family businesses.

“There’s been several ranches that got broken up because they basically had to sell off part of the ranch to pay off the government,” he said.

But the data suggest this is extremely rare. Only about 5,000 households in the U.S. paid the estate tax in 2016. Of them, only about 50 were small businesses or farms, according to the Center on Budget and Policy Priorities. There are exemptions and special rules for farmers that mean, according to the U.S. Department of Agriculture, only 0.6 percent of farms have to pay an estate tax. For the families that do pay an estate tax, the tax rate on their entire wealth ends up being fairly low in reality.

Thanks to all kinds of deductions, exemptions and loopholes, it comes to about 16 to 18 cents on the dollar, Marr said.

Over the past two decades, Congress has dramatically reduced the level of the estate tax — from 55 percent to 40 percent — and the number of people it applies to. As a result, very few families end up paying it these days. But it does bring in nontrivial revenue. The cost of repealing the estate tax is projected to be $269 billion over the next decade, according to Steven Bank, professor of business law at UCLA law school.

“There’s actual money there,” he said. “We’d have to replace it.”

That’s a lot of money but not an enormous amount as taxes go. For example, in 2015, the IRS collected a total of $3.3 trillion in gross taxes. The estate tax for that year came in under $18 billion. Meaning it was just 0.5 percent of the collected total. Despite that, and the fact that not that many people pay it, the estate tax has an outsize presence in the debate over tax reform.