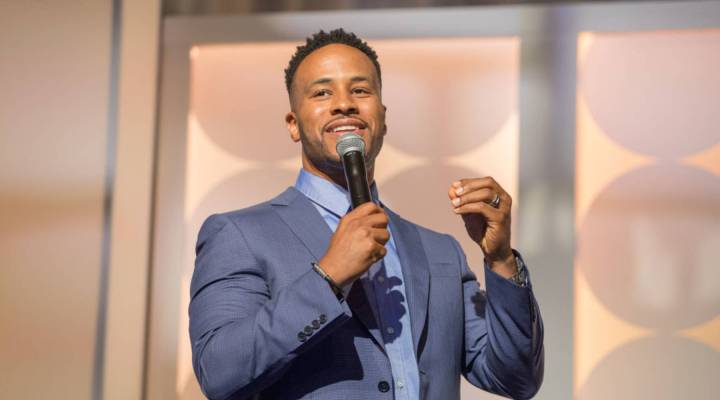 COPY
DeVon Franklin speaks during the MegaFest Leading Men In Hollywood Panel at the Omni Hotel on June 29, 2017 in Dallas, Texas. Photo by Rick Kern/Getty Images for MegaFest 2017

DeVon Franklin speaks during the MegaFest Leading Men In Hollywood Panel at the Omni Hotel on June 29, 2017 in Dallas, Texas. Photo by Rick Kern/Getty Images for MegaFest 2017
Listen Now

You may not have heard of him unless you’re a Hollywood insider, but DeVon Franklin, the CEO and founder of Franklin Entertainment, is arguably the person behind wide-release Christian films. During his ten years at Sony, he helped make a series of hit faith films: “Jumping the Broom,” “Heaven is For Real,” and “Miracles from Heaven.” His latest projects include an animated retelling of the Nativity called “The Star,” and a book called “The Hollywood Commandments.”

Franklin sat down with Marketplace host Kai Ryssdal to talk about his career and foray into the Christian film industry. The following is an edited transcript of their interview.

Kai Ryssdal: There’s a whole lot to talk about with you and the book and the movie and all of that, but I want to I want to lean right into who you are in this place. You say in this book that the church didn’t necessarily teach you to be successful, Hollywood did.

Franklin: I know that that line alone probably has got me uninvited to some churches. What I mean by that is that the church is not a one-stop-shop. So when it comes to practically learning how to be successful learn how to deal with difficult people learning how to negotiate learning how to make films. I didn’t learn those things in the church. I learned that in Hollywood. So I say that Hollywood made me successful [and] the church didn’t as a way to let people know that too often we try to say “Oh it has to be everything spiritual, everything has to be secular.” I’m saying no, I believe it’s a combination of both. And in my experience as a spiritual person, it was the secular world that taught me the most that I’ve learned, to date, about success.

Ryssdal: This will irritate perhaps you, and perhaps some listeners, but it cannot have escaped your notice that you developed your professional skills— I don’t want to call Hollywood a godless place, but it’s a place that is hedonistic, and driven by profit, and manna, and all that jazz, which does not necessarily line up with a lot of the Christian and spiritual things that you talk about in this book, and in your life, right?

Franklin: But that’s the beauty of it, right? I think too often we put a requirement on an environment that is not what the environment’s supposed to do. Right? Hollywood, to a degree, is democratic. Hollywood is agnostic. If you are a spiritual person, and you’re going into the world, right, you’re going into secular environments that do not profess to hold your belief system. You are there to say, OK, if you’re being called to an industry, it’s how you navigate that industry, not how you allow that industry navigate you.

Ryssdal: What you just said, called to an industry.

Ryssdal: You believe you were called to Hollywood.

Franklin: What I mean is that I feel like this is a part of my purpose. You know, I lost my father at the age of 9 from a heart attack, when he died at 36. And my mom didn’t have money for therapy. So it was church, and it was entertainment, it was Hollywood, that kind of helped me heal. And I really felt like, well, I want to be a part of the industry because if this industry can have this type of impact on me, then I want to be a part of an industry that can actually do that for others. So that was the goal. And when I’ve seen things kind of transpire in my 20-year career in Hollywood, I do believe there’s—

Ryssdal: Twenty years! How old are you. Get out of here.

Ryssdal: Get out of here. Wow.

Ryssdal: I want to talk about this “making change” thing, because the idea of the Christian slice of the entertainment industry is— it’s not new, but it’s nascent, I think, is a good word for it. Right? Did you come here with with the intent of building that market?

Franklin: No. Not even a little bit. It wasn’t until I became an executive at Sony in 2005. The first movie I worked on was “Pursuit of Happyness.” The movie was so inspirational and so powerful. I just said, this movie is going to speak to people of faith because I’m a person of faith that is speaking to me. And so I put together a whole marketing and publicity campaign on how to take the message of faith to the faith-based audience. The film ended up making $160 million.

Ryssdal: Yeah, a boatload of money.

Franklin: Huge. But what it showed me was like, oh wow, I can merge my my passions here. And I didn’t know that until that moment. It was never clear to me. And then from there, did other films like “Not Easily Broken,” “Jumping the Broom,” “Sparkle,” and then ultimately “Heaven Is For Real,” which opened up the door for me to start Franklin Entertainment.

Ryssdal: “Heaven is for Real” does quite well. You have a conversation with Amy Pascal in which you say “This was great, but I’ve got to go.”

Ryssdal: Tell me about that.

Franklin: In that moment, man, you know, people think I was crazy. But like, I can’t make movies of faith if I’m not living by faith. And so, Amy had e-mailed me that weekend. I got in the meeting, and she’s like oh, you know, what are we going to do next, and we want to promote you, want to give you more money. And I said, nope. I said I quit. Because I knew that there was an opportunity. Because in Hollywood, whenever you have a hit, you now have some equity that you can spend, and you got to figure out what you want to use it on. And for me, I said now’s the time. So I said I’m quitting, and I want to start Franklin Entertainment, and I want you to fund it. And she looked at me, and she was like, OK. All right. And what I love about the story, and why I share the anecdote was, it took me months and months to negotiate the deal. And just about as soon as we’re done negotiating the deal, the Sony computers got hacked. And all the information, you know, got out, and as a result, Amy lost her job. And so I share that anecdote to say that, you know, there are sometimes we have to move when we have that feeling. It doesn’t quite make sense.

Ryssdal: Because if you had waited, man, forget it, right?

Franklin: If I’d waited, then forget it. Because the negotiation would’ve got caught up in the hack, and it would have been done.

Ryssdal: You are obviously very upfront about your faith, both personally and professionally. Do you get pushback ever on that from people in your professional life?

Ryssdal: You’re like, I just want to make movies, man, leave me alone.

Franklin: No. Not in my professional life. In my spiritual life, I get pushback.

Ryssdal: Is that right? So the spiritual life pushes back against you being part of Hollywood.

Franklin: Yeah they do. They do. I mean, but what’s weird is that, and I talk about this in my in my book, “The Hollywood Commandments.” You know, Hollywood is a place that embraces difference, even more readily than the church. The favorite color of Hollywood is green. Period. So if you’re if you’re talented, if you have purple hair, if you have a different belief system, but you can use that talent to create profit.

Ryssdal: It goes to what you said. You make a hit movie, you’ve got a lot of equity. You’ve got lots of capital.

Franklin: So Hollywood in, that way, is very agnostic. Whereas the church, you know, criticizes me a lot, say, well certain segments of the church. Oh, you know, well you’re just too secular. But I say, you know, listen, if Jesus said, you know, be in the world, right? Not of it. Be in it. So I have to be in what I’m doing if I ever have a chance, or desire, to want to impact it.