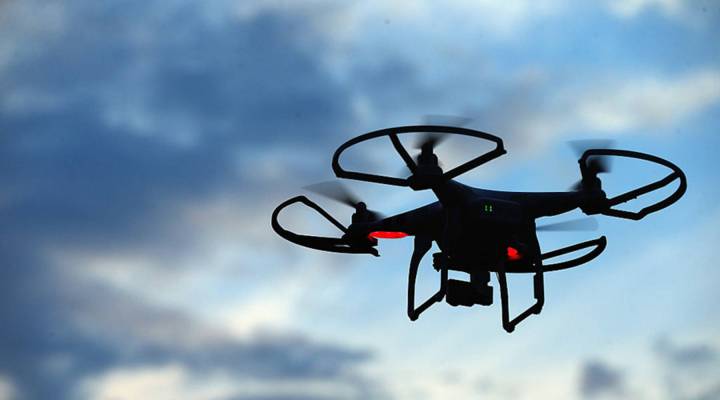 COPY
The spy in the sky. Bruce Bennett/Getty Images

The spy in the sky. Bruce Bennett/Getty Images
Listen Now

On a quiet road next to the busy Bordeaux beltway, a huddle of policemen watch as a drone climbs into the sky to fix its glass eye on the main road. On the ground, police captain Pascal Gensous scrutinizes the images it sends down to the monitor.

“The drone is very useful because we can see dangerous drivers on the roads without being seen by them,” he said.

Police in the Bordeaux area of Southwest France are pioneering the use of drones to catch drivers violating traffic laws. They started in summer and have already issued hundreds of fines thanks to the spy in the sky.

It is also a lot cheaper than helicopter surveillance that the police sometimes use to nab traffic offenders. The drone has a clear view of the traffic but the police are hidden behind trees. Today, they are going after truckers. They’re watching out for dangerous behavior, like driving too close to the vehicle in front or illegal passing. The police don’t have to wait long.

“A white truck with red and black letters on the side. Illegal passing,” said Gensous into his walkie-talkie.

Motorcycle cops, waiting down the road from the drone zone, receive the description and move to intercept, flagging down the guilty truck and escorting it to a shoulder where a third group of police are waiting to ticket them and receive on-the-spot fines.

“This kind of operation today we can stop from 15 to 20 trucks in an hour,” Gensous said.

Drone surveillance does have one limitation. Although it can show dangerous driving — cars zigzagging through traffic for example — it is not suitable to detect speeding.

Government officials in charge of road safety said punitive measures are needed to change driver behavior. But some drivers are unhappy. Speed cameras already earn the French government three-quarters of a billion dollars a year in fines. For Pierre Chasseray of the lobby group Forty Million Drivers, using drones against drivers is an unwelcome escalation.

“Just think, instead of encouraging drivers to keep their eyes on the road, we now have to look at the side of the road for speed cameras and now in the air for drones,” he said.

The government, in any case, likes the look of the Bordeaux drone experiment. It said it intends to purchase more drones in order to bring similar traffic surveillance operations to other parts of the country.