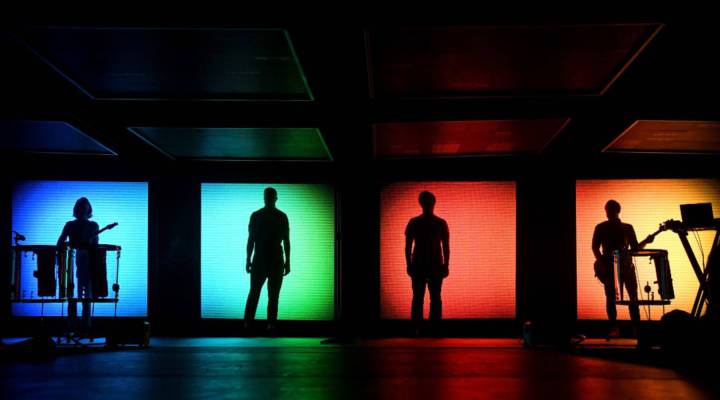 Grammy Award-winning band Imagine Dragons, most commonly known for its 2014 single “Radioactive,” has sold over 3.9 million albums and 24 million tracks since its debut album release in 2012. With three studio albums under its belt, including “Evolve,” which debuted in June, Imagine Dragons is currently on the North American leg of an international tour. Frontman Dan Reynolds and bassist Ben McKee recently visited Marketplace Weekend, took our Marketplace Quiz and dished over serial killers, greasy diner food and idyllic thoughts.

Dan Reynolds: So Ben, fill in the blank: Money can’t buy you happiness, but it can buy you ____?

Ben McKee: I’m going to go with it can buy you a moment’s respite from everything, but it gets all crazy. You can find a way to, you know, send your dog off to the kennel and go get a massage for a moment when everything gets a little too loud and crazy.

McKee: Well Dan, in a future life, if you could do it all over again, what would your career be?

Reynolds:I thought quite a bit about this actually. This is going to sound really dark, and I’m sorry, but I’m trying to be very honest. I’ve always been really fascinated with murder cases.

McKee: So, a serial killer?

Reynolds: Exactly. No, I’d like to get involved in some sort of homicide, a detective role to some degree. I’m not looking to use a gun. I don’t think I could ever fire a gun at someone or take someone’s life. I think that sounds too overwhelming for me, but the thought of helping a family or helping someone who has a loved one that has lost their life, to kind of figure out what happened there. I know it sounds like a 14-year-old-boy, you know, but I’m kind of a 14-year-old boy in a 30-year-old’s body. So I think that would be fascinating.

McKee: I think that I could be happy with a career as a park ranger, something like that. You know, being very isolated and being in touch with nature. That’s, I think, where I feel most centered when I’m not on the road, is when I’m by myself in a grove of redwoods and spending some more time with that would be a welcome thing in my life.

Reynolds: I could see you being a really great park ranger.

McKee: Yeah. Got to protect the squirrels.

Reynolds: OK, Ben, what is the hardest part about your job that no one knows?

McKee: I think probably one of the hardest parts is just not having that idea of stability in your life. You sort of have to expect the unexpected and accept the huge lifestyle changes on a moment’s notice and just move beyond that and roll with the punches.

McKee: What about you Dan?

Reynolds: Maintaining the ability to sing that much, especially with Imagine Dragons, it’s just a lot of dynamic singing. It gets really difficult. And I also have two autoimmune diseases. I have ankylosing spondylitis and ulcerative colitis. I have to go on a super strict diet on the road. Basically, I eat vegetables and fish and chicken. For some people, I know that they already choose that diet on their own, but for me, I have a hard time.

Reynolds: So Ben, what is something you bought that you now completely regret buying?

McKee: Well, not being on an anti-inflammatory diet like Dan, as soon as we got done with our 15-hour bus ride yesterday, I ran into the nearest diner and got a Juicy Lucy, the famous Minneapolis hamburger with the cheese on the inside. Also some Parmesan cheese Tater Tots and some BBQ chicken nachos. And I haven’t decided which one of those I regret, but certainly all three was too much.

Reynolds: That sounds so good to me right now.

McKee: When did you first realize that music could be an actual career for you?

Reynolds: I don’t know if I’ve ever had a full realization of that. I feel like as a musician, you’re always thinking, “Tomorrow everything’s going to just collapse” and that’s kind of the drive that keeps you going.

Reynolds: Ben, what is your most prized possession?

Reynolds: Well, I think the obvious answer would be to say my children, but I think you wanna hear that.

McKee: I don’t know if I’d call children a possession.

Reynolds: I know, I was getting to that. I was going to say that they’re probably not possession. That being said, probably my ’67 Mustang.

Reynolds: Ben, what was your very first job?

McKee: My very first job was helping my dad haul concrete hoses out in the muddy hills of Northern California.

Reynolds: I suppose that’s because it was construction.

McKee: You know, you’d be done before your friends were waking up and have a little money in my pocket.

McKee: How about you Dan? What was your very first job?

Reynolds: OK, Ben, what is something everyone should own, no matter the cost?

McKee: I think that everybody should own a comfortable pair of shoes. I think that going through life every day, you’re a little bit happier if your feet are well taken care of.

McKee: Dan, what do you think is something that everybody should own, no matter the cost?

Reynolds: This is such a cliche answer, but it’s the honest answer: a home. A place of refuge to get away from everything in the world and to actually have solace and peace. So I’d say, everybody deserves to have a roof over their head — a house.

Reynolds: OK, Ben, this is the final question.

Reynolds: Red alert, red alert. Final question: What advice do you wish someone had given you before you started your career?

McKee: I kinda wish somebody had told me to not be afraid to make choices that will lead to your own happiness.