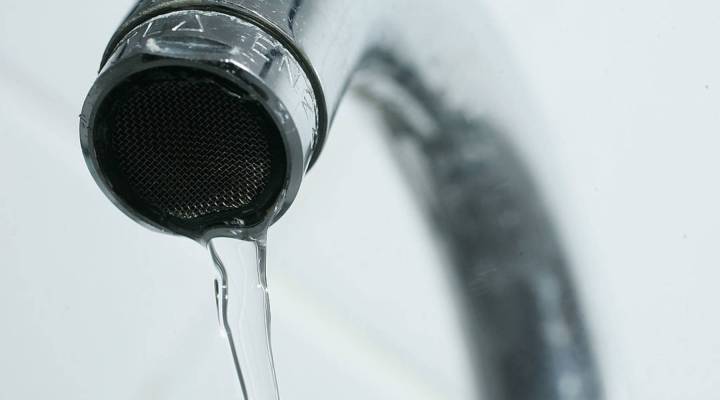 COPY
One study found that mobile home park residents are more than three times as likely as others to  experience at least one water outage a year.  Sean Gallup/Getty Images

One study found that mobile home park residents are more than three times as likely as others to  experience at least one water outage a year.  Sean Gallup/Getty Images
Listen Now

Imagine you wake up and go to get in the shower, or brush your teeth, and there’s nothing coming out of the tap. Imagine this happens with no notice, and sometimes goes on for days. Well, this scenario is real — and we’re not talking about Flint or any city water system. It turns out mobile home parks across the country have problems with unreliable water.

In a rural area outside Dayton, Ohio, a park called Pineview Estates has had intermittent water service for years. Pineview is just a couple hundred trailers amidst cornfields not far from Interstate 75 — a quiet, but convenient place.

Seated in her comfy chair at home, a resident named Jeri Reynolds said she’s lived at the park for more than 25 years.

“This was a real nice trailer park back then,” she said, “like something in a magazine.”

These days, it’s routine for her to wake up in the morning to find there’s nothing coming out of the tap. “You just get up and it’s off,” she said. Residents receive no notice, and never know when the water will come back on. “You know, it’s disgusting. When you can’t take a shower, you can’t flush your toilet. You can’t do nothing. It’s getting bad.”

Reynolds and her neighbors usually don’t even learn why their water is off. Sometimes it’s as simple as a broken water main that takes days to fix,  and sometimes the water comes out brown, or they get boil alerts taped to the door. Basically it’s an old system that just hasn’t been updated — Ohio Environmental Protection Agency (EPA) documents show years of citations for small problems with the water system.

Jeri Reynolds owns her trailer, but like most mobile home park residents she pays rent for the plot of land it’s on—it’s the landlord who manages the small well water system. Tenants say they don’t even know how to reach that landlord, Timothy Dearwester, and  onsite manager was unwilling to talk or share a contact number. Dearwester also didn’t return messages left with the lawyer for Pineview Estates, and with his father.

This isn’t necessarily an issue of water quality—it’s simply a matter of the landlord’s obligation to keep the water coming out of the tap and keep the system up to date. A quick trip to Google reveals dozens stories about mobile home residents being forced to use bottled water from Louisiana to California over just the last couple years.

A researcher named Silvia Gonzalez, a Ph.D student in urban planning and former assistant director of the school’s Center for the Study of Inequality at UCLA, noticed the trend.

“I was running the data, and I kept seeing that mobile homes kept popping up and popping up as having multiple violations, so I was really intrigued,” she said.

She and colleague Gregory Pierce analyzed census data on mobile homes and water cutoffs, and published a paper last year. They found mobile home park residents are more than three times as likely as others to experience at least one water outage a year, even when you control for factors like race and income.

Gonzalez said regulations and responses for these smaller water systems are all over the place — states and counties deal with enforcement differently, and sometimes not at all.

“The way that our water policies are structured … I wouldn’t say they’re structured actually,” she said. “I would say that they’re very fragmented.”

At Pineview Estates, the Ohio EPA has jurisdiction, and has been going back and forth with the owner for years, issuing warnings and demanding fines.

Dina Pierce with Ohio EPA said that after the state’s attorney general filed a lawsuit  (and a judge granted a restraining order), Dearwester did sign something agreeing to hire a water engineer and fix the problems. “We are doing everything we can within the regulatory framework to make sure that happens,” Pierce said.

But even after the landlord signed the agreement, the water was off again, with no notice. Everyone woke up to four gallons per trailer of bottled water, left on their porches late at night — providing four gallons of water a day was in the legal agreement. For perspective, the average American uses 80-100 gallons per day.

After the state of Ohio filed a lawsuit, the owner of Pineview Estates agreed to bring four gallons of water per trailer each day the water is shut off.

Finding good water in southern Dayton should be easy: Pineview Estates is right next to a river and right on top of an abundant underground aquifer.  It’s the water system, the human-made part, that’s the problem.

Jeri Reynolds said most people here are just trying to get out. “

There’s five empty trailers across the street,” she said. She doesn’t want to leave; she put a lot of money into this trailer, and she said she has health problems. “I hope somebody can help us, we need it. We really do.”