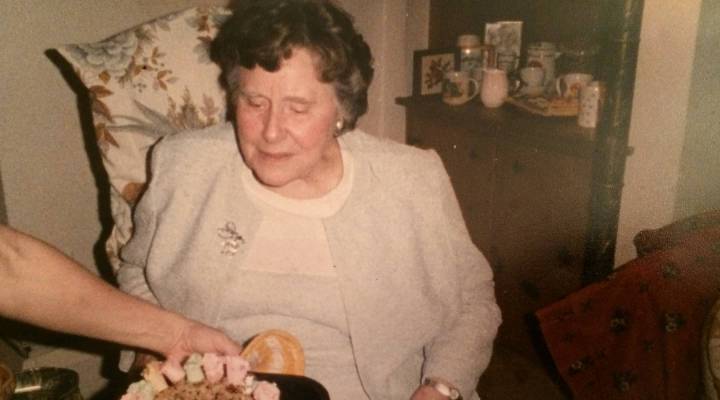 Reining in federal regulation has been on lawmakers minds for decades. President Donald Trump and Republicans in Congress are just the latest to promise economic growth through deregulation.

But how did we become a regulatory state in the first place? On this season of “The Uncertain Hour,” we traced it back to Ruth Desmond, a D.C.-area homemaker turned powerful consumer activist. By the 1970s she was the so-called Peanut Butter Grandma, the Terror of Washington who “spit in the corporate eye.”

Desmond died in 1988, but we spoke with her daughter, Janet Swauger. Swauger was close with her mother, and at 76, she still lives in the Arlington, Virginia, house where she grew up.

“My father always said he’d know that Mother was ready to do him in if she served him a meal out of a box,” Swauger told us, sitting in her mother’s old kitchen.

And that was only kind of a joke. Desmond saw food and cooking as matters of life and death, and she took health seriously. Her husband and Swauger’s father, Gordon, was diagnosed with bladder cancer in 1955. He was young, in his 40s.

He was in and out of the hospital for surgery. Before one surgery, Swauger remembers the doctors talking about the general anesthesia they were going to use when Desmond intervened.

Desmond explained her husband had a bad reaction to anesthesia in a previous surgery — his heart stopped — and she requested a spinal block instead. The doctors ignored her.

“So she actually rode the gurney into the surgical room, laying across his body,” Swauger said. “That’s the kind of person she was, she was determined. … That was how she looked at everything.”

Including food. Surgery got most of the cancer, but Desmond started reading up on carcinogens in food, and the effects of additives and pesticide residue.

She found studies that linked new chemical additives to cancer in lab animals. Desmond started wondering how safe the food in her kitchen was. More importantly, she wondered who was supposed to be in charge of figuring out what was safe.

“At that point — and I think this is so Ruth Desmond — she calls the FDA,” said Angie Boyce, a bioethicist at Johns Hopkins who’s written about Desmond. “And they tell her ‘Well, if you’re interested in this … why don’t you attend this hearing we’re gonna have on food additives?’”

Desmond learned food was in the middle of a radical transformation, and the Food and Drug Administration was trying to sort it all out.

“During World War II, the food science industry went to work and totally changed the American food supply because they were making food to feed our troops all over the world,” Peter Hutt said. He teaches food and drug law at Harvard. Since the ’60s, he’s been a lawyer for some of the biggest food companies around.

When the war ended, two of the biggest industries left standing in America were chemicals and food, ushering in a new era of processed food and preservatives.

“Honestly, no one knew if they were safe or not,” said FDA historian Suzanne Junod.

Things came to a head in the fall of 1959. Just before Thanksgiving, the FDA said it found a crop of cranberries contaminated with a weed killer. Federal regulations said farmers were supposed to spray the chemical well before harvest, but apparently some bogs were sprayed too late.

The government said if you don’t know where your cranberries came from, you should keep them off the Thanksgiving table. The nation freaked out.

Desmond had thought it was good enough to make her cranberry jam from scratch.

“Then you find out what they’ve done to the food before it even gets to the grocery store,” Swauger remembered. “She said, ‘Oh, my God. I’m killing my husband when I think I’m trying to help him.’”

Growers argued that people would have to eat carloads of cranberries for the pesticide residue to do any harm. They hanged an FDA official in effigy. Presidential candidates Richard Nixon and John Kennedy made a big show of eating cranberries. But while Americans were cursing the FDA, Desmond was cheering.

By that time she’d co-founded the Federation of Homemakers. The new group spoke out, defending the regulations and condemning the berry industry.

For Desmond, it was an early win, and just a dress rehearsal for a much bigger fight over peanut butter.

That’s what we’ll be exploring the first part of this season on The Uncertain Hour. Hear even more about Desmond in our first episode, and subscribe to keep up all season long.