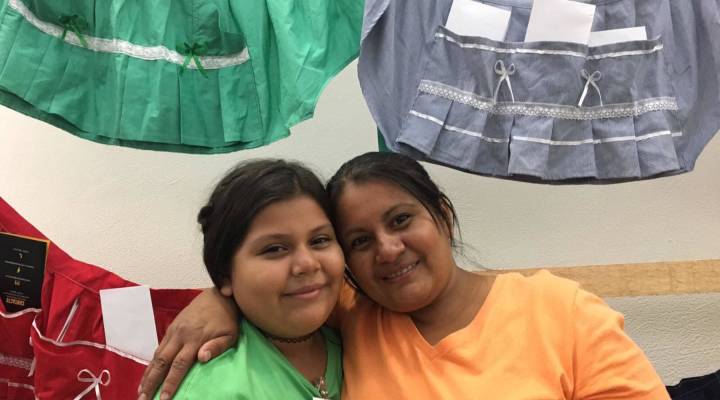 It’s a Thursday evening at a theater in El Salvador’s capital, San Salvador. As the performers of La Cachada Teatro prepare to take the stage, the audience is told to keep an open mind — and an open heart.

Six years ago, the actress and director Egly Larreynaga convinced five single mothers from the poorest and most violent neighborhoods of San Salvador to tell frank stories about their lives. At this performance, the crowd is mostly people from El Salvador’s middle and upper-middle classes. La Cachada — slang for a “special opportunity, a bargain” — brings this audience a dose of a reality far removed from their everyday lives.

El Salvador has some of the highest rates of violence against women in the world. The stories of the actresses reflect this reality. And as the performers of La Cachada share their experiences of abuse, the mood changes.

“Why did you have me?” the daughter asks.

“I gave birth to you because I was raped, and I was afraid to terminate the pregnancy and go to jail for 30 years,” the mother says. In the audience, no one’s laughing.

One of the actresses of La Cachada is Wendy Hernández. She lives in Mejicanos, San Salvador’s most dangerous neighborhood. It’s very different from the area where she performed. Hernández’s home is just big enough for a stove and a double bed, where she sleeps with her two children.

When she’s not performing, Hernández sells fruit and tortillas on the streets of San Salvador for $10 to $15 a day. When she performs with La Cachada, Hernández earns up to $50 a night.

“I really like selling in the streets. I manage my own time, but it’s hard because some days I don’t make any money,” Hernández said.

When La Cachada started, all the women were street vendors. Most now work as maids in the houses of people who watched their plays and offered them better jobs. These women said the theater is the cachada, the chance, of their lives. And they want to open the minds of the people watching their plays.

A study conducted by the University of Technology of El Salvador found that more than half of all Salvadoran women say they’ve suffered some form of abuse at the hand of parents, boyfriends, husbands and even nurses at public hospitals, like one of the scenes from the play shows.

Laura Aguirre, a Salvadoran researcher on sexual violence, thinks the women of La Cachada are raising the bar.

“They forced themselves to go back to their stories of violence, to understand them and explain them in a different way,” Aguirre said.

One may be Gabi Hernández. She’s only 10, but said she has seen her mother change over the last six years since joining La Cachada.

“Before, we didn’t use to go out, and we complained to her about that. Now we go out a little bit,” Gabi said.

Financially, Wendy Hernández is a bit more stable than she was six years ago when she started with La Cachada. But most importantly, she said the theater changed her relationship with her children. She has honest conversations with the kids now, including conversations about money.

Seeing the possibilities that opened up for her mother, Gabi is feeling inspired to follow her own dreams.

“I feel I can move forward and finish my education. I would like to be a doctor one day,” Gabi said.

Reporting for this story was supported by the International Women’s Media Foundation as part of its Adelante Latin America Reporting Initiative.