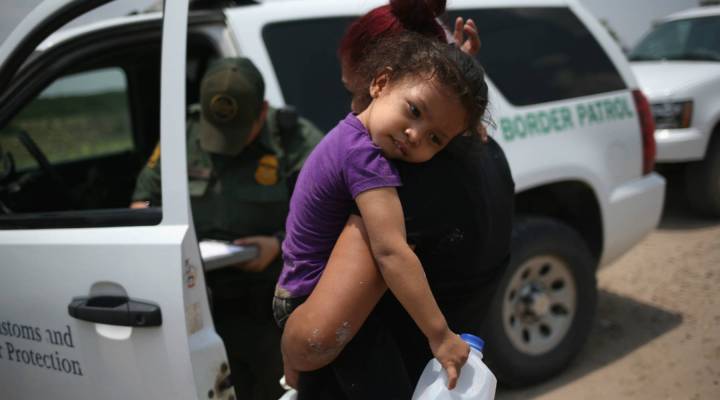 A mother and child, 3, from El Salvador await transport to a processing center for undocumented immigrants after they crossed the Rio Grande into the United States in Mission, Texas.  John Moore/Getty Images

A mother and child, 3, from El Salvador await transport to a processing center for undocumented immigrants after they crossed the Rio Grande into the United States in Mission, Texas.  John Moore/Getty Images

SAN SEBASTIAN SALITRILLO, El Salvador (AP) — Every two weeks, Flor Tovar receives a lifeline in the form of cash wired from her husband living in the United States.

The money pays the $50 rent for her modest two-bedroom home in a low-income housing development about an hour northwest of El Salvador’s capital. It also covers school transportation for their two sons, the electricity, water and cable television.

Now a decision made in Washington to end temporary protected status for her husband and nearly 200,000 other Salvadorans in the U.S. has the 33-year-old Tovar and her sons wondering what a future without that income would look like. Salvadorans with the status have been given until Sept. 9, 2019, to leave the United States or face deportation.

“It is very worrisome. These people don’t have the resources to come back, and the crime is terrible here,” Tovar said Tuesday.

The change would affect only a fraction of the estimated 2 million Salvadorans living the United States. But the effects could be devastating for families like Tovar’s who depend on the money sent home by relatives.

The Trump administration has left the door open for Congress to find a legislative solution that would allow those Salvadorans to remain in the country. Salvadorans living under the temporary protected status received it because earthquakes in 2001 made it difficult for them to return to their country. But Homeland Security Secretary Kirstjen Nielsen announced Monday that the U.S. has determined that the effects of those quakes are no longer a hurdle to returning.

Salvadorans transferred more than $4.5 billion from the U.S. in 2016, accounting for 17 percent of El Salvador’s economy, according to government figures. From January to November 2017, remittances were running about 10 percent above the same period the previous year. A government survey in 2016 determined that 382,734 households in El Salvador received remittances from abroad.

Tovar said that during his years in the U.S. her husband, Elias Colocho, established another family. But they remain on good terms and he continues to send money and speaks regularly with their sons. He works in construction in Richmond, Virginia, and makes a good living. In El Salvador he had worked at a bakery.

“Here there is no work, and if there is, the most you earn is $5 a day,” she said. “He has to take care of a family that he has here and the family he has in Virginia, another woman and two kids. If they come here you think he’s going to be able to support two families?”

Tovar does not work and worries what will happen to her sons aged 12 and 10. They are nearing the age when gangs start to recruit. The gangs are omnipresent and she doesn’t let her sons go anywhere without her. Even so, gangsters question them in the street about where they live and ask them to lift their shirts to see if they have tattoos.

Elias, Tovar’s eldest, realizes what is at stake. He said that if his father has to come back they won’t have the money they have now.

“He told me that he could come soon, that next year he is going to come if he can’t get his immigration papers sorted out,” Elias said.

Before the Trump administration’s announcement, Tovar and her husband had been thinking about sending the sons to the U.S. for their safety. “But now that is not going to be possible,” she said.

“I’m uncertain, devastated, worried,” Tovar said. “I don’t know what future awaits my sons. I had dreamed that they would live in the United States, but now that’s not going to be possible.”