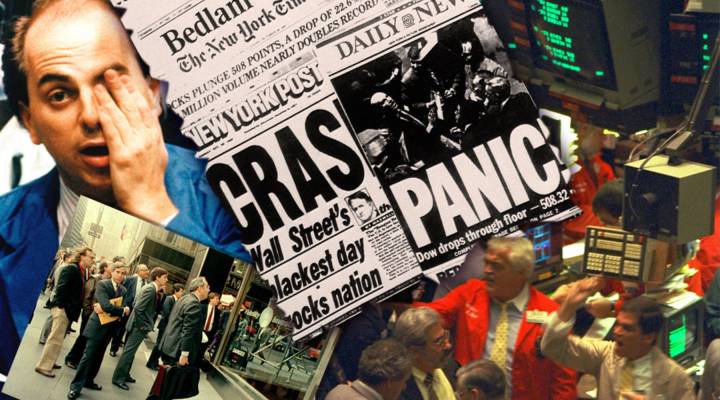 Thirty years ago this week, the Dow Jones suffered its biggest one day percentage loss ever — almost 23 percent of its value in just six and a half hours.

On Black Monday, Kenneth Polcari, now a managing director at O’Neil Securities, was a rookie trader on the New York Stock Exchange. The market “just went down, and down. It just never came up for air,” said Polcari, “Johnson & Johnson lost nearly 50 percent of its value in six and half hours.”

Today, people still don’t know what triggered the crash, but portfolio insurance – a popular 1980’s investment strategy that used computer algorithm to minimize risk–is blamed for the steep sell off on October 19, 1987.

“As the prices got worse, what happened? The portfolio insurance ran it through its risk management software and the computer spit out another message, ‘Sell more!’” said  Polcari.

According to the author of “A First Class Catastrophe,” Diana Henriques, “portfolio insurance helped lure institutional investors, like pension funds, into equities.”  But when the prices were falling that Monday in 1987, Henriques said it turned out “there was nobody to buy. Everyone was selling.”

Although the algorithm fell out of favor after the crash, it took almost two years for the market to make up its losses. Karen Shaw Petrou, a co-founder of the consulting firm Federal Financial Analytics, believes there’s a lesson to be learned, “When you have new technology that is ill understood, both by traders and regulators, it’s dangerous. It’s like giving a six-year-old boy a Ferrari. It’s really not a good idea.”

Yet, even now, we may not recognize the next fast cars of finance unless they are revealed in a market crash.

For more about the 1987 crash and what it says about today’s markets, check out the WNYC series Crash Course.