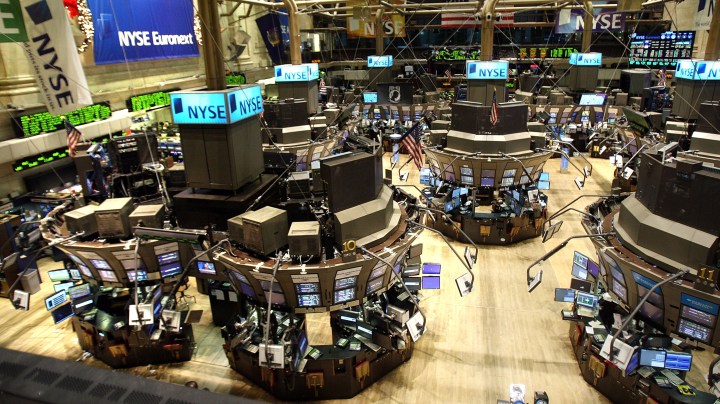 You can’t sit down at a restaurant after it’s closed for the day. You can’t buy carrots at the farmers market after the vendors go home. But when stock markets close at 4 p.m. Eastern, the trading continues.

After-hours trading lasts for several hours — typically until 8 p.m. in New York, depending on the exchange. Companies often release news during that window, letting investors use after-hours exchanges to trade on it without waiting for exchanges to turn the lights back on.

For instance, when Apple announced the departure of its chief design officer after the bell, shares dropped by 1% in extended-hours trading, erasing nearly $9 billion of the company’s market value.

Pull up Nasdaq’s website and you can even watch after-hours trades roll in.

Georgetown University finance professor James Angel and I connected on Skype at about 5 p.m. Eastern time on a Monday evening — markets had been closed for an hour. We pulled up the Nasdaq website and watched Facebook shares in after-hours trading.

But then two huge trades came in for 300,000 Facebook shares a piece. We can’t tell who made those trades, but given their size, Angel said it’s probably an institutional trade — likely a mutual fund or a pension fund.

“Somebody was eager to get that trade done today,” Angel said.

It used to be a lot harder to trade once markets closed. Then, in the ’80s, a brokerage called Instinet launched an electronic exchange that let big institutions such as mutual funds trade with each other in the evening. By the late 1990s, trading platforms like E-Trade came along and reduced barriers for regular investors, too.

But despite the ease and availability of after-hours markets, the real action is still during the normal trading day.

“Anybody can trade after hours,” Angel said. “The reality is very few people do.”

The day Angel and I were watching Facebook stock, investors had traded 15 million shares when markets were open. By the time we pulled up the list of after-hours trades, just a few hundred thousand shares had moved around.

Hilary Kramer at Kramer Capital Research said there might have been more trading if Facebook had announced something big after the closing bell — say, a pending lawsuit or a slowdown in subscriber growth.

Researchers have studied this and found that managers strategically use the after-hours session to release bad news since most traders aren’t paying attention.

In fact, a lot of managers wait until Friday night to announce this stuff.

Researchers also found that when bad news comes out during the late session, stocks don’t drop by as much as they normally would.

Kramer said she uses the after-hours market to get a jump-start on trading, but it can be risky for amateurs.

“It’s something not to be fooled around with,” Kramer said. “There’s a lot of money to be lost by going extended hours versus standard market hours.”

The lack of trading volume increases the spread between the price buyers are willing to pay and the price sellers are willing to take. Plus, the fact that so few people are trading in the after-hours session means that markets can swing around by a lot.

Cavanaugh basically advises investment advisers, who have clients on the other line. She said clients tend to act impulsively when they see big market movements on their phones or on business channels like CNBC.

“Very often, investors will make a knee-jerk reaction that is to the detriment of their portfolio,” she said.

And they might wake up the next day to find that everything has changed, along with the balance of their investment accounts.