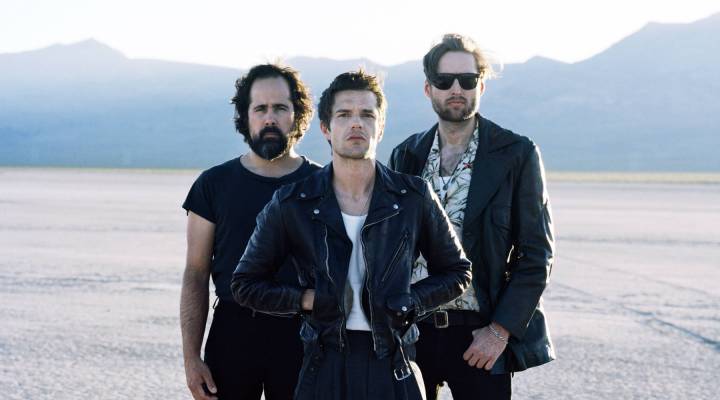 The Killers are back at it again with a new album, but over across the pond they haven’t actually left the charts since their massive 2004 hit, “Mr. Brightside.” That song has been in the Top 100 in the U.K. every single year, including 2017. You might think that means that single is the most prized possession of lead singer Brandon Flowers, but actually he tells us, it’s his wife — “I mean I’m hers and she’s mine.” Flowers and band mate Ronnie Vannucci Jr. joined Marketplace Weekend to take the Marketplace Quiz, and talked first jobs (a severed hand was involved), toothbrushes and career advice. Their latest album, “Wonderful Wonderful,” is out now.

Brendon Flowers: Ron, I’d like you to fill in the blank. Money can’t buy you happiness but it can buy you _______.

Vannucci: That’s stuff that makes your hair grow. Money can’t buy you happiness but it can get you a little hair.

Vannucci: What do you think is the hardest part of your job that no one knows?

Flowers: I’m not a social butterfly and I’m not the most confident person in the world. So sometimes it takes a lot more than people may realize for me to get up there on that stage and do what I do. I have a lot of reverence for people that have done it before me and have been great at it. I think that might be one of the harder things that people don’t recognize about me and my job.

Vannucci: What do you do to turn it on? What head space do you get into? Tell these people.

Flowers: I do everything from pray that I won’t embarrass myself [and] I’ve gained confidence over the years because I’ve done a lot of practicing, a lot of rehearsing. So that helps. Being prepared.

Flowers: Ron what was your first job?

Vannucci: I was a volunteer at the hospital and I worked in the histology lab at the hospital and I ran skin samples and samples of body parts and stuff. [At] one point there was  half of a hand, like the last two fingers [and I put them] in a plastic jar of formalin which is sort of a derivative of formaldehyde.

Flowers: They let you do that when you’re a kid?

Vannucci: I don’t know the story behind it but it looked like it had been burned too. It was really weird.

Vannucci: Brandon, real talk: What is your most prized possession?

Flowers: I mean I think it’s OK to say my wife, isn’t it? I mean I’m hers and she’s mine. You got to be careful nowadays about what you say.

Vannucci: Well I know but I think that’s tender and coming from an honest place.

Flowers: And we have been married now for 12 years. It’s pretty incredible.

Vannucci: What is the one thing everybody should own no matter the cost Brandon? I’m going to answer for you: Toothbrush

Flowers: Toothbrush is a good one. My mind went towards like can opener.

Vannucci: That’s good. You never know when you’re going to need to open up a can.

Flowers: What advice do you wish someone had given you before you started this career? I’ve got a fresh one, I’ll give you time to think.

Vannucci: What do you think?

Flowers: Don’t read reviews about your album or your live shows, just don’t.

Vannucci: Yeah, you’ve been reading a lot of them.

Flowers: I always do it.

Vannucci: I don’t do it. I’ll go down the bunny hole too quick and I get all bummed out and I’ll just get snarky and that’s not good for anybody.

[Mine is] listen more. It’s sounds so simple but I’m still working on this. I just think listen more in every way. Listen more, talk less.