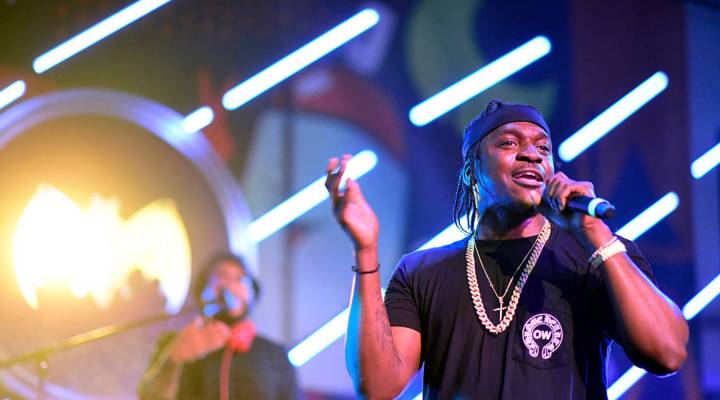 Pusha T released his latest album, “King Push – Darkest Before Dawn: The Prelude,” recently and took some time out to take our quiz.

When I started my career, I wish someone would have told me to keep it all business at all times. You know, I came in the game so lackadaisical. I came in the game with my friends, my best friends, and my brother, and it was such a family-oriented thing. And I carried some of that family love and trust … I put that on record labels and things like that. It didn’t always work out in my favor, thinking you know, “this is a team effort.” But, this is really a business, a shrewd business.

I realized music could be a career early, maybe the 90s, when super producer Teddy Riley moved to my area. And he had a yellow Ferrari driving down Virginia Beach Boulevard. And I was like, “Wait a minute, that’s a real Ferrari that I see on tv, and it’s all from music, and this is a real thing.”

Then he went and shot a video called “Rump Shaker,” which was probably the hottest record for about two to three years, and he shot it in Virginia Beach. And I was like, “ah, this is even a realer thing.” You know, all of the women within that video that I thought were out of reach were actually close in the area, and you know, as a youngster, I was like “wow, this is an amazing thing.”

The hardest part about my job that no one knows is dealing with interviews that aren’t really when the person isn’t really well-versed with your career.

My most prized possession? I love my car so much, I have a [Porsche] 911 Turbo S, it’s everything, it’s black with ox-blood red interior. I love it … and I don’t even get to drive it that much.

My first job was probably when I was 13 years old, and I worked at this restaurant — a seasonal super fancy restaurant, Blue Pete’s Seafood — and I was a bus boy, and I probably shouldn’t have been working at that time, but I was. It was something you just did for the summer, and it was great.

What was something you bought that you now completely regret buying?

Something that I bought that I completely regret buying … I would have to say a plethora of clothes, man. I have so many clothes, and I’m like, really over it. I’m realizing that I really just want to wear one uniform everyday, or something close, like something super super super similar. And I feel like that’s even a better thing for me to do, if I can find this perfect uniform, then I wouldn’t buy clothes ever again.