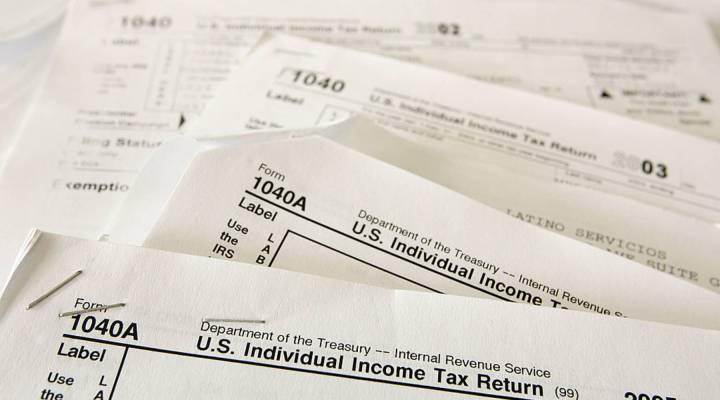 COPY
Anticipating a high volume of calls and the ensuing backlog, the IRS is urging people to prepare as much as possible this tax season. Justin Sullivan/Getty Images

Anticipating a high volume of calls and the ensuing backlog, the IRS is urging people to prepare as much as possible this tax season. Justin Sullivan/Getty Images
Listen Now

Among the tax breaks Republicans are eyeing in their plans for tax reform is the state and local tax deduction. That’s the part of the tax code that lets you write off some of your state and local payments.

According to the Tax Policy Center, eliminating the deduction could increase federal revenue by nearly $1.3 trillion over a decade. There aren’t a lot of places in the tax code where lawmakers can find that much money.

But the prospect of losing the deduction has state and local officials around the country, from both parties, fighting hard to keep it.

Mayor Bryan Barnett, a Republican from Rochester Hills, Michigan and second vice president with the mayors conference, echoed the point. “This ‘reform’  is not a gift,” he said. “To a majority of people in my community, this is taking money out of their pocket and saying they are going to give them something back after they paid for it. It doesn’t make sense and it’s not real reform.”

The state and local tax deduction has been a part of the U.S. tax code for more than 100 years, since back when the federal income tax was introduced. The idea behind it appears in The Federalist Papers. Alexander Hamilton worried the federal government might try monopolize taxation — to the “exclusion and destruction of state governments.” Over time, the ability to write-off state and local taxes has been baked into the tax code and how local governments fund themselves.

The deduction functions as an “indirect subsidy for state and local governments,” said Frank Sammartino, a fellow at the Tax Policy Center.  That’s because people who pay the taxes don’t bear the full cost of the taxes.

“What it does is essentially rebate the a portion of state and local taxes for people who claim the deduction,” Sammartino explains.

If the state and local deduction goes away, it could increase the amount of taxes that many people have to pay. That wouldn’t have a direct impact on those state and local budgets immediately. But over time, taxpayers might start pushing to pay less. They might reject local tax proposals.

“If I can’t write it off on my taxes, then it is costing me more money,” said Jamie Nicholson, Finance Director for the city of Pataskala, Ohio, and member of the Government Finance Officers Association, “so I’m going to vote no.” Research from the association estimates that up to 30 percent of taxpayers could be hit by the end of the deduction.

Hardest hit will be wealthy states with high tax rates, like California and New York. But eliminating the deduction would affect districts and communities in all 50 states.

“This is not at all a red state vs. blue state issue,” said Scott Pattison, head of the National Governors Association. He said federal lawmakers are getting an earful from local officials — lobbying to keep the deduction.

Local and state government advocates say they will all get squeezed, if federal lawmakers target this part of the tax code.