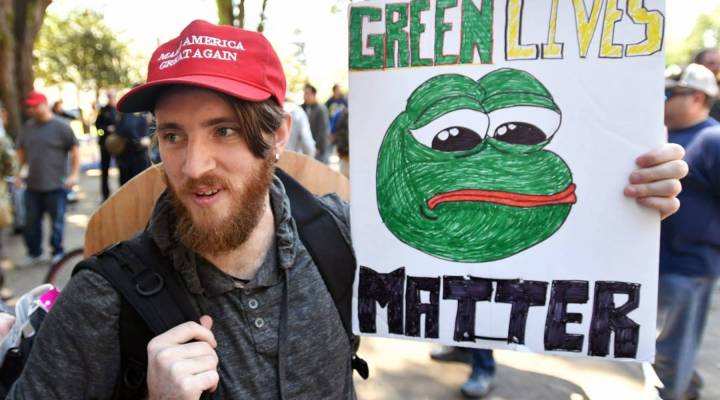 COPY
Andrew Knight holds a sign of Pepe the frog, a conservative icon, during a rally in Berkeley, California back in April of this year. JOSH EDELSON/AFP/Getty Images

Andrew Knight holds a sign of Pepe the frog, a conservative icon, during a rally in Berkeley, California back in April of this year. JOSH EDELSON/AFP/Getty Images
Listen Now

In the weeks since the violent clashes between white supremacists and counterprotesters in Charlottesville, Virginia, many hate groups have found themselves no longer welcome on some major tech platforms. Facebook, Google and Cloudflare have all refused to offer basic hosting or social media services to them. So have some crowdfunding and payments transfer platforms, including Paypal.

Other platforms, however, are filling in the gap.

The neo-Nazi website The Daily Stormer, for example, was able to use web hosting services in Russia and Algeria to get its website back online. Those who’ve been kicked off Twitter or resent its speech policies have an alternative in Gab. And many individuals and causes celebres of the far right are finding ways to raise money through crowdfunding alternatives like Hatreon.

“To me it’s a simple act of defiance,” said Cody Wilson, founder of Hatreon. The name, Hatreon, is a combination of “hate” and “Patreon,” a crowdfunding site that has banned individuals and fundraisers associated with hate groups. Wilson resents platforms like Facebook or Patreon that decline to offer services to certain groups because of their ideological bent.

Among those raising money on Hatreon is Richard Spencer, who advocates for a white homeland and coined the term “alt right.”

Wilson gained fame for developing designs for people to 3-D print their own guns.

“I haven’t built a business yet that wasn’t kicked off of Paypal,” he said. “So very early on we realized we had to build our payments networks,” he said.

Payment networks like PayPal and Stripe are normally used by individuals and crowdfunding sites to facilitate donations. There is a demand, said Wilson, for versions of these services that don’t care who their users are, as long as those users are within the law.

“Like the marijuana companies, for example. There’s all types of gray market communities on this side of legal who have had trouble getting access to legacy payment solutions,” Wilson said.

But for all the potential demand, Wilson’s decision to host a fundraising platform used by white supremacists is ideological; it’s not a money maker.

Other platforms do see a gainful business model in the reluctance of Silicon Valley companies to offer their services to hate groups.

“I think this creates a great business opportunity for me and for others,” said Charles Johnson, a controversial blogger who was himself banned from Twitter for his trolling and who now runs WeSearchr, a crowdfunding site that’s currently being used to raise money for a variety of causes and activists.

“We’re willing to take the fundraisers that others are not willing to take,” Johnson said, and he charges them a slight premium for it. WeSearchr takes 15 percent of all the funds raised, compared with competitors who take 8 to 10 percent. “We’ve brought in a little more than a million dollars in contributions,” Johnson said.

An alternative to Twitter that is available to hate groups and has drawn a base among those with extreme views is Gab. It has also raised more than a million dollars from donations and voluntary user fees. Utsav Sanduja, Gab’s chief operating officer, views much of Silicon Valley as left leaning, politically correct, venal and dictatorial. He sees Gab as a source of refuge. Gab, he said, is ideologically opposed to the use of advertising revenue and instead asks users for donations.

Protecting the First Amendment is a common justification for platforms that don’t reject extremists and hate groups, but Heidi Beirich, head of the Intelligence Project at the Southern Poverty Law Center, argues the First Amendment isn’t being violated when GoFundMe rejects an extreme cause or Twitter kicks someone off for trolling.

“No one ever said the First Amendment said you should have access to millions and millions of people,” she said. “We would rather have white supremacists over on Gab where their audience is much more limited than over on Twitter where millions of people could potentially see their views.”

Mainstream platform Twitter has 328 million monthly active users. Gab has 225,000. Mainstream crowdfunder Patreon has a million donors; Hatreon has around a thousand. Kickstarter has raised more than $3 billion; WeSearchr is only at around a million. The uncensored alternative to Silicon Valley is certainly a market, but a niche one.