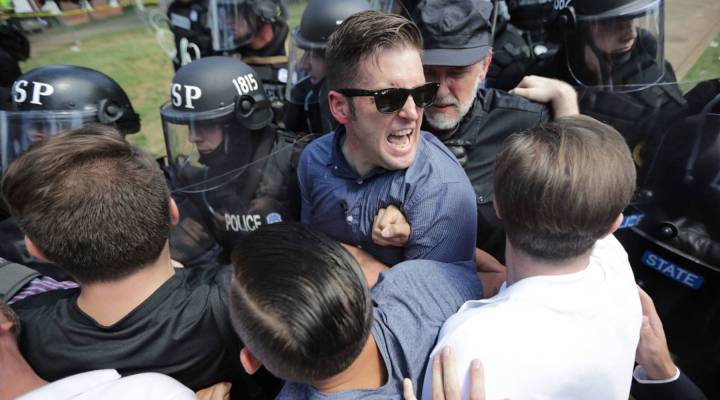 Airbnb, GoDaddy, Google — they’ve all said to white supremacist groups in so many words: Move on along. Not here. You’re not staying with us and your websites aren’t welcome.

But while mainstream sites are starting to crack down on groups like these, fringe sites are popping up to fill the resulting vacuum.

Matt Pearce, a national reporter for the LA Times, joined us to talk about some of these platforms and why they’re supporting neo-Nazi groups.

Sabri Ben-Achour: So mainstream providers have made headlines in recent days for banning hate groups and their members from using their services. But, you know, the Internet is a big place. Do we have any sense of whether it’s actually getting harder for extremist groups to operate online in the U.S.?

Matt Pearce: The thing that happens with white nationalist groups is usually when they get publicity, crackdown follows. So right now Daily Stormer, which is the most popular neo-Nazi website in America, lost its hosting with GoDaddy and Google. Another website, American Vanguard, when I last looked, it had been shut down by WordPress. So yes, right now it’s getting more difficult for them to push their message out and respond to this event that’s happened.

Ben-Achour: In your reporting, you talk about how some of these extremist groups got around some of these sort of denial of services. They came up, for example, in Charlottesville with things like Nazi Uber or the Hate Van. And there’s a crop of small startups that you call a “shadow Silicon Valley.”

Pearce: You have things like Hatreon. It started as a response to Patreon, which is a website where artists and other people can get recurring monthly donations from their supporters in order to support their projects and what they’re doing. You see companies like that cropping up on the right in response to this kind of more mainstream crackdown, because there’s a demand out there for it. These companies will profit by taking a slice of the fees out of certain donations, so you know they get a cut for themselves. They profit. The far right has financial infrastructure for themselves so that they can fund the rallies, so that they can fund whatever their projects are.

Ben-Achour: The companies that provide these alternative parallel services — why are they doing this? Is it politically motivated or is it purely just about the money?

Pearce: It’s a little bit of both, though some of it’s about the concept of free speech in the 21st century, right? You go back 60 years ago — if the Ku Klux Klan wants to go rally in a park, it’s a public park. They’re protected by the First Amendment. They have the right to do that. The government can’t really crack down on them. But now in the 21st century, the public square has been privatized. A lot of the speech that we have is on platforms such as Twitter and Facebook. Which, you know, we don’t have First Amendment protections there, so if those companies decide that they want to crack down on people who have particular viewpoints, they can do that. So it was actually a range of motivations.